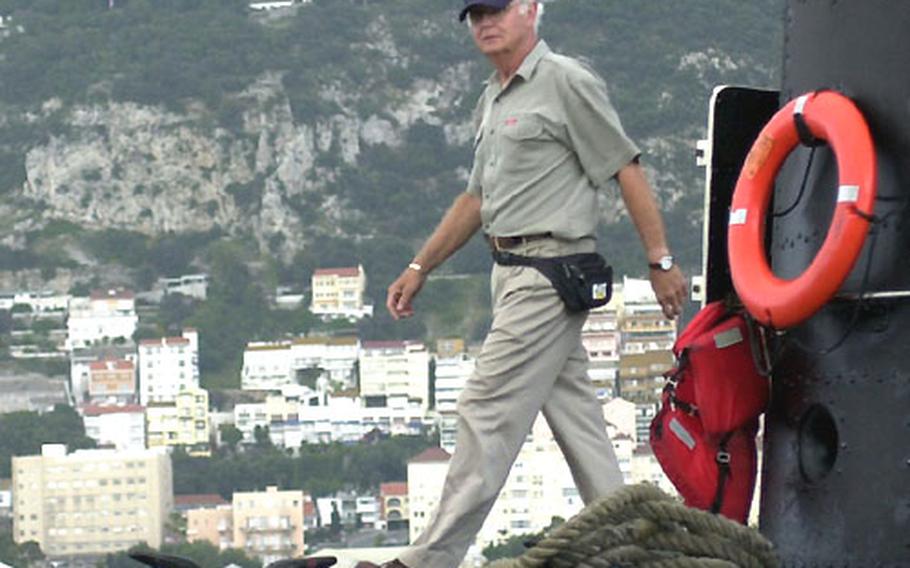 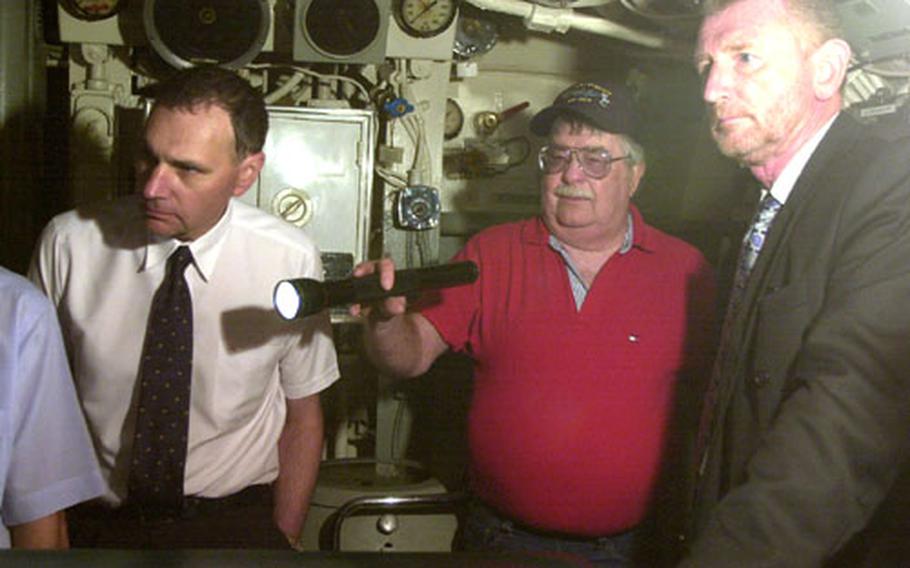 Max Bassett, 68, a retired Navy master chief, uses a flashlight as he gives a tour of the World War II-era submarine USS Razorback on Tuesday in Gibraltar. (Scott Schonauer / S&S) A group takes a tour of the torpedo room inside the USS Razorback on Tuesday in Gibraltar. (Scott Schonauer / S&S)

GIBRALTAR &#8212; Max Bassett squeezed his round frame through the submarine&#8217;s small vestibules with no problem but confessed it sure is a lot tougher to do at 68 years old. He once could almost fly from one end to the next when he served as a Navy engineman more than 40 years ago.

Bassett, a retired Navy master chief petty officer, served aboard the diesel-powered USS Razorback from 1959 to 1962. Now, he and other Navy veterans are back on the 60-year-old sub, helping tug the World War II-era boat from Turkey to the United States, where it will become a floating museum.

Bassett, former shipmate Bob Opple and a tugboat crew stopped in Gibraltar on Tuesday before making the trip across the Atlantic Ocean.

The journey might not be suited for retired, gray-haired grandfathers, but Bassett said seeing his old submarine being towed to its final resting place in the States makes him feel years younger.

How a group of veterans saved its precious sub from the scrap heap, bought it from Turkey and helped bring it home is an inspiring story that is almost too good to be true.

Veterans didn&#8217;t know the 312-foot vessel was still around until about three years ago, when they discovered that the Turkish Navy had planned to decommission the Razorback this year, 34 years after buying it from the U.S. government.

Opple, a retired submariner, was shocked that the Razorback was still around. He called Bassett and Maurice Barksdale, who served as a cook on the Razorback.

From that moment on, they would make it their mission to rescue the sub before it was dismantled, which U.S. government officials required as part of the deal when they sold it to Turkey in 1970.

With the help of donations, hundreds of veterans and the mayor of North Little Rock, Ark., they persuaded the U.S. State Department and the Turkish government to let the group buy it.

Last fall, the Turkish government sold the sub to the group for about $38,000 and officially handed it over on March 25. It was a dream come true for hundreds of sub vets who once served in what is known as the &#8220;Silent Service&#8221; because much of what they did was secret.

The ship is too old to sail to the States. That&#8217;s why the group must tow it to its final destination.

More than 650 veterans offered to help bring the Razorback to Arkansas, but Bassett and Opple are the only submariners making the trip. The group hopes to bring the sub, which went on four war patrols in World War II and took part in the formal surrender of the Japanese, to Arkansas on the Fourth of July.