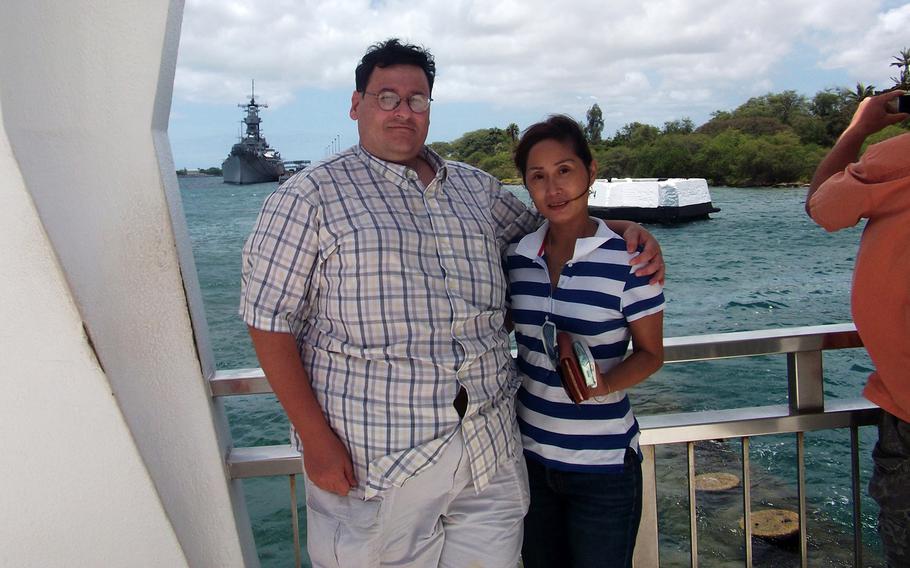 David and Li-Rong Radich pose at the USS Arizona Memorial in Honolulu. After his wife was brutally attacked in 2010, David Radich considered buying a handgun for self-defense, but laws currently prevent him from owning one on the U.S. Commonweath of Northern Mariana Islands. (Courtesy of David Radich)

David and Li-Rong Radich pose at the USS Arizona Memorial in Honolulu. After his wife was brutally attacked in 2010, David Radich considered buying a handgun for self-defense, but laws currently prevent him from owning one on the U.S. Commonweath of Northern Mariana Islands. (Courtesy of David Radich) 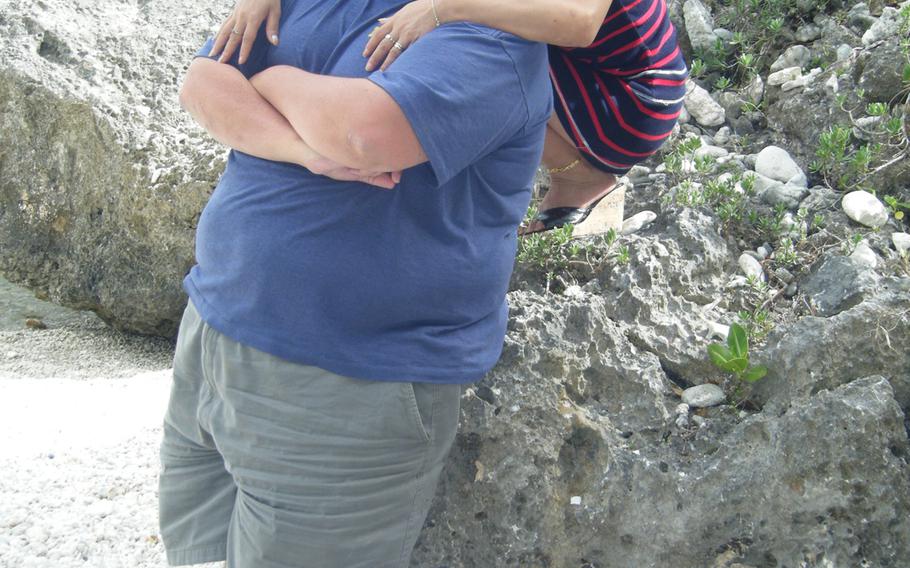 David and Li-Rong Radich at a beach on Saipan. David Radich has filed suit in U.S. federal court to allow him to possess a handgun in his home for self-defense. (Courtesy of David Radich)

A Navy veteran and his wife are challenging a ban on handguns in Saipan, arguing in federal court that the Commonwealth of Northern Mariana Islands is bound by the U.S. Constitution’s Second Amendment.

“I’ve always been a firm believer in our constitutional rights, whether that’s freedom of speech, religion or the right to keep and bear arms or right to privacy, and I’m pretty sure that what I’m doing in this case is in defense of those convictions,” said David J. Radich, 44, a former petty officer third class.

His wife, Li-Rong Radich, was severely beaten by an intruder in 2010, a trauma that her husband says might have been prevented if she had a handgun.

While the islands’ citizens can receive permits for a select few long guns, the law prevents them from possessing those for self-defense, even at home. Regulation of handguns varies in the four other inhabited U.S. territories. With differing degrees of regulation, they are allowed in America’s only other commonwealth territory, Puerto Rico, as well as in Guam and the Virgin Islands, but handguns are banned in American Samoa.

Injured in service Born in California, Radich, a former boatswain’s mate, served aboard the USS Vandegrift, a guided-missile frigate that participated in Operation Desert Shield’s Maritime Interception Operations in 1990. After a ship’s rope crushed his right hand, Radich lost his pinky and required extensive physical therapy. Although he was subsequently found fit for duty, he left the Navy in 1993 and enrolled in college, earning a degree in history and education. He taught school in the Detroit area.

Radich said he became comfortable around handguns after a doctor suggested that holding and firing one would be therapeutic for his hand. He bought one and used it for target practice.

Radich said he eventually wearied of the cold weather and general decay of Detroit and in 2006 took a job teaching earth science to seventh- and eighth-graders in Tinian, a sparsely populated island near Saipan that’s part of the Northern Marianas. He took a job as an environmental consultant on Saipan in June 2008.

Shortly thereafter, he met Li-Rong and they were soon married.

About 45 minutes after he arrived at work one morning in 2010, his wife called, sobbing, saying she’d been attacked. Radich called 911 and rushed home.

“I found my wife on the floor of the apartment in really bad shape,” Radich said. “Her face was unrecognizable.”

The attacker had broken into their home as Li-Rong was making breakfast, then began beating her and demanding money but ran out after she began screaming loudly, Radich said. She suffered broken ribs, an orbital fracture, bruises to the face and a concussion.

‘It’s an equalizer’ Radich said he began thinking about getting a handgun for his wife.

“I thought, well, it’s an equalizer. If my wife had had the ability to deter a crime …,” Radich paused. “Most people who defend themselves with a firearm never actually fire it. It’s the presence of the gun in the hand of the would-be victim that usually deters the crime from happening.”

Radich said he had general knowledge that handguns weren’t permitted on the islands and subsequently learned that private ownership was limited to .22-caliber rifles and .410-gauge shotguns.

“I’d contemplated getting a shotgun,” Radich said. “I’d looked at the application and didn’t apply because it says on the application, ‘Note: Self-defense or home-defense is not an acceptable reason.’ I wasn’t going to lie on the form, so I did not apply at the time.”

Court decisions cited Radich said the foundation advised him to apply for ownership of a handgun because two relatively recent U.S. Supreme Court decisions had established the right of private ownership. In District of Columbia vs. Heller, the Supreme Court in 2008 upheld a lower court’s decision that the District’s law banning all handguns was a violation of the Second Amendment.

“The District’s total ban on handgun possession in the home amounts to a prohibition on an entire class of ‘arms’ that Americans overwhelmingly choose for the lawful purpose of self-defense,” the narrow 5-4 decision concluded.

When it became clear the Department of Public Safety was not going to approve the permit, Radich’s attorneys in September filed a complaint in federal district court claiming the commissioner of the Department of Public Safety was enforcing an unconstitutional ban of handguns in the Northern Marianas through the Commonwealth Weapons Control Act. The act bans importation, manufacture, sale and ownership of handguns.

Radich’s attorneys argue that the Second Amendment must be followed because the covenant signed by the United States and the Northern Mariana Islands in 1975 that created the commonwealth provided that Amendments 1 through 9 are applicable there.

James Zarones, the assistant attorney general representing the government, has argued that the Supreme Court gave handguns constitutional protection because they were widely used by citizens in America’s 50 states.

But the islands’ people have never owned handguns, and therefore the commonwealth’s citizens have never “considered the handgun to be the quintessential self-defense weapon,” he told the newspaper.

Jurisdiction ruling Earlier this month, a U.S. District Court judge dismissed the case because the Department of Public Safety commissioner does not have jurisdiction over importation of handguns into the Northern Marianas. The judge gave the Radiches the option to continue their suit by filing an amended complaint that includes the import ban and names the Customs Service as a defendant.

The amended complaint is expected to be filed before Tuesday.

Asked whether he’s considered the Pandora’s box he might be opening in Saipan if he prevails, Radich said: “I think people are responsible for their own actions. Most of the people I know here are good people.

“I think it’s even an offensive argument because it implies that the people here are somehow incapable of handling freedom,” he said. “I think the people who are on this island are better than that.”