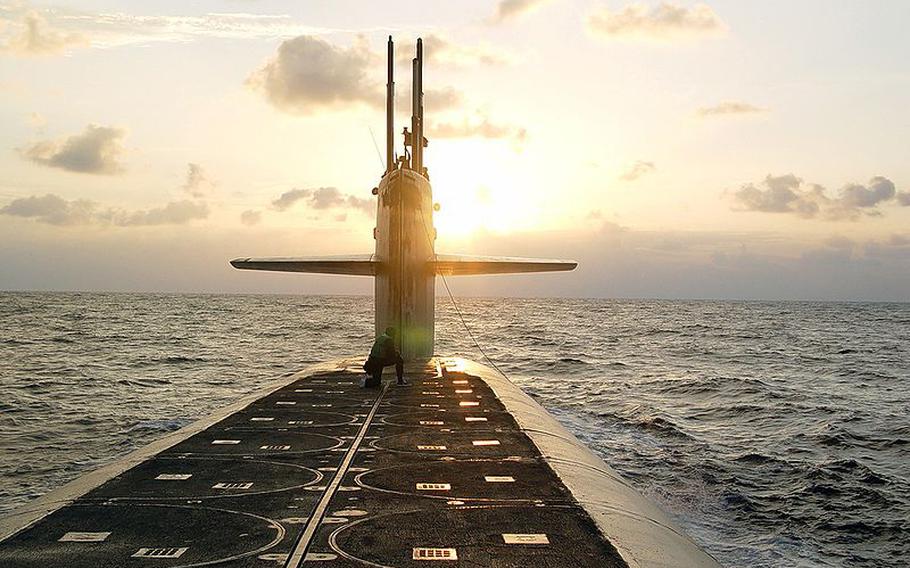 Little could have been done to prevent crewmembers aboard the submarine USS Wyoming, seen here, from secretly recording women showering on board, the Navy said in an investigation released Tuesday. (Rebecca Rebarich/U.S. Navy)

NAPLES, Italy — Little could have been done to prevent crewmembers aboard the submarine USS Wyoming from secretly recording women showering on board, the Navy said in an investigation released Tuesday.

“No amount of barriers will be able to prevent all illegal attempts to record personnel,” an unnamed investigating officer wrote. He said that “the upholding of standards and holding personnel accountable is the best method to prevent reoccurrence.”

Administrative measures such as counseling, extra instruction or loss of privileges were to be considered against the submarine’s leadership, according to a January review of the investigation by the commander of the Wyoming’s submarine group, also released Tuesday. More training may also be in order for the submarine community, according to the review. The report sidestepped the question of use by the sub’s crew of an electronic device.

Ten male sailors were punished earlier this year for the recordings, which were made during two patrols between August 2013 and June 2014 and shared among sailors in both rotating crews of the Wyoming, a ballistic-missile submarine based in Naval Submarine Base Kings Bay, Ga.

Investigators never determined how many videos were made or how many people viewed them. They recovered seven videos depicting three of the ship’s four female officers, but they were told of other videos of female midshipmen from the U.S. Naval Academy.

The sailors slid into a crawl space known as the “wine cellar,” which shares a bulkhead with the officers shower area, and held devices up to small gaps by the piping. Female officers use the shower area during designated times each day. The investigation concluded that foam could be used to cover the gaps, which are designed for a hull that contracts under pressure, but that might not be enough to prevent someone motivated from peering through the gap.

Following the conclusion of the investigation last December, the Navy instructed submarine crews to check shower-area bulkheads for recording devices and install foam in any piping gaps.

The report released Tuesday, was prepared for Navy Submarine Group 10 on the basis of more than 300 interviews. It sheds new light into an embarrassing case for the Navy as it integrates women into all-male submarine crews.

All of the accused were enlisted missile and electronics technicians on the Wyoming. Three of them recorded the videos, while the others were accused of sharing the videos or lying about their existence.

Investigators charged defendants with sexual misconduct, failing to follow regulations and charges related to bringing unauthorized portable electronic devices aboard a ship. Submarine regulations restrict electronic devices with cameras and screens smaller than 7 inches. All other devices must be registered, and none are allowed in the Mission Control Center, where the sailors entered before going to the crawl space.

A lawyer for one of those charged said the Wyoming had rarely before enforced its policy on devices and that other crewmembers carried unauthorized devices. The investigation said the sub adhered to its policy, which should remain in place.

Three of the seven sailors pleaded guilty at court-martial and received lesser confinements, docked pay and reductions in rank, while one sailor accused of conspiring to share the videos was found not guilty.

Rear Adm. Charles Richard, commander of Submarine Group 10 through this past July, wrote in his January review of the investigation that because Wyoming’s leadership bore only a small responsibility for the crew’s actions in this case, they would face nonpunitive actions.

Richard also wrote that he would recommend that the Navy’s submarine community go through a sexual assault prevention course known as “bystander intervention,” as well as training focused on reporting known violations.

The investigation began after a junior sailor aboard the USS West Virginia learned of the recordings from a Wyoming crewmember and alerted his boat’s senior-most chief petty officer.

The Navy is now training female enlistees and chief petty officers to serve aboard ballistic-missile submarines, with a future goal of women making up 20 percent of all submarine crews.