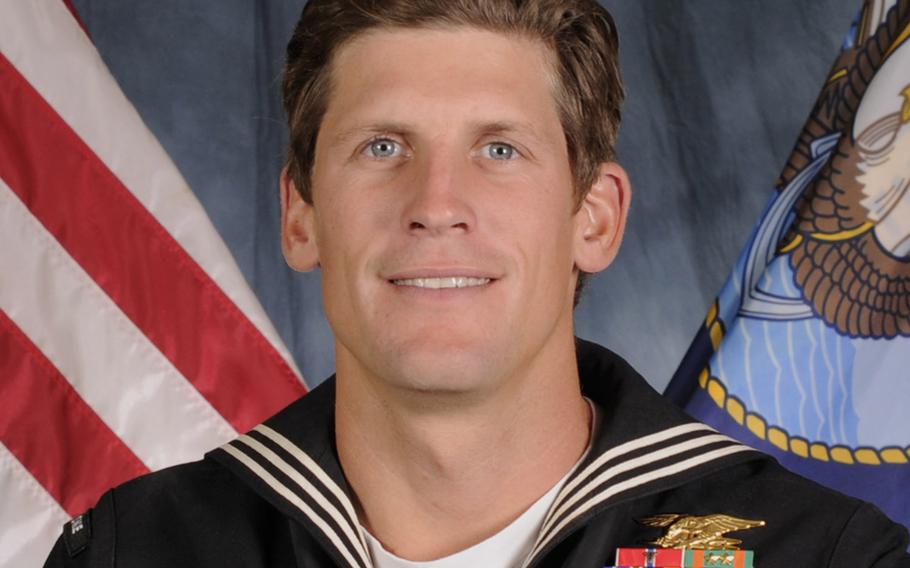 Among the medals announced on Jan. 13, 2017 was an upgrade from a Silver Star to Navy Cross for Navy SEAL Charles Keating IV, who died May 3 during a firefight in northern Iraq against the Islamic State group. (U.S. Navy)

The SEALs, including active-duty and former members of East and West Coast Naval Special Warfare Commands, had been previously awarded medals for their actions in the war on terror. The upgraded awards are part of the Pentagon’s review of all Silver Stars and service crosses awarded for actions in Afghanistan and Iraq since 2001.

Two of the medals were awarded posthumously, including an upgrade from a Silver Star to Navy Cross for Navy SEAL Charles Keating IV, who died May 3, 2016 during a firefight in northern Iraq against the Islamic State group. According to his Silver Star citation, Keating was honored for his role in assisting U.S. and peshmerga forces on March 4 fending off 100 Islamic State fighters.

“Today we honor some of our nation’s finest heroes, not just for their individual acts of courage and bravery in the face of danger, but for the everyday selflessness that they and their peers demonstrate,” Navy Secretary Ray Mabus said in a prepared statement.

The review, which Defense Secretary Ash Carter announced in February, looked at more than 1,100 Silver Stars and service crosses awarded since 2001. It was sparked by concerns that few Medals of Honor were awarded for the wars in Iraq and Afghanistan. Last week, Mabus announced that two previous Navy Cross recipients, whose names have not been released, were being recommended to receive the Medal of Honor. The Navy also did not release the names of the recipients recognized at Friday’s ceremony in Virginia Beach.

A ninth Navy recipient, who could not attend the Virginia Beach ceremony, is to be honored at a later date, the Navy said. Additional upgraded awards are expected to be announced in the coming weeks, the service also said.

“This generation of sailors, and particularly those serving as part of our Naval Special Warfare team, is an extraordinary group of men and women who have given so much to our country,” Mabus said. “Although today we recognize these individuals for their heroism and valor in combat, we are also honoring the sailors and Marines who fought beside them and those who are still in the fight.”

The Navy Cross, the Navy’s second highest decoration, is awarded for extraordinary heroism while engaged in an action against an enemy of the United States, the Navy said in a statement about the awards.

The Navy also said the Silver Star is awarded for gallantry in action against an enemy of the United States, while engaged in military operations with a friendly force.