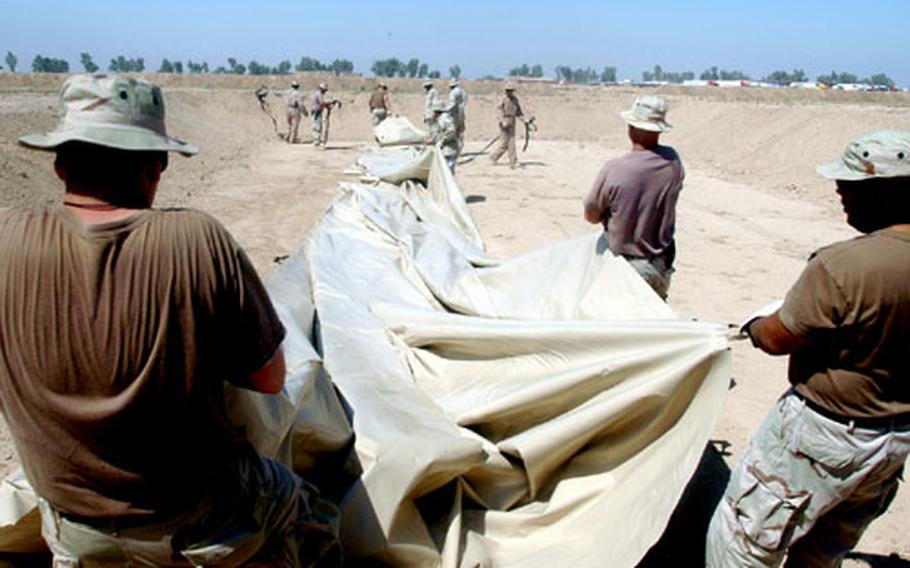 Sailors stretch out the plastic liner that goes under the fuel bladder at the "Bag Farm," also known as the Fuel Farm, at LSA Anaconda, Iraq. (Jessica Inigo / S&S)

LSA ANACONDA, Iraq &#8212; Although it appears as though the Navy has resorted to fields of waterbeds to make up for all the Iraqi sand, these sailors are actually not that homesick.

The 528th U.S. Navy Petroleum, Oil and Lubricants Support &#8212; as the Army likes to call the unit &#8212; is an interservice company with the Army&#8217;s 7th Transportation Battalion out of Fort Bragg, N.C., that keeps fuel flowing and wheels rolling.

In its Navy tongue, the company is known as the Navy Expeditionary Logistic Support Force (A) Forward, and is made up of 80 reserve sailors, known as the &#8220;Sand Squids,&#8221; out of California, Texas and Arizona.

It is a tactical fuel storage and refueling area covering about 12 acres.

Fuel, brought in from Kuwait and Turkey, is contained in hallow berms lined with plastic sheets underneath huge bladders of fuel that look like dusty waterbeds.

The sailors&#8217; main mission is to reconstruct the berms to proper specifications, according to Navy Lt. Lisa Otten, special projects officer.

The Army had set up the berms quickly and under harsh situations without much regard to proper specifications, according to Senior Chief Petty Officer Carl Arbogast, command senior chief.

Now, with more protection available, the Navy has time to redo the berms properly and to build more.

This is not to say it&#8217;s easy living at the Fuel Farm. Mortars and rockets are often lobbed at the camp, sometimes landing in the farm.

So far, there has been only shrapnel damage to two of the plastic coverings.

&#8220;This is hard work,&#8221; Petty Officer 2nd Class Michael Ellitt, aviation boatswain fueler out of San Diego, said about the reconstruction process. Sand, so fine it has the texture of talc, rises in plumes that look like smoke all around the sailors as they work to get the farm at full operational capacity. Right now, the farm can hold 3 million gallons of fuel and it is at 80 percent capacity. They&#8217;re working on boosting that capacity.

Part of the Navy&#8217;s mission also is to manage the Army&#8217;s contract with Kellogg Brown & Root, which does the actual fuel operations out of the farm.

As of Thursday, the Navy has taken on another mission. There are old bunkers on Anaconda that were used as storage for low-grade Iraqi fuel.

The Navy has been tasked with trying to pump the old fuel out and put higher grade aviation jet fuel in the bunkers&#8217; tanks, Arbogast said.

The 528th is a self-contained Navy unit that came to Iraq with its own fuels section, communications section, maintenance section, and administration and supply section.

The unit is divided between Anaconda and Taji, Iraq, where a smaller fuel farm is operated.