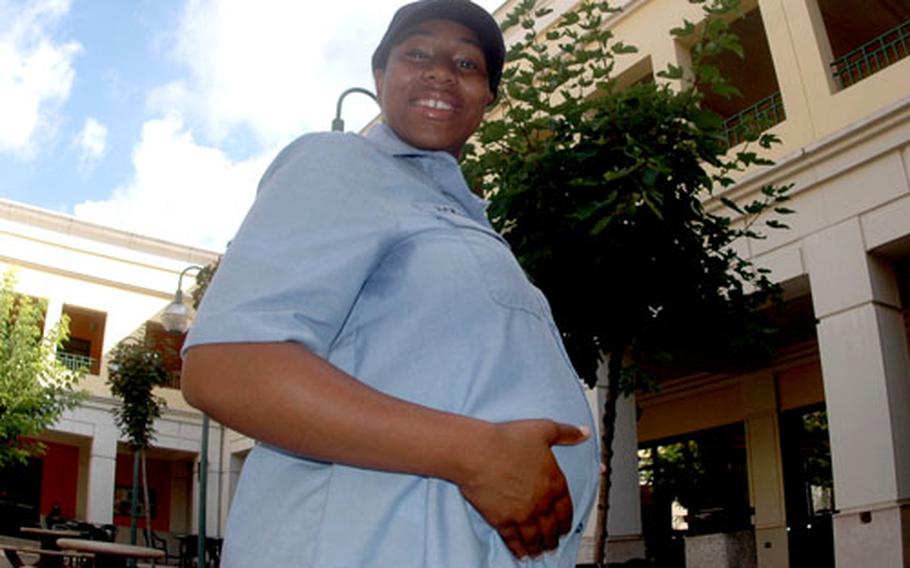 Petty Officer 2nd Class Dominique Jackson, 22, poses with her hands on her belly. Jackson was assigned to the USS Mount Whitney when she learned she was pregnant. Per Navy instruction, which states pregnant women cannot serve aboard ship after their 20th week, Jackson was re-assigned to Naples, Italy. (Sandra Jontz / S&S)

When the USS Bataan pulled out of port in Souda Bay, Crete, a few weeks ago, it left four sailors behind.

The commanding officer sent them ashore not because they were hurt, sick or in legal trouble.

And instead of heading to the Middle East to finish out their six-month deployments, the four are headed back to their homeport in Virginia.

And while it is not uncommon to have a sailor find out she&#8217;s pregnant while forward deployed, and at times already under way, Howard said, losing four sailors at once does not happen often.

Sailors are not permitted to have sex while onboard.

As late as the mid-1970s, getting pregnant meant leaving the Navy. But since then, the Navy has devised a 37-page instruction to deal with pregnant sailors. The rules ensure pregnant servicewomen have access to counseling, mandate when they must get back into shape after childbirth, outline maternity leave policy, set on-the-job limitations to safeguard the health of the woman and her unborn child, and order workplace support of breastfeeding servicewomen.

Pregnant women cannot serve aboard a ship after their 20th week of pregnancy or serve in forward-deployed locations.

And while the Navy seeks to balance the safety and well-being of its servicewomen and their unborn children with the needs of military missions &#8212; the equilibrium isn&#8217;t always struck, as pregnancy can compel women to sacrifice some of their career choices for their family.

Such was the case for Petty Officer 2nd Class Dominique Jackson, who was six months into her tour aboard the USS Mount Whitney when she learned she was pregnant. The news meant she had to find another job.

She had to give up a job she liked aboard the USS Mount Whitney and forfeit the sea-duty time she had been earning.

The Navy requires its career sailors to alternatively serve tours at sea and ashore. Sea duty includes tours aboard ships, but also includes assignments to units that deploy, such as Seabee battalions. The more tours of sea duty sailors serve, the better their chances are at promotion or getting preferred assignments.

Jackson said leaders in her chain of command were supportive, though they "hated the fact they had to lose me." She wanted to remain overseas instead of transferring to the States, and senior personnel hustled to find a job that fit. She transferred to the U.S. Naval Hospital in Naples, but there she would not be able to work in her career field as an operations specialist. So, she was sent on temporary duty orders to 6th Fleet, also in Naples, where she is part of the planning staff for future missions.

"I would have preferred to stay on board. I loved what I was doing," said the Jackson, Miss., native.

Jackson, who has served four years and intends to make the Navy a 20-year career, said she understands the policy that forbids pregnant women from serving aboard a ship.

The Navy does not track what percentage of its work force is pregnant or how many sailors have had to be transferred from ship or forward-deployed jobs because of pregnancy, Navy spokesman Lt. Cmdr. John Daniels said.

And while the USS Bataan will make due with four fewer sailors for its underway period, typically Navy detailers try to fill the jobs vacated by pregnant servicemembers, Daniels said.

The Bataan has a crew of roughly 1,100 sailors. On its current mission to the Middle East, the crew is joined by about 2,000 Marines from the 22nd Marine Expeditionary Unit.

Navy policy gives new mothers 12 months of guaranteed shore duty or reassignment, so when they are removed from a ship or a forward-deployed location, detailers work to fill the vacancy, Daniels said.

The Pentagon policy of letting pregnant women remain in the military started in May 1975 after several servicewomen claimed in court that the policy of discharging pregnant women was discriminatory, said Regina Akers, a historian with Navy History and Heritage Command.

Other factors contributing to the change included former Chief of Naval Operations Adm. Elmo Zumwalt&#8217;s efforts to improve quality-of-life issues in the Navy, and expand opportunities for women and blacks in the service, she noted.

"The DOD community and the country were responding to the end of the most unpopular war in the 20th century; and DOD instituted an all-volunteer force policy," Akers wrote in an e-mail.

"Moreover, the country was still reacting to the legal and cultural changes made during the women&#8217;s, civil rights, and anti-war movements of the 1960s. There was no shortage of opponents to having pregnant women remain in military uniform."