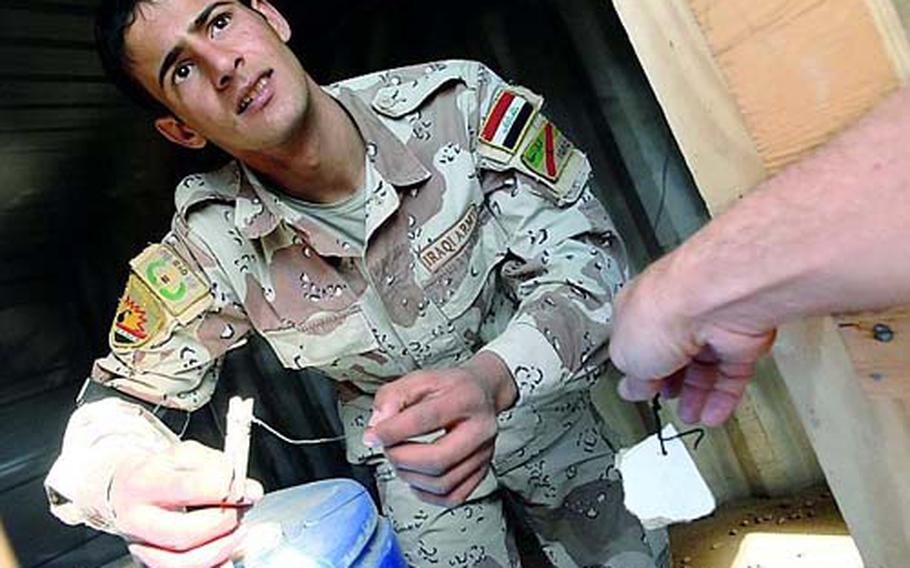 An Iraqi soldier learns how to disarm a bomb during an explosives training course at Forward Operating Base Warhorse, outside Baqouba, Iraq. (Heath Druzin / S&S)

BAQOUBA, Iraq &#8212; A collection of red metal shipping containers at Forward Operating Base Warhorse is littered with wires, rockets and land mines. Iraqi soldiers gingerly open the containers&#8217; plywood doors and peek under carpets inside, searching for anything suspicious.

The soldiers are from the 5th Engineers Bomb Disposal Company, the equivalent of U.S. explosive ordnance disposal teams that scour the roads for bombs and respond when soldiers happen upon explosives.

The course is designed to teach the Iraqis how to find and disarm explosives. It&#8217;s hands-on experience in a field that offers few second chances in the real world.

Such training is especially relevant in Diyala province, where booby-trapped houses and roadside bombs are a persistent problem &#8212; especially for the Iraqi security forces &#8212; and the insurgency is more active than in much of the rest of Iraq.

"These guys are definitely kept on their toes," said Navy Petty Officer 1st Class Frank Alzalore, who was instructing the Iraqis.

More than 1,500 U.S. troops have already been through the course and the Navy hopes to train 150 Iraqis at Warhorse, Alzalore said.

At least six U.S. soldiers have been killed and several injured in the past year by explosives placed in houses in Diyala province. Numerous others have been injured by roadside bombs. Recent attacks, however, have overwhelmingly targeted Iraqi security forces.

Across the country, Iraqi police and army units are taking the lead on explosives removal and disposal under the tutelage of U.S. forces. The deadly job has already taken a toll on the Iraqi 5th Engineers, whose members were training at Warhorse: One soldier was killed by a roadside bomb and two have been seriously injured.

"It provides security for innocent people. We save lives," said on Iraqi private when asked about the payoffs from the dangerous job.

The Iraqi police also have explosives disposal teams, but they are far behind their army counterparts when it comes to equipment, Alzalore said. They often must work with nothing more than wire-cutters and their weapons, and sometimes dispose of explosives by shooting at them with sniper rifles.

The Warhorse training complements a 12-week course in Besmaya that is required for all Iraqi bomb disposal team members. The Iraqis still have work to do &#8212; the trainees missed a 3-foot-long Katyusha rocket perched on the roof of the shipping container &#8212; but they have improved immensely in the past couple of years, Alzalore said.

"We have transitioned to the point where they are responding to any incidents in their [area]," he said. "All we&#8217;re here for now is in a supporting role."

What the Iraqis lack is adequate pay and protection, according to members of the 5th Engineers, who asked to remain anonymous for fear of being fired.

One private, who has become a leading member of the team, said he is considering moving to the infantry because his hazard pay has been taken away and his vacation cut.

A lance corporal said once when his team came under fire while investigating a roadside bomb, the Iraqi soldiers there to protect them fled, leaving his team to defend themselves with a crippled vehicle that had a tire shot out by the attackers.

"When we go out we don&#8217;t have enough security," the lance corporal said.