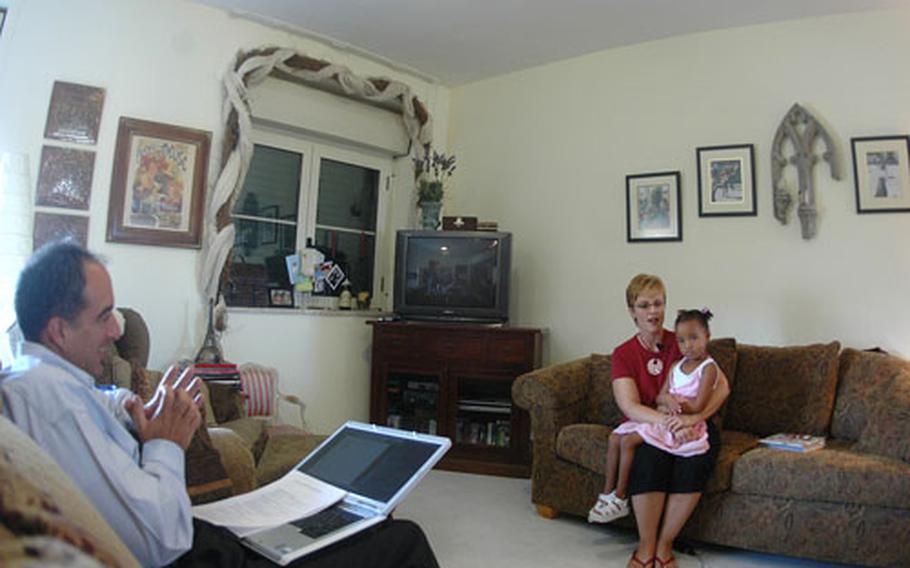 Jo-Ann Reale, with daughter Bella, 3-1/2, talks on camera about the warm community atmosphere she found in the military. She was interviewed by the public affairs office of Navy Installation Command. (Sandra Jontz / S&S)

Jo-Ann Reale is within days of having a new son.

It took a little digging for the Reales to find an adoption agency willing to work with a military family living overseas, said the soon-to-be-mother-of-five, who lives in Gaeta, Italy. &#8220;We kept hitting a brick wall. Finally, like, the sixth agency on our list was able to help.&#8221;

The Navy has embarked on an informational campaign to educate adoption agencies on the benefits of considering military families, even those living overseas, said Bruce Moody, a spokesman with Navy Installations Command.

He traveled to Naples, Italy, last week, taping interviews and snippets of daily life of military families who have adopted children.

The centers can refer families to local support networks as well as inform them about state and international adoption agencies, she said.

On Sept. 17, the Navy launches a new adoption Web page on the Fleet and Family Support Program Web site that will provide a wide range of information, such as state and national agencies that can help and an 84-page, step-by-step guide through the complex process.

Some adoption agencies reject military families for reasons including frequent military moves and requirements for lengthy residency or home ownership.

But more agencies have loosened restrictions after recognizing advantages of the military lifestyle, including medical care, special needs programs, and the military school system, Perdew said.

There might be disadvantages, especially with the nation involved in two wars and missions elsewhere. The association has linked up with the Rand Corp. to study the effects of deployments on children, Perdew said. &#8220;There is no really good data right now on how deployments might be affecting kids,&#8221; she said.

Many Internet sites offer information, including one put out by the National Military Family Association: