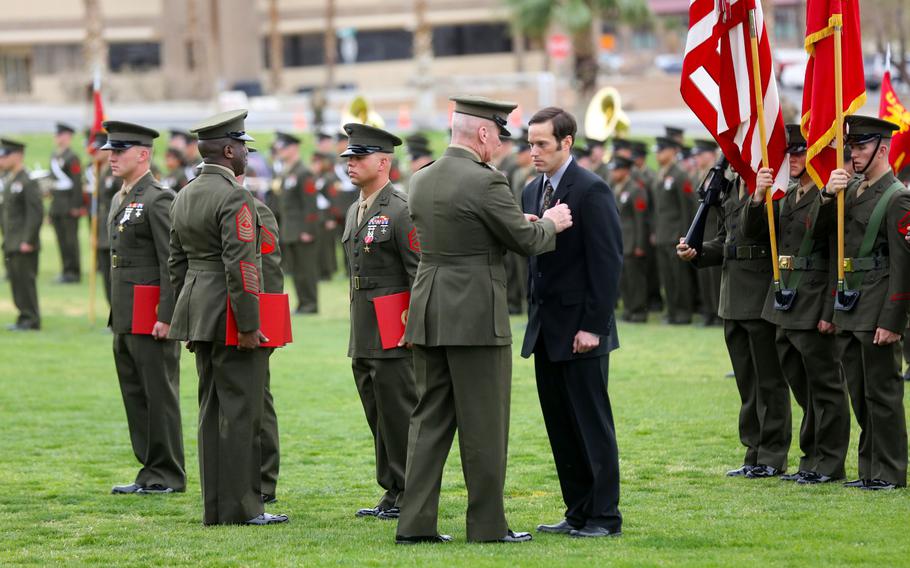 WASHINGTON – A Marine will receive the nation’s second highest honor for valor and four other servicemembers will be awarded the military’s third highest combat decoration during a ceremony Friday to upgrade medals that they were previously awarded for actions in Iraq and Afghanistan.

When the review was announced, Carter called it a “cautionary measure” to ensure troops were properly recognized for their battlefield bravery after concerns were raised by another review by Military Decorations and Awards program.

“It is appropriate that today we recognize these individuals for their outstanding actions in the face of incredible danger,” Mabus said in a prepared statement. “By honoring these five men, we honor the rest of you who fought beside them, and those who are still in the fight. This generation of Marines and sailors, like the generations who have come before them, are an extraordinary group of men and women who have given so much to our country, so much to all of us.”

Mendoza was initially awarded a Silver Star in February 2005 for his actions while serving as an assistance reconnaissance team leader in Anbar Province, Iraq in April 2004. While on a patrol, his unit was ambushed and the vehicle he was riding in was disabled by a rocket-propelled grenade, according to his award citation provided by the Marines.

“Mendoza organized and led five Marines in a charge across an open field, up a 10-foot berm, and across a deep and muddy canal to firing positions within hand-grenade range of the enemy,” the citation reads, noting his actions led to the deaths of 10 insurgents and the retreat of “many others.”

After observing several wounded Marines taking fire, Mendoza continued to attack the enemy as he moved “with complete disregard for his own personal safety” under machine gun and rocket fire to take a position that allowed an armored vehicle to evacuate a wounded Marine officer.

Brandau’s Bronze Star with “V” device for valor was upgraded to a Silver Star for his actions during more than 20 firefights with enemy forces during a six-day patrol in June 2012 in Helmand Province, Afghanistan, according to the award citation. His squad was attacked with machine gun and mortar fire almost immediately after being dropped into a remote village. Brandau “exposed himself to the enemy fire to accurately employ his weapon, enabling his Marines to maneuver to cover” and later sprinted 200 meters “through enemy fire” to recover a Marine who had been wounded.

Davis, a Marine section leader at the time, will receive the Silver Star for actions in Fallujah, Iraq in November 2004, according to his award upgrade citation. Davis’ unit was providing security for casualty evacuations when a convoy was attacked. When one of the Marines in his section was wounded, Davis left his vehicle and sprinted 40 meters to reach the injured servicemember, “exposing himself to a hail of enemy fire.” After he was wounded himself, Davis “used his own body to shield [another] wounded Marine” protecting him until other Marines could evacuate him.

Huth will have his Bronze Star with “V” device for valor upgraded to the Silver Star for his actions in Marjah, Afghanistan in July 2010, according to his award citation. When his squad was attacked, Huth provided effective machine gun fire and continued to engage the enemy even after he was shot in his right arm. He later helped evacuate other wounded Marines “without hesitation across exposed terrain” physically assisting them to the evacuation site and carrying them aboard the helicopter before being evacuated himself.

Atkinson, a hospital corpsman, will receive the Silver Star for continuously braving enemy fire to aide wounded Marines during a battle in April 2003 in Iraq, according to his award citation. Atkinson “selflessly exposed himself to enemy fire on four separate occasions” and provided “lifesaving” medical care to two Marines before assisting in evacuating them.

The Defense Department has reviewed more than 1,300 post-9/11 valor medals in the last year, including some 300 Navy and Marine awards. A Pentagon official said additional award upgrades in all four services are expected, but he declined to provide specific information.