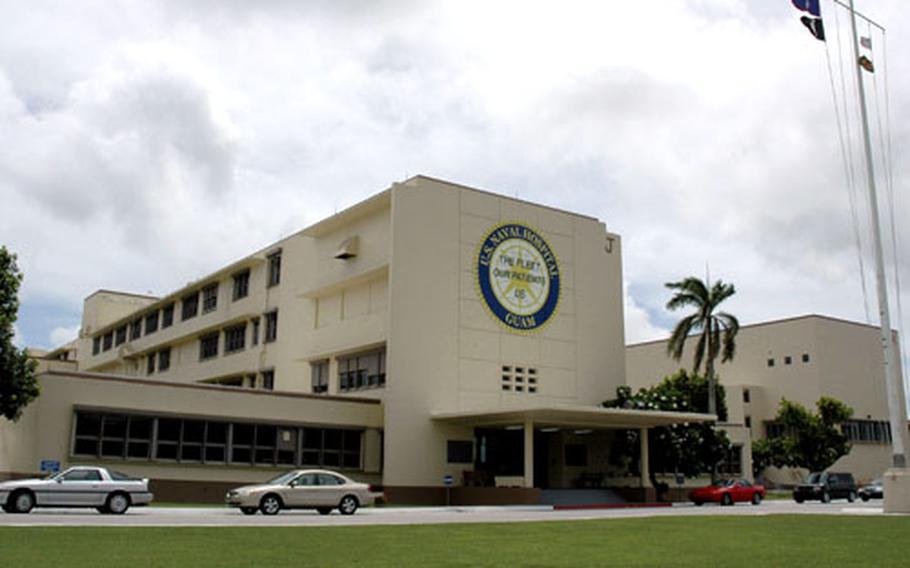 The U.S. Navy is planning to build a $300 million hospital to replace the current facility and prepare for the military buildup on Guam. (Teri Weaver / S&S)

U.S. NAVAL HOSPITAL, Guam &#8212; The Navy plans to spend almost $300 million on a new hospital here to replace an outdated facility and prepare for the influx of 8,000 U.S. Marines in the next few years, according to the hospital&#8217;s commander.

Even before the news that the military&#8217;s active-duty population on Guam would double in size, the Navy had planned to spend more than $200 million replacing the current military hospital, which was built in 1954, said Capt. Robert M. Kellogg.

&#8220;With the pending shift of Marines and their families, it became apparent that it wasn&#8217;t adequate,&#8221; Kellogg said in an interview last week.

Those plans now are being revised and expanded to accommodate the Marines, who are to join the 6,500 servicemembers already stationed on Guam. Counting these servicemembers&#8217; family members, Department of Defense workers and veterans, the new hospital will serve an estimated 40,000 people, hospital officials said.

Five decades after its construction, the current 10-wing building, with its mammoth hallways and high ceilings, costs too much to cool and creates long pathways between units that should be side by side, such as operating and recovery rooms, Navy officials said.

The Navy hospital serves as the care center for 20,000 military personnel and family members on Guam. Fewer than half of its 38 beds usually are full. The emergency room sees about 40 patients a day, and about 25 babies are born at the hospital each month, according to Lt. Brent Dennis, hospital spokesman.

Specialty care, such as for heart problems, a troubled delivery or a cancer diagnosis, requires treatment on Okinawa or in Hawaii, Navy officials said. With a new neo-natal ICU, the new hospital should eliminate some of those trips, they said.

Improvements also are to include a new, stand-alone veterans clinic accessible without entering the military base, Dennis said. Veterans can use the hospital facility only on a space-available basis under a Navy-U.S. Veterans Administration agreement, he said.

The 167 beds in Guam Memorial Hospital, the island&#8217;s only other hospital, aren&#8217;t enough for the 169,000 people currently living here, according to Lillian Perez-Posadas, Guam Memorial&#8217;s nursing director. People can wait in the emergency room there for up to two days for an admission, and on Monday, more than half of the hospital&#8217;s 12 neonatal beds were full.

In December, the hospital had to request off-island help to handle a spike in deliveries, which usually average around 250 a month, one nursing supervisor said. The nursing staff has a 15 percent vacancy rate, she said, and one of the island&#8217;s two cardiologists is planning to leave.

Guam Memorial also has expansion plans, though they&#8217;re conceptual at this point, Perez-Posadas said. For almost two decades, the hospital hasn&#8217;t been certified by the leading organization that rates health-care facilities, the Joint Commission on Accreditation of Healthcare Organizations, she said.

Servicemembers, their families and veterans turn to the Guam hospital and the local medical community for emergencies and magnetic resonance imaging, or MRI, exams. Statistics on how many military personnel and family members are treated at Guam Memorial were unavailable, but both local medical and Naval officials said it was a very small percentage.

Kellogg said both medical staffs work together and rely on each other, especially when maintenance of certain equipment &#8212; like X-ray machines &#8212; may force one facility to turn to the other for temporary help.

Kellogg said the Navy is aiming for a 2008 ground-breaking, with construction of a hospital generally taking three to five years.