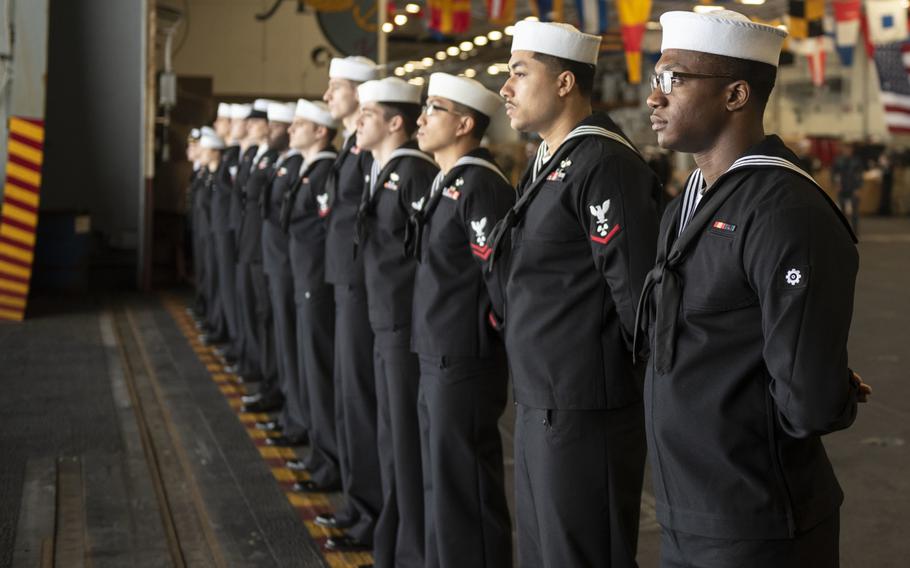 Sailors man the rails in the hangar bay aboard the Nimitz-class aircraft carrier USS Harry S. Truman in 2016. On Jan. 1, 2019, the punishment of bread and water confinement for the lowest-ranking sailors will be banned. (Sam Jenkins/U.S. Navy)

The age-old naval punishment of jailing junior sailors for three days with just bread and water soon will go the way of flogging and keelhauling.

The ban on bread-and-water confinement will go into effect Tuesday as part of an extensive change to the Uniform Code of Military Justice, which President Barack Obama signed into law in late 2016 and President Donald Trump amended earlier this year.

Bread-and-water confinement is a nonjudicial penalty that ship commanders can mete out to misbehaving sailors in the lowest three pay grades. It dates back to when warships had wooden hulls and sails.

Offenses that might earn sailors a bready diet in the brig are unauthorized absences, insubordination and lewd behavior.

When asked, sailors and former sailors were mostly in favor of the practice being scrapped.

“I did it once,” said Don Inbody, a retired Navy captain referring to a subordinate he punished with bread and water. “It’s time for it to go, though.”

Inbody couldn’t recall the infraction, only that it was a good sailor who did something out of character. The old-fashioned penalty was preferable to docking the sailor’s pay or demoting him, Inbody said, adding that it works best on smart sailors who think about what they did wrong instead of just getting mad.

A military justice review group recommended eliminating bread-and-water confinement, stating it was confident that commanders could render effective discipline through other punishments available under the UCMJ’s Article 15, as well as through nonpunitive measures, said Patty Babb, spokeswoman in the Navy Justice Advocate General’s office.

Some say the bread-and-water regimen isn’t as severe as it sounds. At most brigs, detainees eat as much bread as they can in 20 minutes, three times a day, and receive ample water.

Brenda Lettera, a retired sailor, said when she was a cook aboard the USS Frank Cable in the late 1980s, a man got three days of bread and water in a makeshift brig for running naked through the women’s berthing. She recalls delivering him two to three loaves each meal.

“They get to eat as much bread as they want during the time,” Lettera said. “Except for raisin bread. That wasn’t allowed.”

Aircraft carriers and the larger amphibious transport vessels are generally the only ships with enough space for a dedicated brig.

Sailors usually are transported to a shore facility for the bread-and-water treatment, said Chief Petty Officer Zach Winemiller, a sailor with a Tomahawk missile unit based in Naples, Italy, who saw a dozen such punishments when he worked three years at the former Naval Brig Puget Sound.

Detainees would receive a medical screening to ensure they could handle the diet, Winemiller said. They were given a loaf of bread each meal, which was always more than enough, and their cells had sinks to supply drinking water, he said.

Nevertheless, it’s an archaic punishment that the Navy has kept long past its time, Winemiller said.

“We hold onto traditions,” Winemiller said. “It doesn’t seem to be very effective. It didn’t seem to bother them (prisoners). They didn’t complain.”

He also thinks it was unfair to impose this penalty only on lower-ranking sailors in seagoing commands.

A sailor who worked in security aboard the USS Harry S. Truman in 2015 agreed that it’s a weak deterrent. The Truman’s sailors who were on restriction would get bread and water for violations such as failing to make a formation three times, and many became repeat offenders.

“We had one person miss so many musters and go through bread and water at least three times, so the captain recommended him to court martial,” said the sailor, who asked not to be named because of his current job as a criminal investigator.

Captains began dishing out bread-and-water confinement around the mid-1800s when the Navy eliminated flogging, said Dave Winkler, a historian with the Naval Historical Foundation in Washington. Hauling a sailor under the keel of a ship, a punishment employed by the Dutch and British navies, among others, was also banned in Europe in the middle of the 19th century.

Back then, spending time in the brig would’ve been like R and R because sailors would’ve gotten a break from their arduous daily work, Winkler said. Plus, a bread diet wasn’t much worse than the food they were normally fed.

This punishment might be antiquated but it’s not inhumane, Winkler said. He’s sorry to see it go.

“I thought it was one of those quirky customs that made naval service unique,” Winkler said.