Navy to reimburse personnel who paid for Italian plates 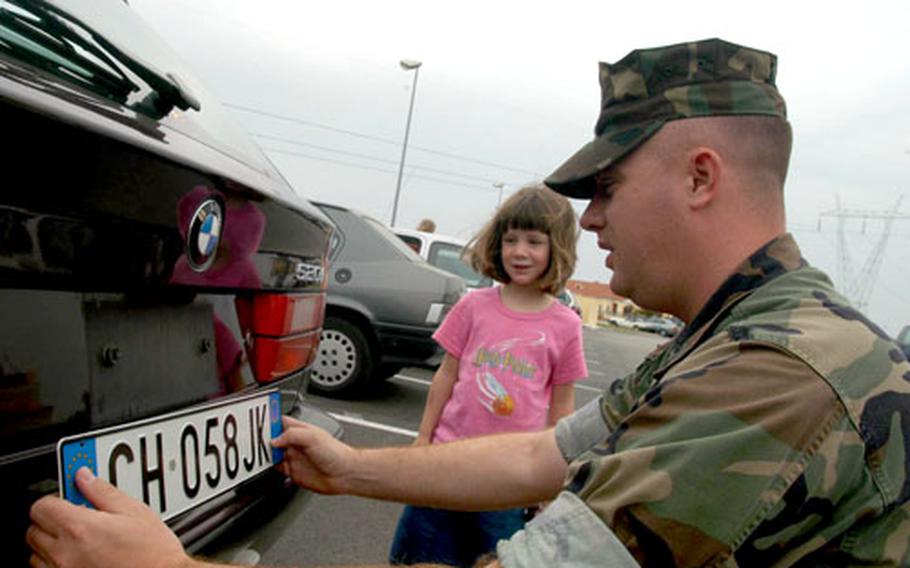 Many sailors and civilians at Navy bases in Italy will soon have a little extra spending cash in their pockets.

Local motor vehicle registration offices are to begin to refunding the 507,000 euros that motorists paid for their Italian license plates, known as cover plates, between April 24, 2003, and March 7, 2005.

The cover plates replaced the older style plates that identified vehicles as belonging to U.S. or NATO forces.

The AFI, or allied forces Italy, plates were white with the letters &#8220;AFI,&#8221; an identifying letter for the location of its issuance, and license number in black letters. Those with more than one vehicle had black plates with white letters.

When the policy to move Americans from AFI plates to cover plates was adopted, the Army and Air Force agreed to pick up the 40-euro tab for each car and 20-euro fee for each motorcycle, but the Navy determined that it could not.

However, since March 2005, Navy officials have been footing the bill and, as of next week, will start to issue refunds to those who paid during that two-year period.

Naval Support Activity Naples is the only one of the four Navy installations in Italy with a firm plan for the refunds, but other bases are finalizing theirs.

Naples&#8217; Central Motor Vehicle Registration Office, or MVRO, has posted a list of those eligible for refunds and the dates they can pick them up on its Web site: www.nsa.naples.navy.mil.

Sigonella MVRO director Jim Thompson said the delay is a result of the extra work the office is doing handling the large number of cars lost during December&#8217;s flooding and the registration of replacement vehicles.

The registration offices at Naval Support Activities Gaeta and La Maddalena are completing their reimbursement plans.

Those who paid the fee, but have transferred or left the Navy, will also get refunds.

Braun said that letters will be mailed to the individuals notifying them of the refunds. When they return the letter to their former command, they will have a choice of receiving the refund by check or by direct-deposit into their bank accounts.

Sailors still serving in Naples said they&#8217;ll welcome the refunds, although some also said they did not consider the fee exorbitant.

Petty Officer 2nd Class Jay Greene, a Seabee with the Naples Public Works department, is happy the Navy is paying for the plates and refunding the money.