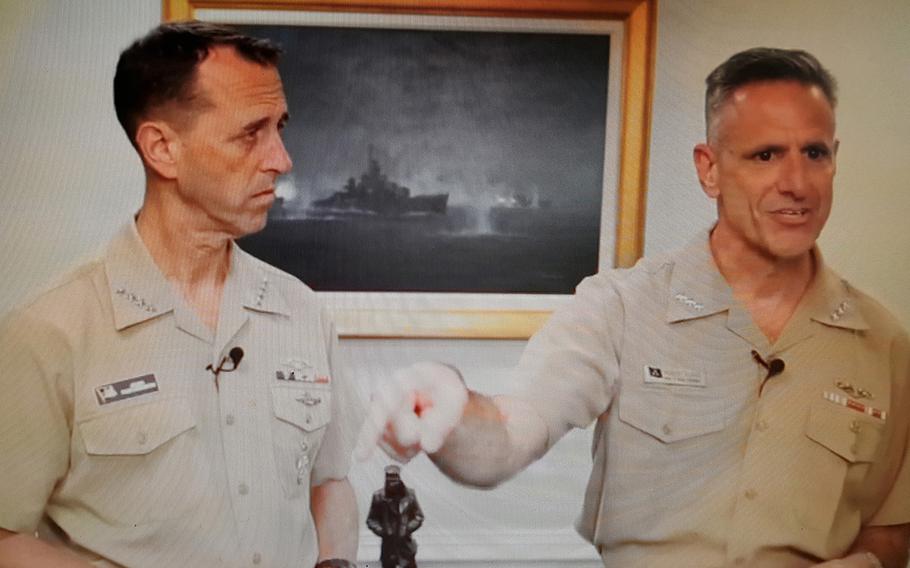 The Navy will promote petty officers who take “hard jobs in hard locations” as it expands its force to man a growing fleet, top service leaders announced Tuesday.

“We’re going to recognize talent, and we’re going to put that recognition in the hands of commanding officers who are closest to that talent,” Chief of Naval Operations Adm. John Richardson said during an online all-hands meeting.

He was joined during the live-streamed event by Adm. Robert Burke, chief of Navy personnel, who laid out steps the service is taking to retain and grow its cadre of sailors.

“It’s a good time to stay Navy. We want to retain our best talent,” Burke said.

The Navy is starting a pilot program called Advancement to Vacancy, which will reward chiefs and senior chiefs “eligible to take hard jobs in hard locations” with early promotions, Burke said.

Those hard jobs are located throughout the continental United States, Pearl Harbor in Hawaii and Iwakuni, Sasebo and Yokosuka in Japan.

Burke said he’s had positive responses from sailors about the planned program.

“We’ll pilot this, and if it works out, we’re going to expand it to as many paygrades as we can as fast as possible,” he said.

The Navy has also announced five sets of reenlistment bonuses this year, an “unprecedented” number in such a short period, Burke said.

The Navy has taken heavier-handed steps to fill high-priority positions at sea.

In June, the service announced it would begin requiring enlisted sailors to transfer from shore duty to sea billets where the need is critical.

Last year, the service announced it was ordering up to 1,100 chief petty officers back to sea ahead of their regular rotation in an attempt to fill almost 3,000 billets.