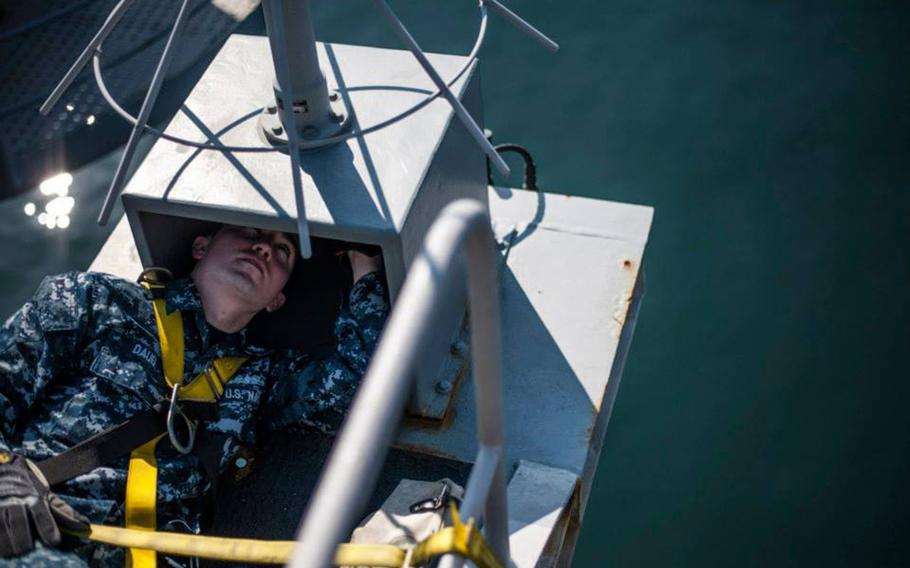 Petty Officer 2nd Class David Daub weatherizes an antenna cable on a catwalk on the USS George Washington at Yokosuka Naval Base, Japan, on Jan. 31, 2014. According to the Navy's personnel chief, the service will make some changes to its advancement system for petty officers. (Liam Kennedy/ U.S. Navy)

Petty Officer 2nd Class David Daub weatherizes an antenna cable on a catwalk on the USS George Washington at Yokosuka Naval Base, Japan, on Jan. 31, 2014. According to the Navy's personnel chief, the service will make some changes to its advancement system for petty officers. (Liam Kennedy/ U.S. Navy) Petty Officer 3rd Class Cedric Cross signals sailors to speed up the anchor aboard the USS George Washington at Yokosuka Naval Base, Japan, on Jan. 23, 2014. The value of petty officer evaluations will increase, while testing will lose some value in the promotion process under changes being made by the Navy. (Ricardo R. Guzman/ U.S. Navy)

YOKOSUKA NAVAL BASE, Japan — The Navy is making several changes to its advancement system for petty officers, including a formula that would add greater weight to performance evaluations and less to advancement tests.

The changes are part of a long-term, phased approach that could change the promotion quotas for the Navy’s many job ratings, Chief of Naval Personnel Vice Adm. Bill Moran wrote in a post on the Navy Times’ Facebook page.

“The majority of you seem to like greater weight added to performance — make the evals count more, make it less about who can pass the test or who hangs around long enough,” Moran said. “In general, I agree with you.”

The new formula, which could be introduced as early as the autumn test cycle, would minimize the importance of testing and increase the weight of evaluations even more, though exact figures have not yet been determined, according to Navy Times.

Multiple sailors who spoke with Stars and Stripes agreed with the changes, though some argued that the Navy’s evaluation system was subject to manipulation, and therefore, less indicative of a sailor’s abilities than other measures.

Seaman William McMillin said Tuesday that the changes, in particular at the E-6 level, should have been made a long time ago. Giving more weight to evaluations puts more focus on management ability at that level, he said.

“There are some great chiefs and first classes, but there are also a lot who don’t know how to lead,” McMillin said.

Petty Officer 2nd Class Guisela Quezada liked the idea of evaluation-focused promotions because of her own record, “but I’ve heard horror stories,” she said.

“I’ve been fortunate enough to have good leadership, so I’ve had good [evaluations],” she said.

Those who disagreed with the greater emphasis on evaluations said it takes value away from testing — which is objective — and gives greater authority to raters and their potential biases.

“Evals aren’t rated fairly,” said Petty Officer 2nd Class Felicia Oxendine. “You could have a guy who works hard and gets a good eval — and another guy who has the right connections and it (the evaluation) makes him look like a superstar when he’s not. It should be based on your knowledge.”

However, Oxendine liked another proposed change to the system that could mean fewer seniority-based promotions.

Sailors who pass tests but don’t get promoted accrue “passed, not advanced” points, or PNAs. Currently, those points are awarded to the top 75 percent of competitors — meaning that more sailors who are repeatedly passed over eventually get promoted.

Navy officials are considering awarding those points to only the top 25 percent of passed-over sailors. The change could mean more promotions for better-performing sailors with less service time.

Under the current system, “some people just advance because of [PNAs] when they don’t really deserve it,” Oxendine said.

Stars and Stripes reporter Trevor Andersen contributed to this report.