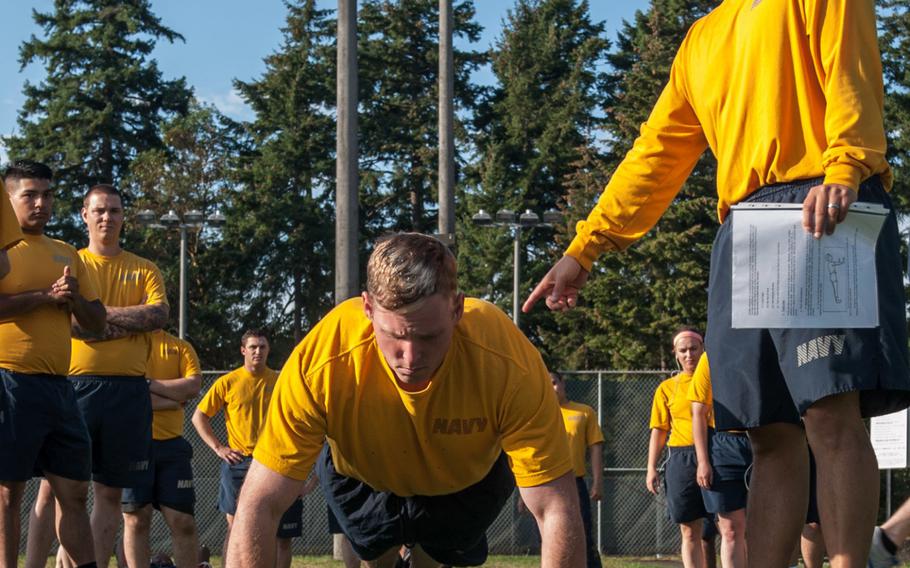 Petty Officer 2nd Class James Hiatt, from Kansas City, Mo., demonstrates the pushup portion of a physical fitness assessment in this Navy photo from 2014. New changes to the assessment to take effect in 2016 will emphasize the exercise portion of the test and relax body weight standards. (Photo courtesy U.S. Navy)

Petty Officer 2nd Class James Hiatt, from Kansas City, Mo., demonstrates the pushup portion of a physical fitness assessment in this Navy photo from 2014. New changes to the assessment to take effect in 2016 will emphasize the exercise portion of the test and relax body weight standards. (Photo courtesy U.S. Navy) 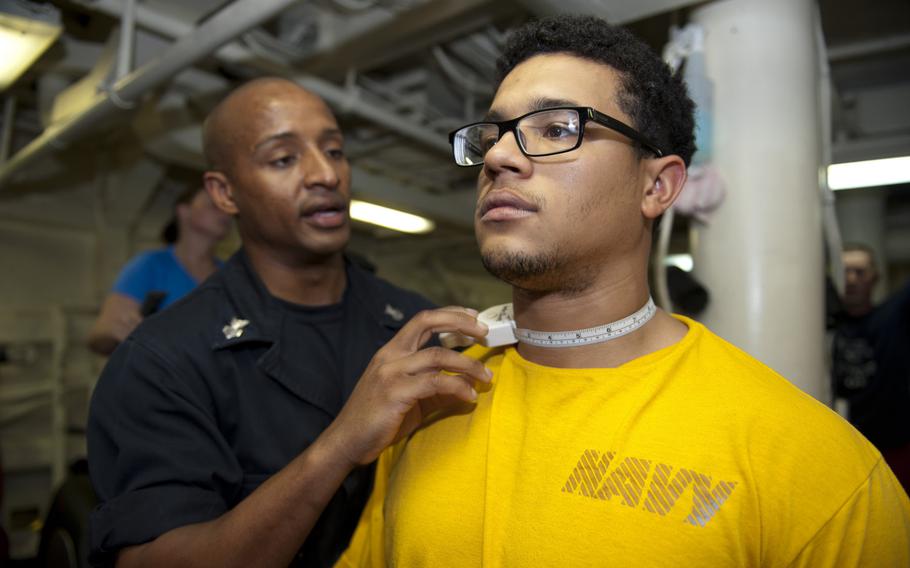 Petty Officer 1st Class Webster Bailey, left, measures the neck of Seaman Jordan Bransfield during a body composition assessment April 23, 2014, aboard the guided missile destroyer USS Arleigh Burke in the Persian Gulf. Changes to the Navy's physical fitness assessment to be introduced in 2016 will lower the emphasis on body weight in favor of more sailors taking the exercise portion of the test. (Photo courtesy U.S. Navy)

NAPLES, Italy — The Navy will relax the body weight standards in its physical fitness assessment beginning next year, as it moves away from what service leaders say is too narrow a gauge of health and physical ability.

New rules to be announced Monday and set to take effect in January will result in more sailors’ passing the body composition portion of the physical fitness assessment, or PFA, and participating in the exercise portion of the assessment, Navy officials said. Current rules prohibit anyone who fails the body composition portion from moving on to the exercise test.

The new rules add a single-step abdominal measurement for those who don’t meet the Navy’s maximum weight allowances by height, and they raise body fat limits to a maximum 26 percent for men and 35 percent for women, following Department of Defense standards. They also reduce the number of permitted failures to two in three years from three in four.

Navy officials said the changes are the first step in the Navy’s move away from an emphasis on body size and toward strengthening the exercise test, known as the physical readiness test, or PRT.

“I want them taking PRTs,” Chief of Naval Personnel Vice Adm. Bill Moran said of the changes in a video released by the Navy. “I want them testing. I want them physically active. That’s going to improve our overall health at the end of the day.”

The fitness assessment is held twice annually. Last year, around 5,000 sailors failed at least one of the two cycles, according to the Navy, the majority because they didn’t pass the body weight portion, known as the body composition assessment, or BCA. Only those who exceed the Navy’s maximum weight allowances by height are currently required to “tape-in,” or have their body fat percentage calculated by measuring neck and abdomen circumference.

Current rules call for sailors who fail three physical fitness assessments in four years to be separated from the Navy.

As part of the new guidelines, the Navy will erase all but one prior failure from sailor records in January, and it will give those currently being separated for fitness reasons a chance to stay on, provided they pass an exercise test by Dec. 1 of this year.

The service will also overlook body composition failures in this year’s fall cycle, although it will require all medically cleared sailors to take the exercise test; failing the exercise test will still result in failure of the full physical fitness assessment.

The new rules keep the same maximum weight allowances but add the single-site abdominal measurement before the traditional taping. Male sailors with an abdominal circumference less than or equal to 39 inches will pass the body composition portion and move on to the physical readiness test, as will females with a measurement at or below 35.5 inches.

Those who fail the abdominal measurement will need their body fat composition calculated, using the current taping process measuring neck and abdomen circumference. Even with new body fat maximums, sailors must meet new limits for their age range. Those falling outside their range but under the maximum overall limit will still pass but be enrolled in their command’s fitness enhancement program, or FEP, as well as nutritional counseling.

The new rules also emphasize commander spot checks, or quick assessments of a sailor’s health outside the physical fitness assessment.

“It’s not a punitive measure,” Moran said in the video. “It should never be taken that way. It’s more of a way to say, ‘Hey shipmate, I’m worried about you, let’s go do the test. If it shows we need to get you on a program to better health, then let’s do that.’”

The new physical fitness assessment guidelines are part of a broader effort by Navy Secretary Ray Mabus and service officials to emphasize a more holistic look at health and wellness over strict measurements. In a June directive, Mabus asked the services to update nutrition plans, increase access to base gyms, perform fitness spot checks and recognize those who exceed fitness requirements.

Navy officials have said the range of body types across the service make assessing proper body composition difficult. They’ve suggested the body composition assessment may be thrown out altogether in the future as other means of testing health become available, including the use of devices to measure sleep cycles, heart rate and blood pressure. The Navy is currently running trials of those devices and other tests throughout the fleet.

Not all sailors have welcomed talk of changing the fitness assessment. Some say loosening body composition requirements will have a negative effect on the service.

The exercise test may be strengthened in the future, officials say. The physical readiness test currently consists of curl-ups, pushups and a timed 1.5-mile run or similar cardio activity.