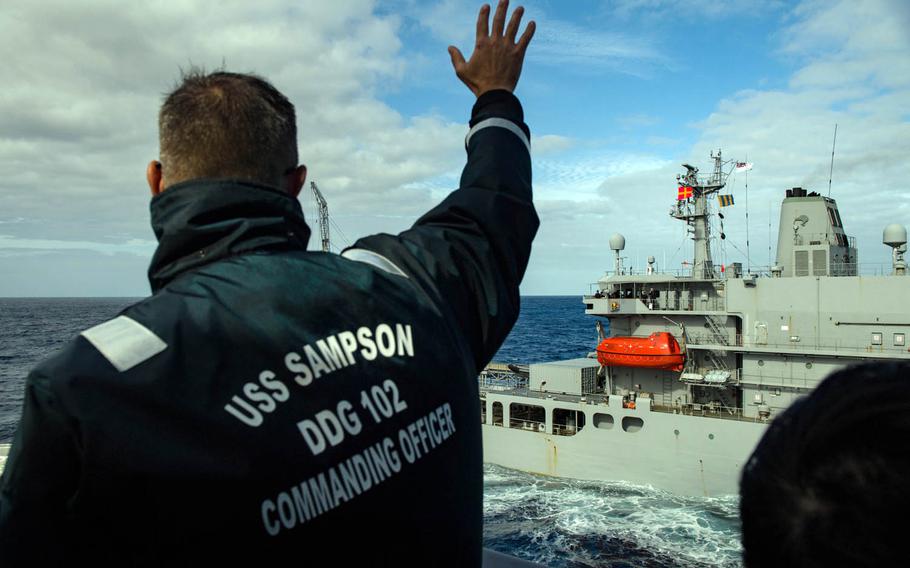 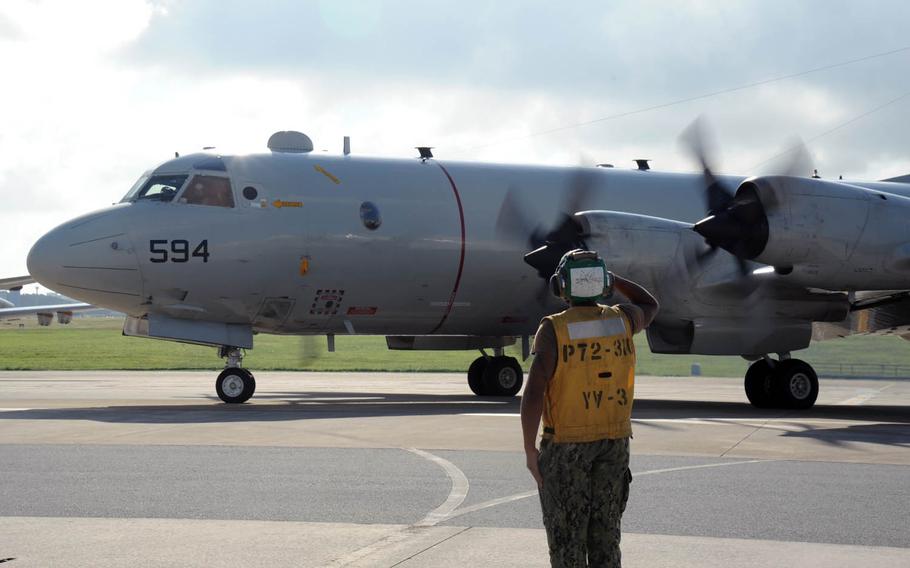 Petty Officer 3rd Class Ralph Topps from the Golden Swordsmen of Patrol Squadron 47 salutes the pilot as a P-3C Orion begins to taxi to the runway in late October at Kadena Air Base, Japan. (Joshua Walters/U.S. Navy photo)

The Navy is helping New Zealand emergency services respond to a series of earthquakes, including sending the first U.S. warship to visit New Zealand in more than 30 years.

The Navy said in a statement that a P-3C Orion maritime patrol aircraft will survey damage near Kaikoura — a South Island town near the epicenter of the largest quake, Sunday’s 7.5-magnitude temblor that killed two people and caused widespread damage.

“The USS Sampson ... is now on its way to Kaikoura, where it will deploy two MH60 helicopters to help as required. The U.S. has also offered a P-3 Orion for surveillance flights,” Defense Minister Gerry Brownlee said, according to the New Zealand Herald.

New Zealand air force helicopters were evacuating scores of people from the town, which remains cut off by landslides as hundreds of aftershocks rock the area. Kaikoura, home to about 2,000 inhabitants, is a popular destination for tourists on whale-watching expeditions or mountain excursions.

The Sampson, an Arleigh Burke-class destroyer, will be the first Navy ship to visit New Zealand in three decades.

U.S. warships haven’t been there since the mid-1980s, when Wellington refused a port call by the USS Buchanan on grounds that the U.S. would neither confirm nor deny that the ship was nuclear armed. New Zealand Prime Minister John Key last month approved the visit by the conventionally powered Sampson.

The Orion, assigned to Hawaii-based Patrol Squadron 47 and provided at the request of New Zealand’s Defense Ministry, is operating from Royal New Zealand Air Force Base Auckland, the Navy statement said.

“From the moment we got the word, our aircrew and maintenance professionals have thrown themselves into this relief effort with a commitment that is just so much a part of what our maritime patrol and reconnaissance force stands for,” Cmdr. Ryan Cech, of VP 47, said in the statement. “I am proud we can assist our New Zealand partners in their time of need.”

The U.S. and New Zealand navies have trained and operated together regularly in recent years, including at the recent Rim of the Pacific exercise and Pacific Partnership disaster response preparedness mission.