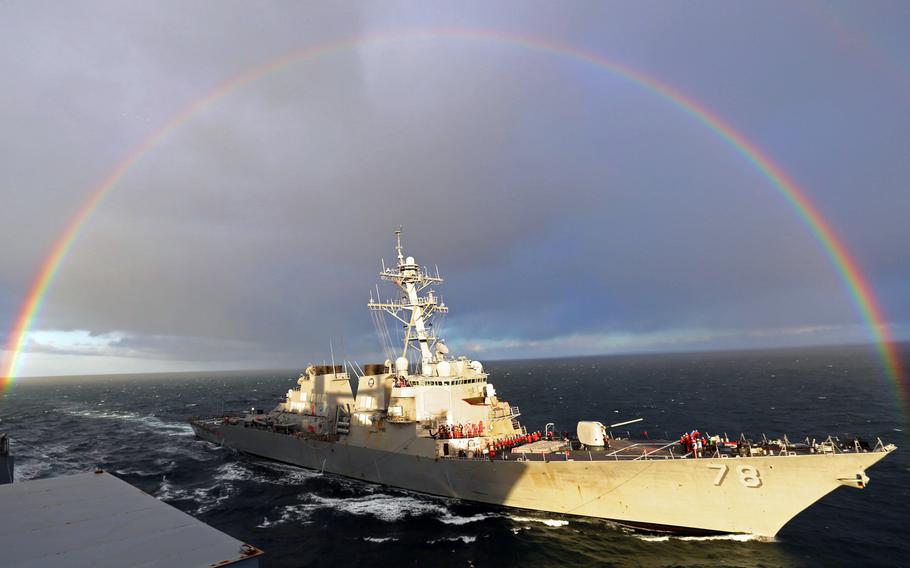 In this file photo from Wednesday, April 15, 2015, the guided-missile destroyer USS Porter pulls alongside the Military Sealift Command dry cargo and ammunition ship USNS Medgar Evers prior to a replenishment at sea. (Rohn D. Wallace/U.S.Navy)

NAPLES, Italy — The Navy will create a task force for ballistic missile defense at its European headquarters here in an effort to consolidate command of new anti-missile ships and shore sites.

Task Force 64 will have operational and tactical command of ballistic missile defense and integrated air and missile defense assets assigned to Navy forces in Europe and Africa, the Navy said in a directive posted online over the weekend. Those assets include BMD ships operating out of Spain and land-based missile interceptor sites still under construction in Romania and Poland.

The task force falls under U.S. 6th Fleet and will be led by a Navy captain with a planning staff. The move, announced by Chief of Naval Operations Jonathan Greenert and scheduled to be implemented in October, recognizes the growing number of resources devoted to BMD in the theater in recent years.

The U.S. is the primary contributor to the European missile defense shield, known as the European Phased Adaptive Approach. Four guided-missile destroyers equipped with Aegis radar and missile interceptors are being stationed at a Navy base in Rota, Spain, for regular patrols.

An Aegis Ashore interceptor site in Deveselu, Romania, is expected to be operational by the end of the year. Another, in Redzikowo, Poland, is planned for deployment in 2018. Both sites are being run by the Navy.

Other components under the U.S. contribution to the missile shield include a command structure at Ramstein Air Base in Germany and a radar facility in Turkey. NATO allies are making other contributions to the shield.

The scheme has caused a major rift with Russia, which says NATO missile defense plans are aimed against its own nuclear missile arsenal. The U.S. and its NATO allies insist the defense system is to meant to protect Europe from potentially hostile countries, such as Iran, but Moscow has countered that Iran doesn’t have any missiles capable of reaching Europe.

Greenert and other military officials have questioned the sustainability of the BMD mission in recent months, citing high demand for the ships in several theaters, including the Pacific, the high cost of converting destroyers and cruisers into BMD-capable platforms, and future funding uncertainty.