Navy to close struggling food court at Rota base 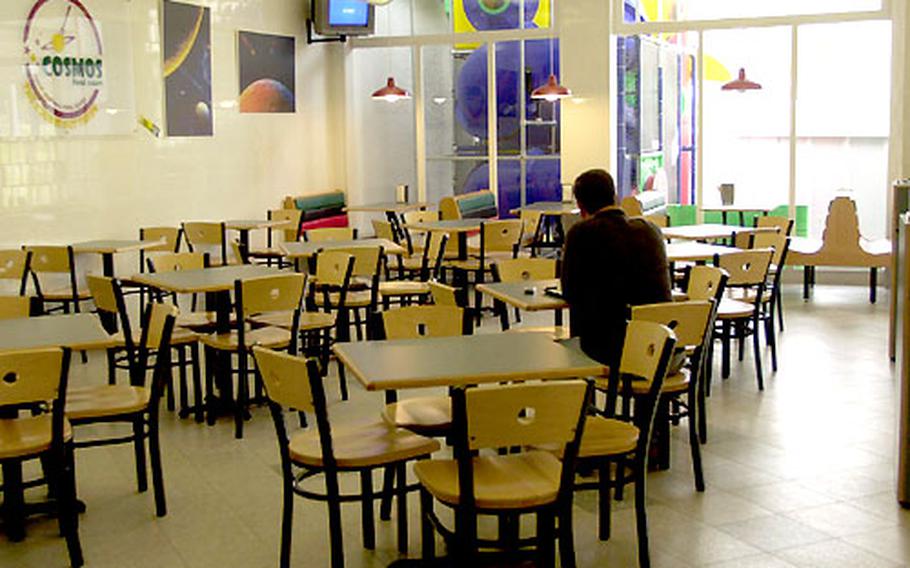 A customer has a late lunch at the Cosmos food court at Naval Station Rota, Spain, on Wednesday. The Navy is closing the Morale, Welfare and Recreation department&#39;s struggling food court six months after it opened for business. (Scott Schonauer / S&S)

The Navy is shutting down the establishment next month after a regional study of base services Europe-wide found the eatery would continue to lose thousands of dollars every month. The Navy has been taking a hard look at which base services to keep as commands attempt to become more efficient and the Navy looks to free up more money to modernize the fleet.

&#8220;[The food court] is not making any money and we don&#8217;t think it ever will make any money, so instead of continuing to run a losing operation they decided that it&#8217;s best to stop the loss by closing the restaurant,&#8221; said Tom Moriarty, a manager with Rota&#8217;s Morale, Welfare and Recreation department, which operated the food court.

The eatery, which serves burgers, Asian and Mexican fare, will close around the end of May. Asian Creations and Eddie Pepper&#8217;s Mexican food will close down permanently but Mean Gene&#8217;s Burgers will move to another location.

The restaurant has been a financial loser since it first opened its doors.

Cosmos lost $250,000 through March and was expected to lose $450,000 by the end of this fiscal year, said Lt. Cmdr. Carla McCarthy, spokeswoman for Navy Region Europe command.

When a Navy committee looked at cutting expenses and other ways to keep the food court opened, they figured it would still lose between $8,000 and $18,000 a month. Keeping the food court open would only take money away from other MWR programs on base, McCarthy said.

Chip Kreisman, the MWR hospitality director, said a series of unforeseen factors took a bite out of the restaurant&#8217;s bottom line. A weak dollar, rising costs, a reduction in the base population and the opening of a Taco Bell and KFC on base made it difficult for Cosmos to break even, much less make a profit. The Taco Bell and KFC, which is operated by the Navy Exchange Command, opened last March to long lines of customers clamoring for burritos and crispy chicken.

The upcoming closure is disappointing to regular customers.

Other operations at the Reflections Club, which houses the food court, also will close. The British Pub and a gaming room with slot machines will be closed for normal business hours but both could open for special occasions.

The rest of the building will be used as a conference center. A contracted gift shop will remain open.

The $400,000 project to build the food court in the wing of Reflections has had more than its fair share of problems since its inception.

Plans to renovate and convert a portion of the Reflections Club began five years ago. At the time, base residents said that having more name-brand fast-food restaurants was what they wanted and studies showed that a food court would be successful financially. However, construction setbacks delayed the opening and the dollar fell, putting Cosmos in the situation it is in right now.

Mean Gene&#8217;s Burgers will open in the base housing area next to the community pool. It is scheduled to open May 29.

The department will find jobs for the food court&#8217;s 18 Spanish and American permanent employees. The 15 temporary employees will lose their jobs.