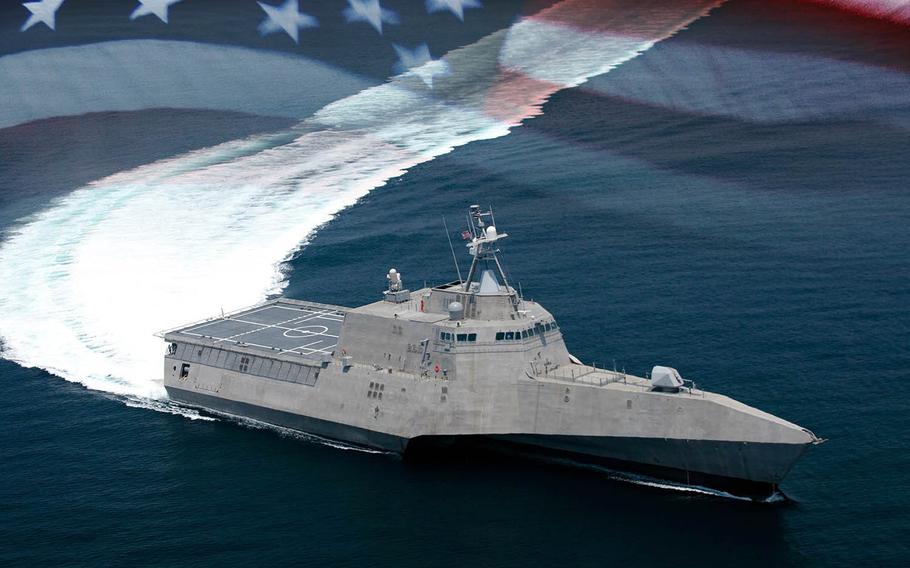 A Navy illustration of the littoral combat ship USS Kansas City. (Courtesy of the U.S. Navy)

Tracy Davidson will break a bottle of wine on the bow of the USS Kansas City during the ceremony, which is scheduled to start at 10 a.m. local time, a Navy statement said. Rep. Emanuel Cleaver II, D-Mo., will serve as principal speaker.

Built by Austal USA, the Independence-class Kansas City is 418 feet long and capable of operating in excess of 40 knots, according to the Navy. It will have a core crew of 40 sailors and carry a pair of MH-60R Seahawk helicopters and an MQ-8 Fire Scout drone.

The ship will stand as a symbol of the strong bond between the Navy and Marine Corps team and the people of Missouri, Secretary of the Navy Richard Spencer said in the statement.

“The ship is a testament to our commitment to provide maritime dominance and power projection required by the nation, and to our partnership with industry to build the Navy the nation needs,” he said.

The modular, reconfigurable LCSs are built to provide joint forces the ability to access critical areas through “surface warfare, anti-submarine warfare and mine countermeasures missions in littoral regions,” the Navy statement said.

It’s the second ship to be named after Missouri’s largest city. The first USS Kansas City was a Wichita-class replenishment ship commissioned in 1970. Throughout its 24-year lifespan, it accrued numerous unit awards from service in Vietnam and Operation Desert Storm before being retired in 1994, the Navy said.