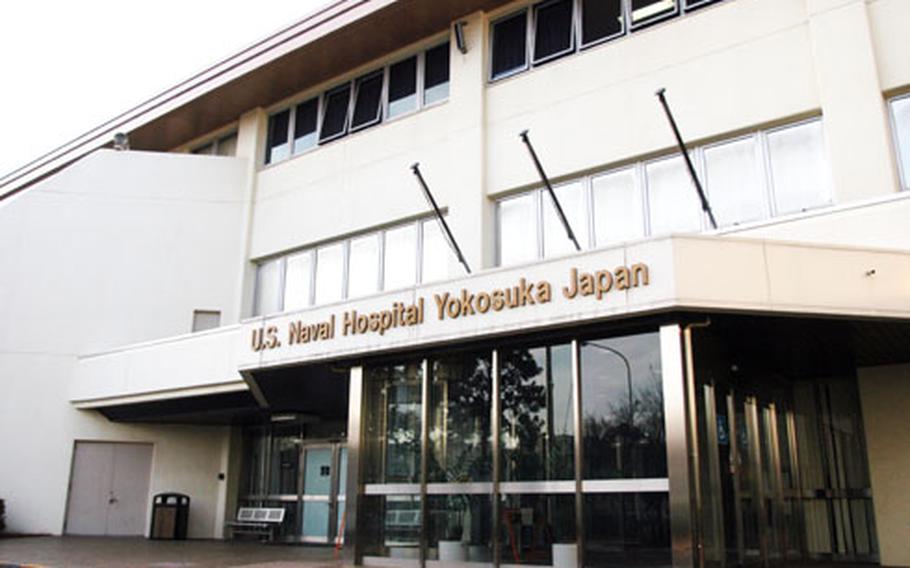 Yokosuka Naval Hospital recently implemented a smoking ban for all hospital staff when in uniform. The ban is designed to promote a positive image and provide a healthy environment for its patients. (David J. Carter/Stars and Stripes)

YOKOSUKA NAVAL BASE, Japan &#8212; Most U.S. Navy medical personnel in the Pacific &#8212; military and civilian &#8212; will be banned from smoking or chewing tobacco anywhere during duty hours and while in uniform, in accordance with a recent Navy instruction.

Capt. Kevin Moore, commander of U.S. naval health care facilities in Japan, South Korea and Diego Garcia, said during a phone interview Friday that he and his staff are taking the instruction seriously and have begun enforcement.

According to the Navy instruction, the Chief, Bureau of Medicine and Surgery shall "prohibit military personnel from using tobacco products while in the presence of patients or while in uniform when representing Navy Medicine."

Moore said specific guidance regarding enforcement with the civilians is still being sought.

"We as health care providers have to be held accountable to being good role models," he said.

"We&#8217;re in the process of educating people about the no-smoking policy," Moore said. "We have the chiefs patrolling the areas reminding our folks about the instruction."

The Navy medical community on Okinawa, which falls under a separate command, is also following the general guideline.

Kiyomi Williams, spokeswoman for the U.S. Naval Hospital on Okinawa, said medical staff have been prohibited from smoking during their workday since January. But the policy is enforced only on the hospital grounds and is based on the honor system, she said.

When asked how the ban might affect staff performance given the possible unpleasant withdrawal symptoms associated with quitting smoking, Moore said he&#8217;s not expecting any issues.

"Some of the inpatient wards that I&#8217;ve worked at in the past have gone smoke-free, and surprisingly, there was very little impact," he said. "We are going to be concerned, though, because it is a very difficult substance to give up, and I don&#8217;t want to minimize it and just say just quit."

The Yokosuka hospital also plans to start tobacco cessation classes for staff in the future. Patients now are being referred to their primary care managers.

The smoking ban has one key beneficiary in mind &#8212; the patient.

"I think it&#8217;s a great idea," said Maria Diaz, a Navy spouse in Yokosuka. "I don&#8217;t like smelling cigarettes, and especially not in the hospital. It doesn&#8217;t give you the impression that they&#8217;re creating a healthy environment."

But Chantal Sheehan, a Navy employee from Atsugi who works at Camp Zama&#8217;s orthodontics department, said she doesn&#8217;t agree with the Navy&#8217;s position. Sheehan, a smoker, says it&#8217;s indicative of a broadening anti-smoking bias on the part of the military.

Sheehan pointed to base stores raising the prices of tobacco products as an example of that trend.

Moore said the hospital plans to release its final official tobacco policy on May 31 during World No Tobacco Day.

U.S. Navy officials on Guam, queried early in the week, were unable to comment on their smoking policies by deadline Friday.

Stars and Stripes reporters Natasha Lee and Tim Wightman contributed to this story.

Tell UsWhat do you think of the increased restrictions on tobacco use by medical personnel in uniform or during work hours? Send us your thoughts at: respond@stripes.osd.mil

Smoking guidelines around the PacificJapan

Misawa Air Base: Officials banned all smoking on the 35th Medical Group campus, including inside cars, beginning Feb. 15. The policy applies to staff, patients and visitors.

Camp Zama: Medical personnel are allowed to smoke during their breaks in designated smoking areas.

Kunsan and Osan air bases: While smoking is discouraged, Air Force medical personnel are allowed to smoke during their breaks in designated smoking areas.

65th Medical Brigade: Information on smoking policies for the brigade, which administers health care for the Army in South Korea, was unavailable by deadline Friday.

Kadena Air Base: The Air Force&#8217;s tobacco use policy, AFI 40-102, is under revision, but the 18th Medical Group at Kadena adheres to the most recent version which allows smoking in designated smoking areas around the facility.