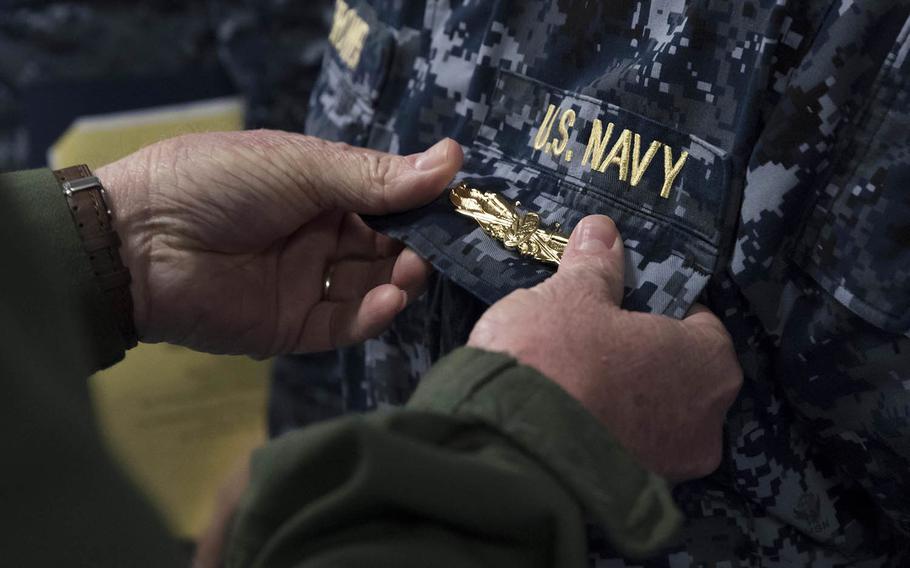 The Navy is clamping down on who can become a surface warfare officer — a move aimed at boosting focus on bridge watch-standing opportunities for future warship commanders.

Effective immediately, sailors pursuing SWO certification must be commissioned line officers qualified to command warfighting units or be making a lateral transfer into the field, according to a Navy instruction issued July 23.

The change — which restricts limited-duty officers, chief warrant officers and senior enlisted sailors from becoming SWOs — comes after ineffective watch-standing was found to be partly to blame for separate collisions last year that killed 17 sailors on the destroyers USS Fitzgerald and USS John S. McCain.

It also “aligns with new career path revisions, which focuses on increased experience on ships, including increased bridge watch-standing opportunities for SWOs,” said a Navy statement about the new instruction.

“What we are really going after is increasing at-sea experience in ships. Part of increasing that experience is getting the reps and sets in the pilothouse driving ships,” he told USNI. “If you have other designators … competing for time in the pilothouse to earn their OOD letter — which is the prerequisite for SWO qualifications — then that really goes against what I’m trying to do in the surface force.”

Those who do not meet the new qualification but were already pursuing SWO certification will be allowed to continue doing so until Oct. 1, the Navy statement said.

The service’s instruction also says that only those permanently assigned to a vessel may receive SWO designation from that ship’s commander.

“Once SWO qualification is achieved, transfer from one ship to another will not require requalification as a SWO or revalidation of the entire SWO [Personnel Qualification Standards] package,” the statement said. “However, requalification in all applicable watchstations is required.”

Many sailors standing watch during the McCain’s fatal Aug. 21 collision near Singapore were on temporary duty from guided-missile cruisers, which have different controls than destroyers. This was found to be a contributing factor in the collision, according to the Navy’s report on the incident.

Also included in the changes to SWO certification is the elimination of a time limit to attain SWO pins. However, “open communication with [Navy Personnel Command] is required if a qualification is expected to take longer than the first division officer tour,” the statement said.

The service said the changes were made to “develop the most experienced and capable commanding officers who are specialists in five areas: seamanship, navigation and shiphandling; combat systems; engineering; command and program management and administration; and leadership.”