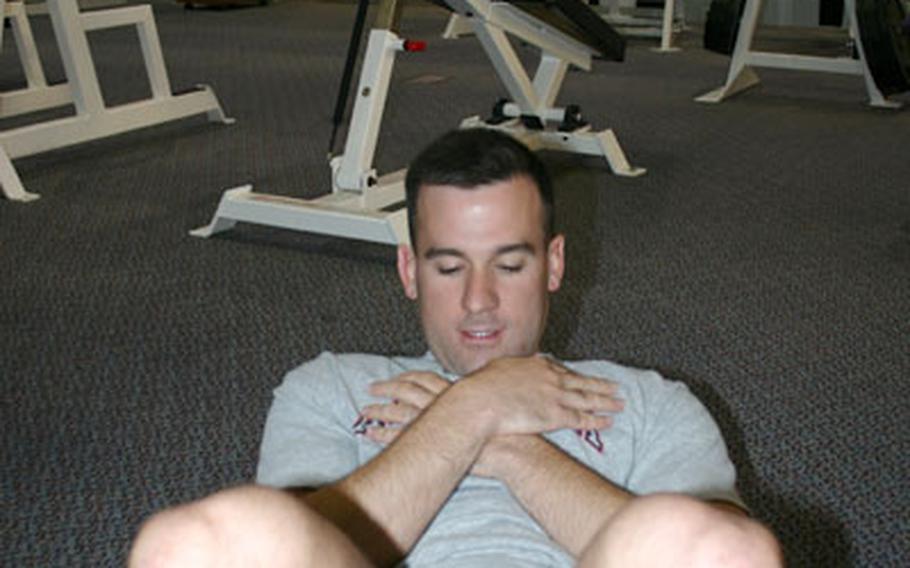 Lt. Cmdr. Darren Fouts, 32, works out for an hour every day to keep in shape. He said members of the U.S. military should be held to a higher standard of physical fitness than those who aren’t in the military. (Sandra Jontz / S&S)

NAPLES, Italy &#8212; When the chief of the U.S. Naval Reserve passed through Naples last month, he was struck and disappointed by the number of &#8220;fatties&#8221; in uniform, he had said.

The issue of unfit sailors is not unique at U.S. Navy Support Activity Naples, Vice Adm. John Cotton said. Navywide, it seems a number of flabby sailors are living the punch line of the joke &#8220;what tire are you wearing?&#8221; (Answer: It&#8217;s a Dunlop, for their guts have done-lopped over their belts.)

The Navy&#8217;s upper echelons are concerned too, and after nearly a year of planning, are modifying the Physical Fitness Assessment criteria in a push to &#8220;change the culture&#8221; toward a healthier force, officials said.

A key and immediate change is that commanders now can halt promotions if sailors fail their Physical Readiness Test just once.

And the Navy is being more vocal in reminding sailors that they can, and will, be kicked out of the service if they fail three of the semiannual tests in four years, said Cmdr. Ron Hill, a spokesman for the Navy&#8217;s Bureau of Personnel.

The push comes not a moment too soon, said Petty Officer 3rd Class Devin Porter, a Seabee stationed at Naples who has seen too many fellow fleet sailors gain weight.

&#8220;When the general public looks at the military and they see overweight or unkempt sailors or soldiers, that sheds a certain light on the military that is embarrassing,&#8221; said the 22-year-old electrician who works out just about every day &#8212; three times a week as part of his command&#8217;s mandatory physical training hours, and on his own, usually playing basketball with buddies.

He has seen the battle of the bulge among sailors primarily assigned to desk jobs and those on ships.

Fleet sailors afloat often work a 12- to 14-hour day, and afterward do not feel much like hitting a gym for an hour, said Lt. Cmdr. Darren Fouts, an information analyst at Naples.

Under the new directive that will be released soon, officials said, commanders will face black marks on their own records if sailors under their command don&#8217;t shape up &#8212; a move that sits well enough with Fouts, he said.

He makes time to work out daily, and expects his sailors to do the same &#8212; especially since he is following new directives to give sailors time during the workday to hit the track, gym, pool or whatever their flavor.

Three days a week, for 30 minutes each of those days, sailors must have a chance to physically train.

Leaders will have some leeway, especially if sailors in mandated remedial programs show improvements in their PRTs, or lose weight as part of the body-composition measurement portions. And unlike before, sailors who fail a PRT will be able to re-test during the same cycle, officials said.