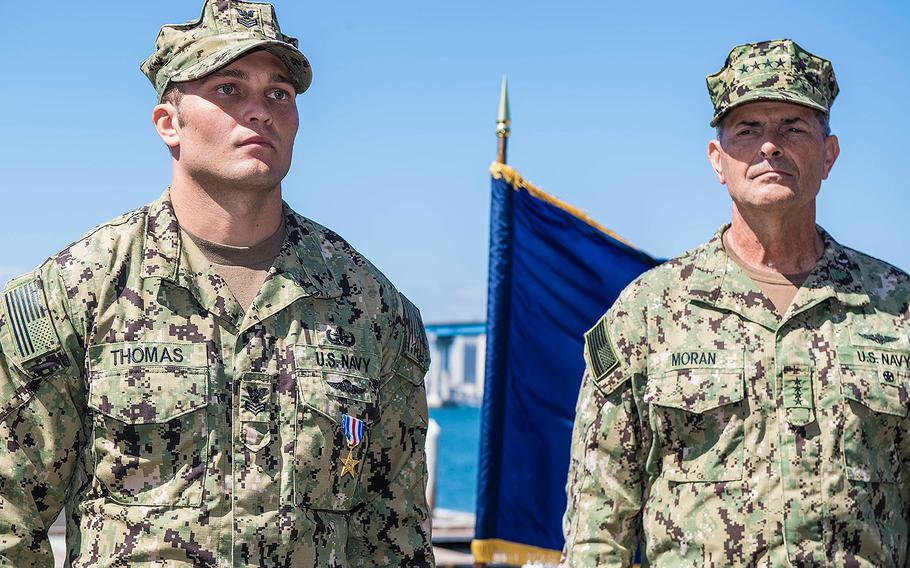 WASHINGTON – A Navy explosive ordnance disposal technician received the Silver Star this week for his actions during a deadly 10-hour firefight with Islamic State militants that helped his fellow sailors navigate a minefield, the Navy announced Friday.

Petty Officer 1st Class Jeffrey Thomas exited his vehicle in the midst of the fight on Oct. 20, 2016 as bullets, rockets and mortar rounds targeted his unit. Thomas swept the area for explosives just after a roadside bomb struck another vehicle, mortally wounding a sailor, according to the Navy. His actions allowed medics to get through the minefield and reach injured sailors to provide critical care.

“No one who was present on the 20th of October knew better than Jeff the dangers he was facing,” said Navy Cmdr. Geoff Townsend, the commander of Thomas’ unit, Explosive Ordnance Disposal Mobile Unit 3. “After the EOD supervisor, a friend and mentor, was mortally wounded, Jeff knowingly exposed himself to hazards in order to protect the lives of his teammates and brothers in arms, and secure a [medical evacuation] for his wounded teammate. His actions that day saved the lives of his teammates and exceeded all measures of selflessness and devotion to his country.”

Navy Adm. Bill Moran, the vice chief of naval operations, awarded Thomas the nation’s third highest honor for valor on Wednesday during a ceremony at Naval Amphibious Base Coronado in California.

The Navy’s statement did not include details about the location of the firefight or identify the sailor who died as a result of the wounds that he received from the roadside bomb attack. However, the Pentagon previously announced Navy Chief Petty Officer Jason Finan, 34, was killed in action in an improvised bomb attack on his vehicle on Oct. 20 just north of Mosul, Iraq.

Finan was an EOD technician assigned to the same unit as Thomas. The sailors were attached to a SEAL team charged with advising and assisting Iraqi security forces fighting ISIS on the march toward eventually liberating Mosul.

Two other sailors with the Explosive Ordnance Disposal Mobile Unit 3 also were honored during the Wednesday ceremony.

Navy Lt. Morgan Dahl received the Bronze Star with “V” device for valor for safely guiding a tactical advance of a convoy through a firefight. Navy Senior Chief Petty Officer Jon Hamm was awarded the Navy and Marine Corps Commendation Medal with combat “C” device for clearing a route through ISIS territory under fire that helped his teammates suppress the threat, the Navy said.