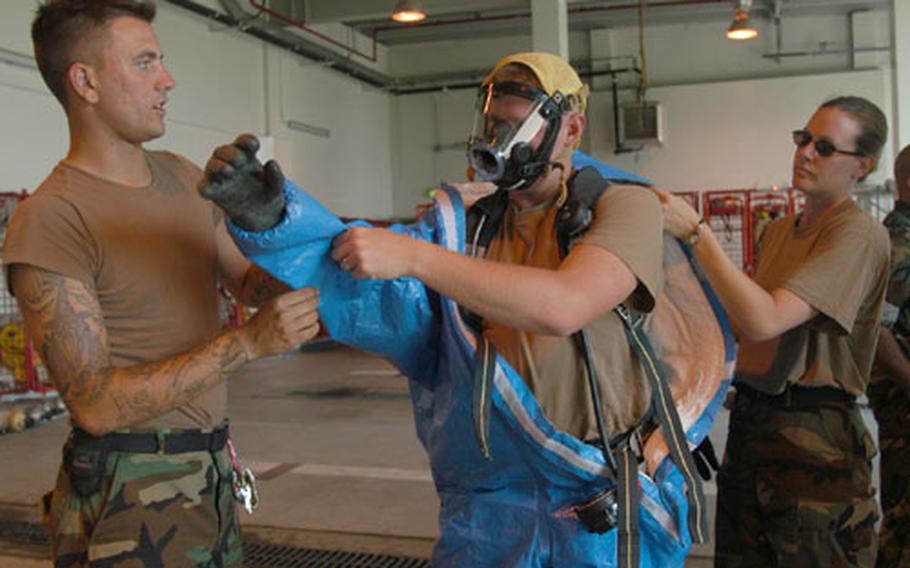 SIGONELLA, Sicily &#8212; Three Navy bases in Europe are among 10 worldwide now better equipped to respond to an event involving weapons of mass destruction.

Emergency response teams at bases including Sigonella, Sicily; Naples, Italy; and Souda Bay, Crete, received an average of $250,000 in new equipment. Terrorist attacks &#8212; such as the ones on the guided missile destroyer USS Cole in Yemen in 2000 and the Sept. 11, 2001, events &#8212; prompted Congress to allocate $9 million in emergency funds for the Navy Chemical-Biological Enhanced Force Protection Base First Responder Program.

During three-week-long training, the teams learn how to deal with a chemical, biological, radiological or nuclear event.

On a recent sweltering afternoon at the Sigonella Fire and Emergency Services Department, the team tried on Level A chemical-resistant suits, designed to protect someone entering a contaminated zone.

&#8220;I feel like a Teletubbie,&#8221; chuckled Seaman Craig Ries, 23, referring to the children&#8217;s TV character after donning the bulky blue spacesuitlike garb.

With restricted mobility and the suits muffling their voices, the sailors tried to maintain a sense of humor while testing chemical detection kits. In teams of two, the sailors had to shout to understand each other. One yelled the instructions while the other ripped open the miniature chemistry set to detect nerve, blister and blood agents.

Team members also used hand-held monitors to detect chemical agents and gases, and put up 10-by-12 decontamination tents to shower off chemical exposure victims. The new equipment includes flash heaters to warm the water and drums to store the contaminated runoff, said Brian Ponder, a trainer for Battelle, the company contracted to do the training.

The Naval Surface Warfare Center in Dahlgren, Va., started the first-responder program in June 2002, said Susan Reel, deputy program manager. The Soldier Biological Chemical Command assessed Navy bases&#8217; abilities to respond to a weapons-of-mass-destruction scenario, and noted what equipment the bases needed. The training costs an average of $400,000 a base, Reel said.

Each base is responsible for forming its own first-responder team.

&#8220;The purpose of putting this team together is to try to be more self-sufficient,&#8221; said Walt Heller, assistant fire chief for Sigonella&#8217;s Fire and Emergency Services Department.

He said the team will include about 25 supplemental members from disaster preparedness, public works and supply.

One of the members is Petty Officer 2nd Class Nick Lacy, 25.