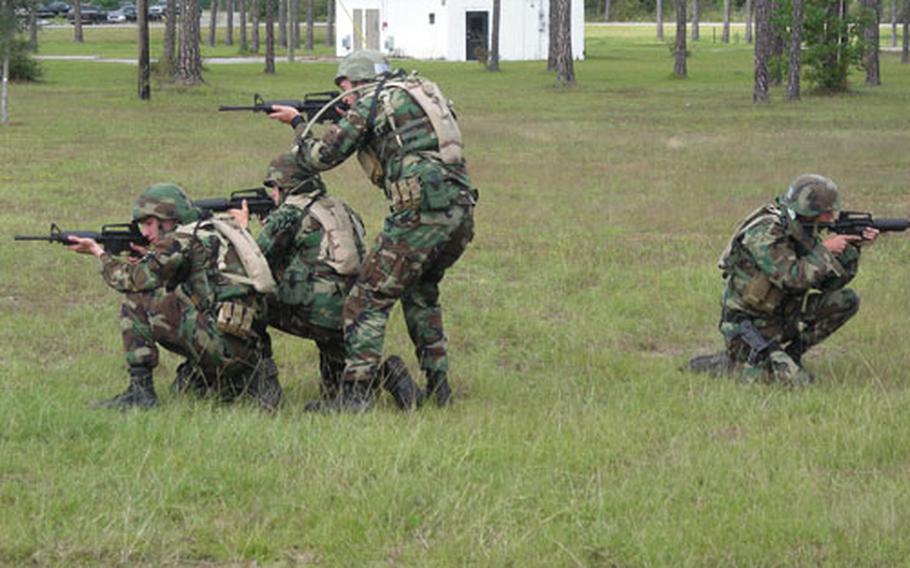 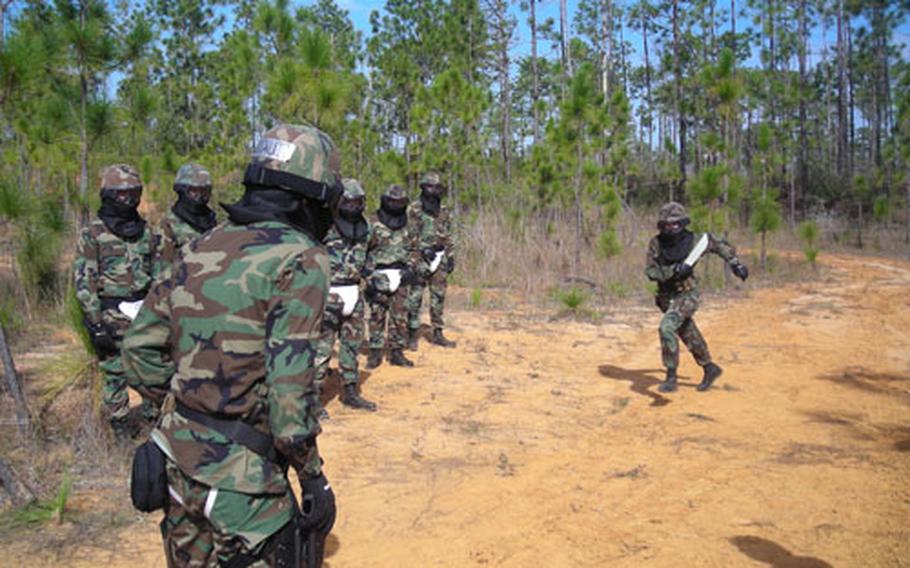 An Expeditionary Combat Skills student, under the direction of Small Arms Marksmanship Instructor, receives her initial training with the M-4 rifle. (Courtesy of U.S. Navy)

The command was established in January 2006 to encompass sailors who fight in shallow waters and ashore, including Seabees, riverine sailors and Explosive Ordnance Disposal technicians.

Shortly after the command was founded, it became apparent that sailors were joining NECC without any training in individual combat skills, said Capt. Mark Kohart.

&#8220;This was problematic to say the least,&#8221; said Kohart, commanding officer of the Navy&#8217;s Center for Security Forces, which falls under Navy Personnel Development Command.

Now the Navy is establishing the Expeditionary Combat Skills course in Gulfport, Miss., to give sailors coming to NECC a baseline for basic combat skills, said Kohart, who is responsible for the school&#8217;s curriculum.

Kohart said the course is for sailors coming to NECC from the fleet or out of &#8220;A&#8221; School, where they learn their rating. Sailors will then go on to further training if needed.

A pilot program is being conducted and the school is expected to be fully up and running by March, Kohart said. The course will be tweaked after the pilot program concludes on Nov. 16.

Until now, Seabees and EOD technicians have had their own combat skills courses, while riverine sailors have been trained by the Marines and other sailors have received combat skills from contractors, said Capt. Robert McKenna, training officer for NECC.

Asked if the lack of standardized training for NECC sailors has hurt the command, McKenna said: &#8220;Depends on how you define hurt. It has caused us not to achieve our full effectiveness because the training is not standardized across the force.&#8221;

The ECS course will mean that NECC sailors can focus on higher training once they get to their final assignment, he said.

At the school, sailors will learn how to fire individual and crew-served weapons, administer combat first aid and other skills including land navigation and small unit tactics, Kohart said.

The course is separate from a training program for individual augmentees, Navy officials said.

Individual augmentees deploy as individuals or ad hoc units to supplement other services, such as the Army. They undergo 17 days of training at Fort Jackson, S.C.

Much of individual augmentees&#8217; training is learning how to acclimate to other services&#8217; cultures, while the course at Gulfport is meant to turn out expeditionary sailors, officials said.

One reason NECC needed to establish the course is that Navy training has gradually put less emphasis on individual skills and more focus on teaching sailors how to operate machinery, he said.