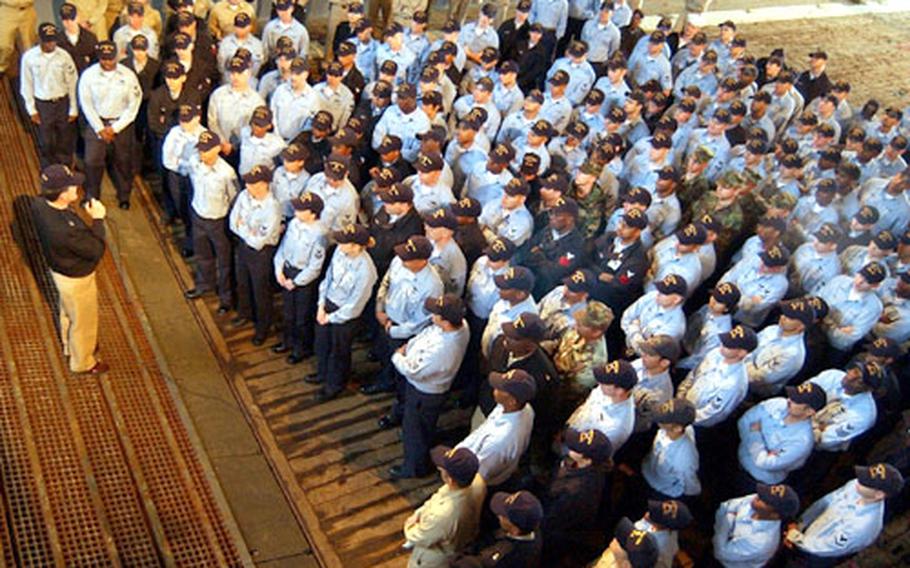 During a recent visit to Sasebo Naval Base, Master Chief Petty Officer of the Navy Terry Scott, left, speaks to sailors onboard the USS Harpers Ferry. Scott is heading a task force on uniforms. (Jonathan R. Kulp / U.S. Navy)

SASEBO NAVAL BASE, Japan &#8212; When it comes to Navy uniforms, things can get a little complicated, and even expensive.

The Navy&#8217;s top officer wants to change that.

Adm. Vern Clark, chief of Naval Operations, decided to dig through sailors&#8217; sea bags to see what stays &#8212; and what needs to go. He&#8217;s deemed the mission Task Force Uniform.

&#8220;Task Force Uniform was initiated by the sailors, who&#8217;ve had a lot of questions about different uniform policies,&#8221; said Master Chief Petty Officer of the Navy Terry Scott during a recent visit to Sasebo Naval Base. &#8220;It got to the point where the CNO said &#8216;We need to take a look and start from scratch,&#8217; looking at the entire uniform sea bag, as well as all the uniform regulations.&#8221;

Clark put Scott, the Navy&#8217;s top enlisted sailor, at the helm of the initiative to study and react to sailors&#8217; concerns about uniforms.

The task force first met in mid-March in Washington, according to a Navy press release. The group discussed options for a more professional, sensible, cost-effective set of uniforms.

&#8220;Sailors need uniforms that provide versatility, durability and even interchangeability,&#8221; Scott said. &#8220;We need to make sure we address those concerns.&#8221;

The committee includes members from various Navy elements &#8212; surface forces, air forces, submariners, Seabees and others. Both enlisted sailors and officers are among task force members to &#8220;cast as wide a net as possible,&#8221; Scott said. They&#8217;re to report to Clark in October.

Among issues emerging from the task force&#8217;s first meeting:

Developing a working uniform for sea or ashore, across all communities.Establishing a year-round service uniform for pay grades E-1 through E-6.Making the Navy&#8217;s uniform regulations easier to understand.Designing or redesigning uniforms to take into account various body shapes and sizes.&#8220;We want to keep what makes sense and get rid of that that doesn&#8217;t,&#8221; Scott said.

Scott said the task force also hopes to cut back on the sheer number of uniform elements and variations sailors now are required to maintain.

Although several practical changes are likely, he said, sailors won&#8217;t see drastic changes anytime soon. &#8220;But with the CNO expecting a report in October, we&#8217;re going to be moving pretty quickly,&#8221; he said.