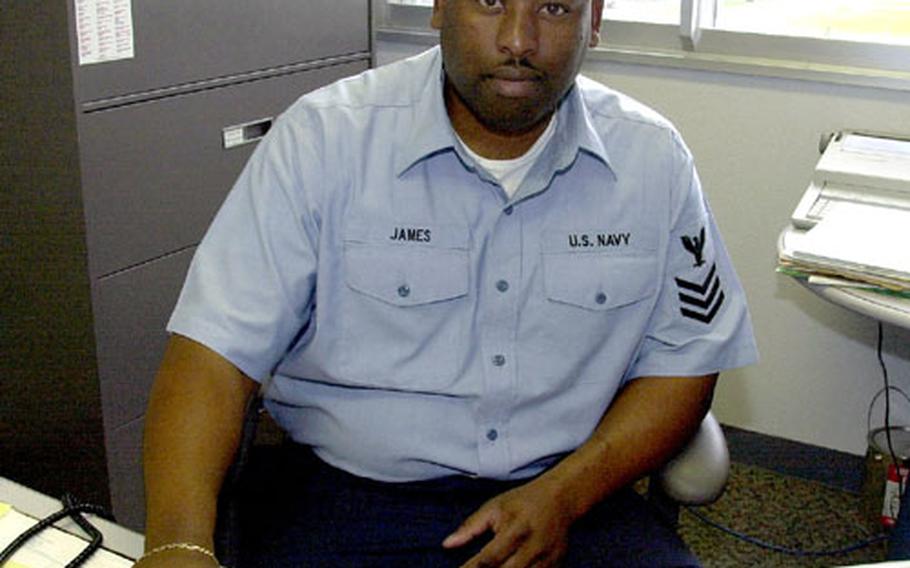 Petty Officer 1st Class Robert James, command career counselor for Naval Air Facility Misawa, says the Navy’s Career Management Symposium in Japan and South Korea this week and next week is an opportunity for sailors to learn about some significant policy changes that could affect their Navy careers. (Jennifer H. Svan / S&S)

MISAWA AIR BASE, Japan &#8212; Sailors in Japan and South Korea are getting the chance starting now to ask questions and learn more about some significant policy changes in store for them.

The symposium will provide information aimed at helping servicemembers and their families make decisions about their future, organizers say. They&#8217;ll see a comparison between current Navy and private-sector benefits, compensation and quality-of-life opportunities.

&#182; A new evaluation system: An online performance appraisal will replace the standard written fitness report. Sailors no longer will be graded against their peers, James said. The old system was based on percentages; only so many petty officers 1st class in a group, for example, could receive an &#8220;early promote,&#8221; even if all were deserving. The new performance appraisal goes into effect Navy-wide in May 2005. Sailors will receive a grade of high, medium or low for categories such as cooperation, work ethic, communication skills and mentoring, depending on whether they&#8217;re a supervisor or non-supervisor. James said some believe this new method will take the Navy back to the old point system, in which sailors had to receive 4.0s to keep advancing. &#8220;If you&#8217;re not pulling a high, then you&#8217;re not going to advance,&#8221; he said. &#8220;Every command wants their sailors to advance.&#8221;

&#182; Perform to Serve: &#8220;For the first time in history,&#8221; James said, &#8220;the Navy is going to send people home.&#8221; The program, which began in March to relieve overcrowding in some career fields, applies to first-term sailors approaching re-enlistment. During the first half of their first term&#8217;s final year, sailors in overmanned jobs get six tries to find a different job in an uncrowded field. If they don&#8217;t, they must leave. &#8220;Everybody is not going to be able to convert or go to a new rating,&#8221; James said. A board of Navy commanders and master chiefs in Washington, D.C., will decide who stays based on criteria including performance evaluations and supervisors&#8217; comments. About 118 sailors now in Japan likely will be forced to separate soon, James said, adding that young sailors who get in trouble now may find staying in the Navy difficult. &#8220;If they slip on a banana peel during their first 4 years, you can almost bet that they won&#8217;t make the cut,&#8221; he said.

&#182; Sea Warrior: This new system is being developed to help sailors select future duty assignments. Sailors will bid online for their next billet based on their qualifications and evaluation scores, James said. Under the current Job Advertising and Selection System, for their next assignment sailors may choose up to five locations where there jobs are available &#8212; and be guaranteed one of those, James said. Under Sea Warrior, &#8220;they may not be able to choose location,&#8221; he said. No start date for the program has been set.

Those wishing a schedule of Navy career symposiums in Japan and South Korea should check with their Navy command counselors. More information is available at www.staynavy.navy.mil.