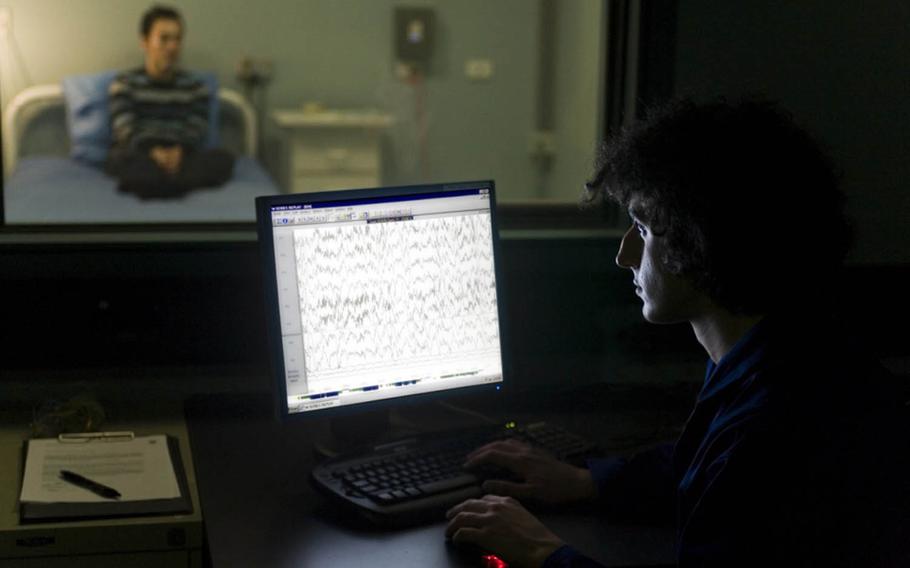 The Navy is funding research into how sleep deprivation affects decision-making in a group setting, such as among a ship's bridge crew. (Courtesy of Monash Institute of Cognitive and Clinical Neurosciences)

The Navy is funding research into how sleep deprivation affects decision-making in a group setting, such as among a ship’s bridge crew.

The Office of Naval Research Global is sponsoring ground-breaking research by Professor Sean Drummond with the Monash Institute of Cognitive and Clinical Neurosciences in Australia.

Little research exists on how and to what extent lack of sleep affects a group while its members are collectively analyzing data and making decisions, the Navy said Thursday in a statement. The effects of sleep deprivation on individual performance have been extensively documented.

“From high op-tempo Navy special warfare missions, to Sailors on extended watch on ships, to long-duration flights or Marines in theater, the issue of sleep loss is critical to the performance and well-being of our warfighters,” Capt. Kevin Quarderer, ONR Global commander, said in the statement. “Professor Drummond’s research will play a key role in understanding and enhancing their endurance and combat effectiveness.”

The Navy has more deeply scrutinized the ill effects of sleep deprivation in the wake of two separate deadly collisions by the guided-missile destroyers USS Fitzgerald and USS John S. McCain last summer, in which 17 sailors died.

A Navy comprehensive review issued in October assigned some of the blame for the collisions on crew fatigue due to poor sleep patterns.

Participants in Drummond’s study will be monitored during waking hours by wearing eye-tracking devices that measure attention as they perform tasks, such as focusing their gaze on moving images on a computer screen while at the same time ignoring distractions, the Navy said.

Participants will also wear EEG, or electroencephalogram, headsets that measure brain activity from the cerebral cortex, the control center of memory, attention and perception, the Navy said.

“Professor Drummond’s team is taking a systematic approach to studying fatigue and circadian rhythm disruption, and how it impacts decision-making in complex tasks,” Dr. Jason Wong, ONR Global’s science director, said in the statement. “This research will provide insight that can be applied by our Sailors and Marines, who often have to work long hours in less-than-optimal sleep environments, and we expect it will improve their cognitive and physical health.”

The participants will be roused without proper sleep toward the end of the study regimen and then perform group exercises, during which their decision-making ability and processes are monitored. They are tasked with reaching consensus after reviewing various discrete bits of information and then outlining the reasoning process supporting their decisions.

“Such experiments will allow us to compare decision-making abilities after a well-rested state and after sleep disruption and circadian misalignment,” Drummond said in the Navy statement. “This is important because, during military engagements, you must make fast decisions — deploying resources, reacting to the enemy — at all hours of the day, while processing information from many sources.”

Drummond worked as a staff psychologist at the VA San Diego Healthcare System from 2005-14 and has been at the Monash School of Psychological Sciences as a professor of clinical neuroscience since December 2014, according to his faculty bio.

His clinical research has focused on the treatment of insomnia, and other areas of research have examined the interaction of sleep, sleep disruption and psychiatric symptoms.