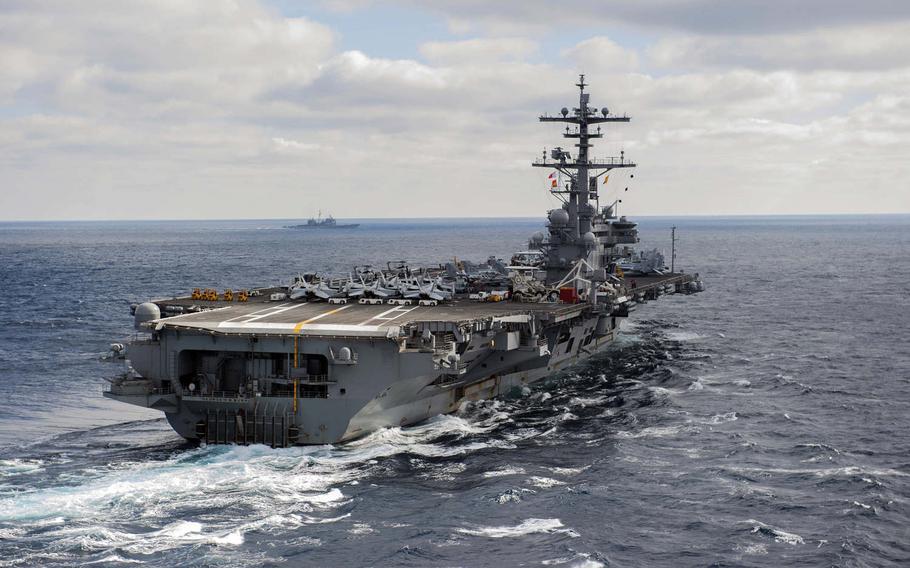 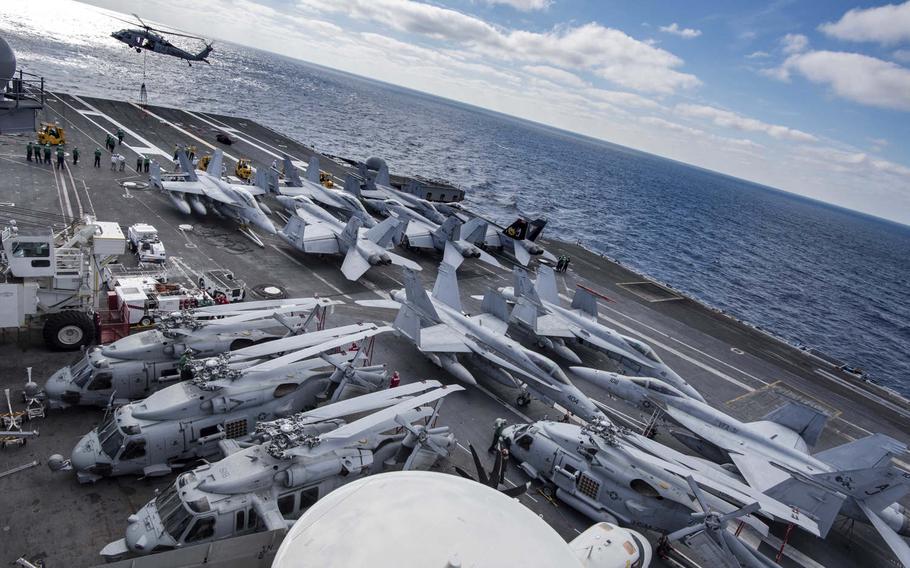 Aircraft are staged on the flight deck of the aircraft carrier USS George H.W. Bush, Dec. 8, 2016. The George H.W. Bush Carrier Strike Group deployed on Saturday, Jan. 21, 2017, to the 5th Fleet and 6th Fleet area of operations to support the campaign against the Islamic State group. (Spencer Fling/U.S. Navy) 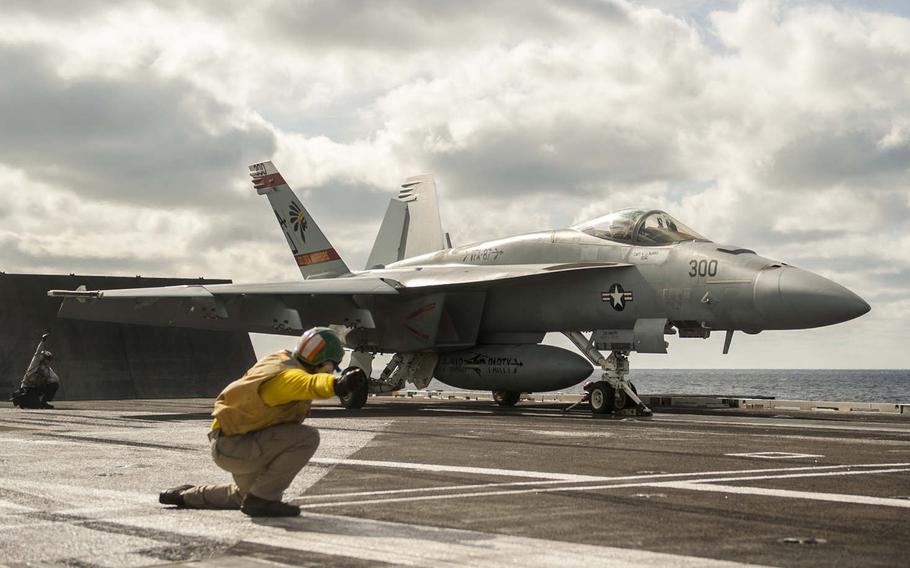 An F/A-18E Super Hornet attached to the "Golden Warriors" of Strike Fighter Squadron 87 prepares to launch from the flight deck of the aircraft carrier USS George H.W. Bush, Dec. 3, 2016. Bush deployed on Saturday, Jan. 21, 2017, to the 5th and 6th fleet areas of operations to support the air campaign against the Islamic State group. (Christopher Gaines/U.S. Navy) 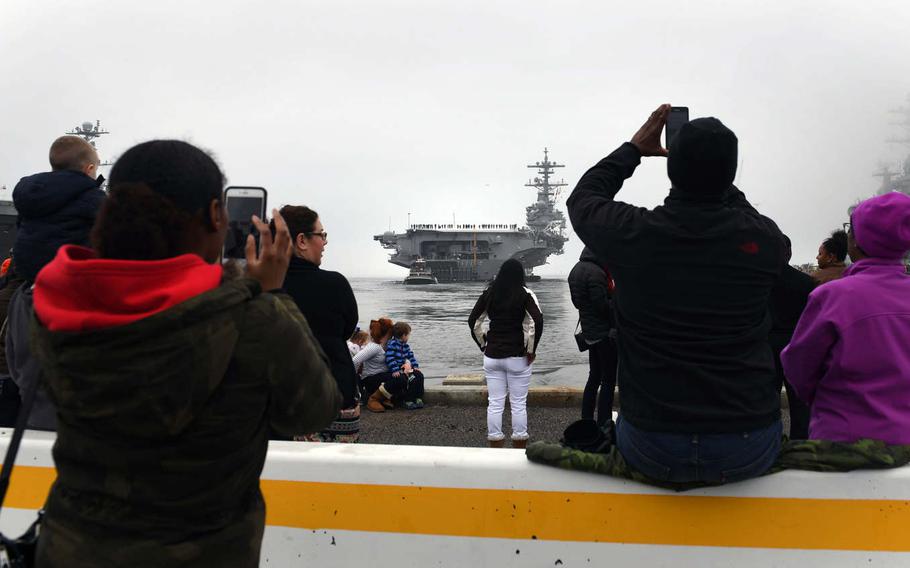 USS George H.W. Bush strike group sailors and their families finally said goodbye on Saturday after an extended maintenance period caused a monthlong postponement of its deployment to the Mediterranean and Middle East.

The Norfolk-based carrier’s delay highlights the Navy’s continuing struggle to maintain readiness more than two years since the introduction of the Optimized Fleet Response Plan, which is meant to get the fleet back on track after years of high demand.

Since introducing OFRP in 2014, the Navy has been working to integrate its carrier force into the plan that realigns the fleet’s maintenance, training and deployment cycles into 36-month rotations.

The Bush will be the second carrier strike group to deploy under the model. USS Dwight D. Eisenhower and its strike group were the first, completing a deployment in December. It also was the first carrier to hit the deployment goal of seven months set in 2014.

But even with these successes, the Navy still struggles with meeting maintenance timelines, which can have ripple effects for the fleet.

Bush’s delayed deployment was the result of the extension of its scheduled maintenance from eight to 13 months, U.S. Fleet Forces Command said in a statement to Stars and Stripes.

“The cause of that extension was shipyard and contractor performance and the quality of the repair on several pieces of equipment,” the command said.

After the extension, Navy officials determined there wouldn’t be enough time for training before the deployment unless they compressed Bush’s training cycle — much as they did before USS Dwight D. Eisenhower’s deployment — and deployed the Bush later.

Some experts wonder whether the OFRP can achieve its aims.

“OFRP has always been for me, an aspirational goal,” said Bryan McGrath, a retired Naval Officer and managing director of the FerryBridge Group, which specializes in national security and defense consulting.

If the president and command authorities need the forces, they will be given “irrespective of the Navy’s desires for regular maintenance cycles,” McGrath said. “Because the demand has not fallen, while the fleet size has, the ’no-margin-for-error’ approach to maintenance is doomed to fail.”

The U.S. and its allies have covered several carrier gaps in the Middle East in recent years without any serious consequences.

Ike’s return from deployment in December left the Middle East without a U.S. aircraft carrier and its accompanying ships. That means the U.S. and allies had to fill the gap with other platforms and capabilities to support the air campaign against the Islamic State in Iraq and Syria, not to mention maritime security operations in a vital theater for maritime commerce.

The Navy should try and maintain OFRP to get carriers to a consistent maintenance schedule, while also mitigating carrier gaps by exploring other options, said Bryan Clark, a senior fellow for the Center for Strategic and Budgetary Assessments, an independent, nonprofit institute focused on national security strategy.

“As we saw with Bush, the Navy’s carriers are suffering from the effects of repeated, prolonged deployments without adequate maintenance,” Clark said. He said the Navy could use Joint Strike Fighters on large-deck amphibious assault ships, allowing about 20 strike fighters to support operations against the Islamic State during gaps in carrier presence.

OFRP can still work, even with longer maintenance periods, but that means ships will have less time in the sustainment phase after a deployment, Clark said.

To shorten maintenance timelines, though, the Navy needs to focus on completing regular maintenance when scheduled.

“What happens when maintenance is missed or deferred is material problems get worse, just like when you put off getting regular maintenance on a car,” Clark said. “When the maintenance is eventually done, new problems have developed, and more extensive repairs may be needed. This takes longer, and because the new work must be planned after the start of the maintenance period, even longer delays ensue.”

The Navy has taken several measures to improve its maintenance process and complete maintenance on schedule, such as better planning and balancing workloads across shipyards, Fleet Forces said. They added these measures are improving maintenance timelines.

Even if maintenance timelines are addressed, some experts believe the fleet, including the number of aircraft carriers (currently 10) is too small to maintain the current operational tempo. The fleet has 274 ships. The Navy recently completed a new Force Structure Assessment that called for 355 ships, including 12 aircraft carriers.

That assessment shows the Navy realizes it needs to return to consistent operations in Northern Europe and the Mediterranean on top of the Middle East and Pacific, McGrath said.

Still, building a bigger fleet or maintaining the current force costs money, which the Navy has struggled to find.

Trump’s transition team has asked military officials what they could do with more money immediately, Vice Chief of Naval Operations Adm. William Moran said at the Surface Navy Association, according to Breaking Defense.

“The answer was to make sure the 274 (ships) we have were maintained to provide 274 ships’ worth of combat power,” Moran said. “Then we’ll start buying more ships. They heard that loud and clear, I hope.”