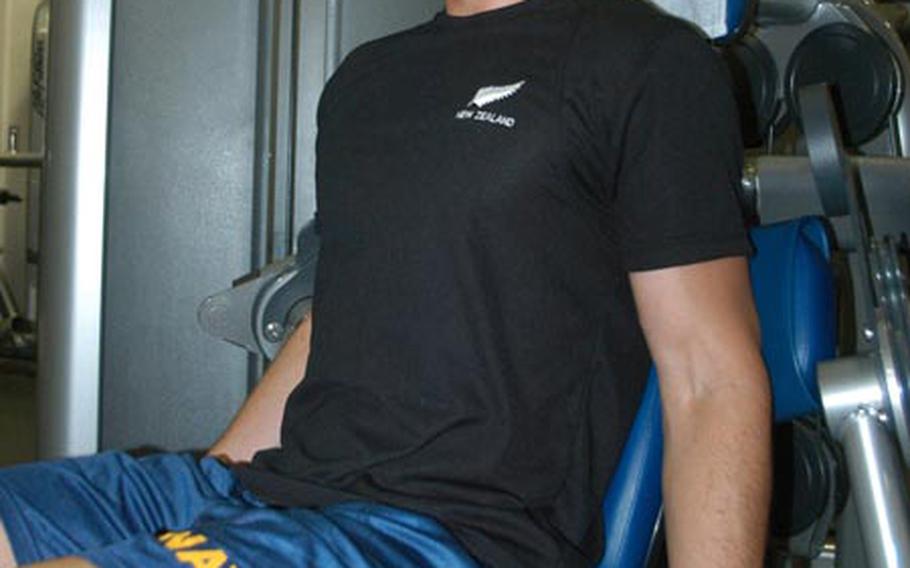 Petty Officer 3rd Class Ivan Mogensen of the aircraft carrier USS George Washington works out at the Purdy Gym at Yokosuka Naval Base, Japan, on Friday. In a new message released this week, sailors who have three physical fitness assessment failures in a four-year period are prohibited from being transferred, extended or re-enlisted. (David J. Carter / S&S)

YOKOSUKA NAVAL BASE, Japan &#8212; The Navy is cracking down on sailors who fail to meet physical fitness standards.

Commands can no longer transfer, extend or re-enlist sailors who have failed three physical fitness assessments in four years, according to a Navy message Tuesday. The sailors also face administrative separation.

This move is the latest in the Navy&#8217;s force-shaping efforts, designed to rid the ranks of underperforming sailors.

The Navy&#8217;s current pass rate for the semi-annual physical readiness test is 95.9 percent, up considerably from previous years.

Sailors at Yokosuka Naval Base, however, are well ahead of the average.

Archie said sailors he encounters are taking the policy seriously.

"Participation has definitely gotten a lot better over the last couple of years," he said. "I&#8217;m seeing a lot more people in the gym throughout the day."

Starting next fiscal year, fitness will be reviewed as part of the Navy&#8217;s advancement and promotion process, and failure is something that Archie says can truly hurt careers.

"Failures at the E-6 and below level can adversely affect a sailor&#8217;s evaluation," he said. "But they&#8217;ll play an even bigger role at the khaki level; they&#8217;re the ones who are supposed to be setting the example."

With the current performance-based continuation boards for E-7 through E-9s, a failed physical fitness test can be the difference between retention and retirement.

Sailors in Yokosuka have access to 24-hour fitness facilities, command-organized physical training, and dozens of programs in place to help them succeed.

"The Navy is very accommodating in terms of physical fitness," Archie said. "It&#8217;s up to the sailors to take advantage of it."

Sailors with two PFA failures in three years are barred from these assignments: