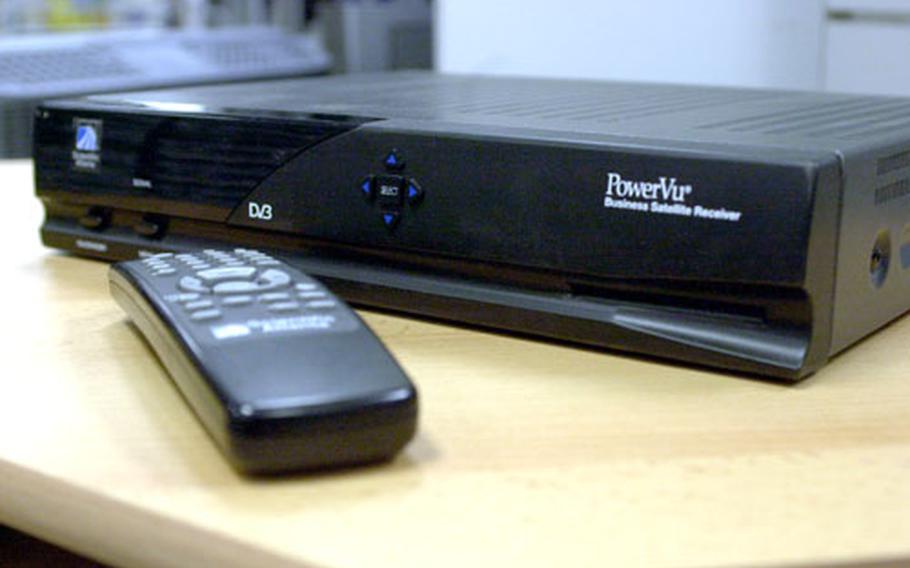 The Navy is finalizing details in hopes of providing free television decoders and satellites to Europe-based sailors in the coming months in an effort to keep them connected to American TV programming, officials said.

The plan is especially important for sailors based in Italy, who will lose the ability to get American Forces Network programming come Jan. 1, when the Italian government takes back the frequency that AFN uses to broadcast in that area.

Currently, sailors living off base can use an antenna to view one AFN channel. After the new year, however, they will need a decoder and satellite in order to get AFN channels.

Officials from Navy Region Europe and Command Navy Installations, which holds the purse strings, are trying to work out a plan that would provide sailors with free decoders, satellites and installation, said Lt. Cmdr. Lisa Braun, a spokeswoman for Navy Region Europe.

He was told the funding fell through, however.

While there is disparity throughout the U.S. military community in Europe over who should be given decoders and who should shell out the money to buy them, military leaders are working to bridge the gap, said Lt. Cmdr. Rick Haupt, a spokesman for the U.S. European Command.

The financial burden falls to the individual services, Haupt said. EUCOM &#8220;does not fund training and equipping activities,&#8221; which includes the decoders, satellite dishes and installation, he said.

AFN provides American TV shows, news and sports from the United States through free, over-the-air transmitters placed near bases. Those who live out of the range of the transmitters have to buy or rent a satellite dish and receiver to pick up the programming. With a satellite hook up, viewers can get more than six channels of programming.

Decoders currently cost between $535 and $565, or can be leased for about $25 a month. New decoders are coming on the market that will cost about $250. It is still unknown when the new decoders will become available.

Some military members already are getting the decoders on Uncle Sam&#8217;s dime. For example, personnel at Aviano Air Base in northern Italy already can check out decoders for free as they do their washers and dryers.

By November, Army personnel stationed at Vicenza, also in northern Italy, should receive their decoders and dishes at no charge. U.S. Army Europe decided to spend about $800,000 from its operational budget to fund the decoders and installation for Vicenza because of the Italian government&#8217;s move to take back the frequency, spokeswoman Maj. Elizabeth Hibner said.

The Army would like to buy decoders for Germany-based units, but has not received funding for that, and officials are waiting for the completion of drawdown plans before making any decisions, she said in a telephone interview Wednesday. USAREUR doesn&#8217;t want to buy more decoders than it will need, Hibner said.

Staying connected to AFN is more than just for entertainment, said Capt. Phillip Ulmer, a spokesman for U.S. Air Forces in Europe.

&#8220;AFN is a vital source of command internal information, anti-terrorism and force-protection information,&#8221; he said in an e-mailed statement. &#8220;USAFE recognizes the critical need to expand its reach from USAFE members and families living in U.S. government housing to include those living on the local economy within host nations, which is why USAFE is working to provide communities without access to over-the-air AFN TV programming with decoders.&#8221;