Navy spouses get help in learning the ropes through Compass course 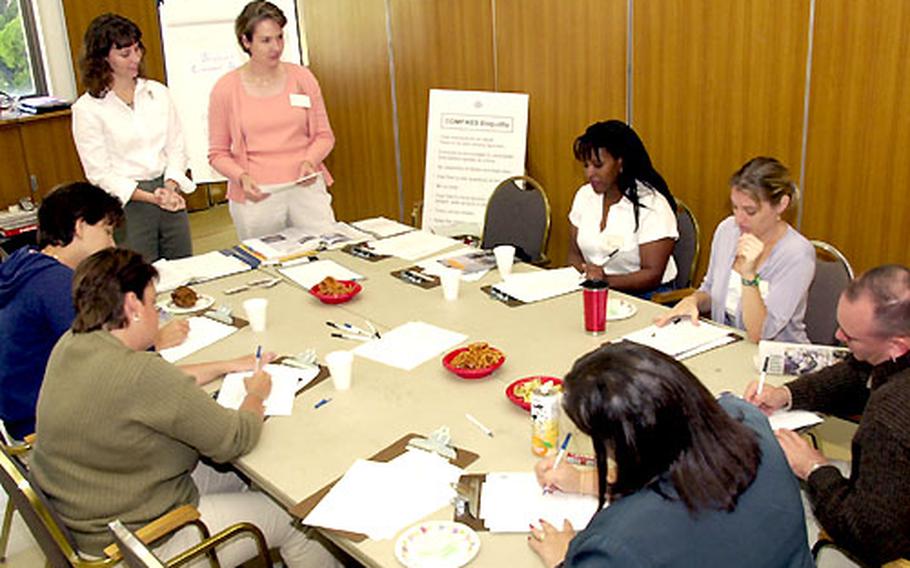 Jenny Cox (standing, left) and Michelle Smith (standing, right) mentor spouses on the Navy lifestyle and the challenges of Navy life, Tuesday at the Chapel of Hope at Yokosuka Naval Base, Japan. (Jim Schulz / Stars and Stripes)

YOKOSUKA NAVAL BASE, Japan &#8212; Paullette Reed has logged 10 years as a Navy spouse &#8212; but a summer mentoring class taught her she still had much to learn about the Navy.

She and five other seasoned spouses became the first in Japan to lead a new Navy spouse-to-spouse mentoring program called Compass.

The class was designed in the States by Naval Services FamilyLine three years ago to replace the informal indoctrination in which spouses learned gradually from their experienced counterparts.

On Tuesday, a handful of wives and one husband gathered for the first Compass course offered in the region.

They learned about benefits such as the commissary and college courses on base, and about Navy finances such as sea pay and overseas allowances. They also learned how to read a leave and earnings statement &#8212; one of the most important and often confusing documents servicemembers receive.

Participants also will learn about Japan and local attractions, Navy ranks and tips for managing conflicts and depression.

Plus, through Compass participants are introduced to a dozen new friends.

The name Compass is a metaphor for navigating through life with the Navy, said mentor Michele Smith. Like Reed, she found she had a lot to learn when she took the mentoring class.

Compass is designed to be relaxed, interactive and fun, sponsors said. Participants play games, such as using flashcards to match uniform insignia to the correct ratings. They use first names only &#8212; to keep the sessions comfortable and informal, they&#8217;re asked not to disclose their servicemembers&#8217; ranks.

The content, however, is detailed and structured. It&#8217;s broken into 12 one-hour segments presented over three days.

The program is now offered only in English, but organizers hope to include written materials in other languages for foreign-born spouses, said Lauri Dittmer, far east regional director.

Compass will be offered monthly at Yokosuka and eventually at other Navy bases in the Pacific, Dittmer said.

FamilyLine sponsors the free, voluntary program for any Navy husband or wife; child care and snacks are provided, organizers said.

Even spouses who have been with the Navy for years might find it valuable, particularly if they&#8217;ve never lived in a close-knit overseas Navy community, Dittmer said.

Those wishing more information about Compass, organizers said, should phone Christi Harr, Yokosuka team leader, at 241-3765. The next three-day programs are scheduled for Oct. 28 to Oct. 30 and Nov. 18 to Nov. 20.