Navy sorting out pirates after vessel seizure off Somali coast 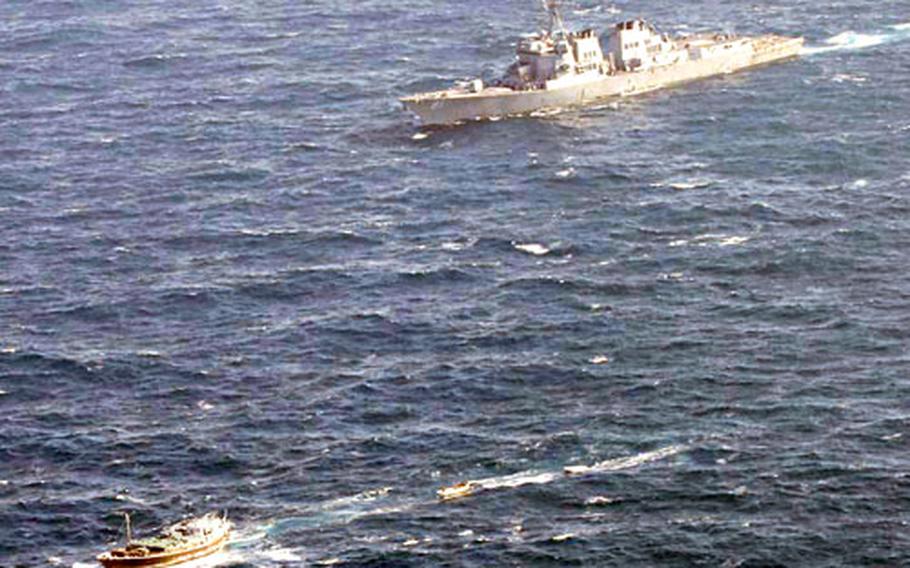 The Navy is trying to determine which of the people aboard a suspected pirate vessel seized over the weekend may in fact be pirates, 5th Fleet spokesman Cmdr. Charlie Brown said Monday.

On Saturday the guided missile destroyer USS Winston S. Churchill stopped a dhow about 54 miles off the coast of Somalia after a ship reported it had come under attack by pirates. Sailors then found a weapons cache aboard the dhow.

The suspected pirates are now aboard &#8220;U.S. naval assets in the area,&#8221; Brown said in an e-mailed response to questions.

&#8220;Some of the Indian nationals who have already been identified as crewmembers of the dhow allege that the pirates hijacked the vessel six days ago off the coast of Mogadishu, and it is now suspected of being used as a support vessel for pirate attacks on merchant shipping,&#8221; Brown said.

The Navy is investigating the matter and will work with international authorities, Brown said. &#8220;The disposition of people and vessels involved in acts of piracy on the high seas are based on a variety of factors, including the offense, the flags of the vessels, the nationalities of the crew, and others,&#8221; he said.

As part of the Navy&#8217;s investigation, Navy officials will look into whether the suspected pirates who were captured took part in an attack on the cruise liner Seabourn Spirit in November off the Somali coast, said Navy spokeswoman Lt. Leslie Hull-Ryde.

Pirates attacked more than 20 ships off Somalia between March and November in 2005, including one relief vessel that was held for ransom for 14 weeks.

Pirates typically fire on ships with rocket-propelled grenades or automatic weapons, forcing the vessels to slow down so the pirates can commandeer them.