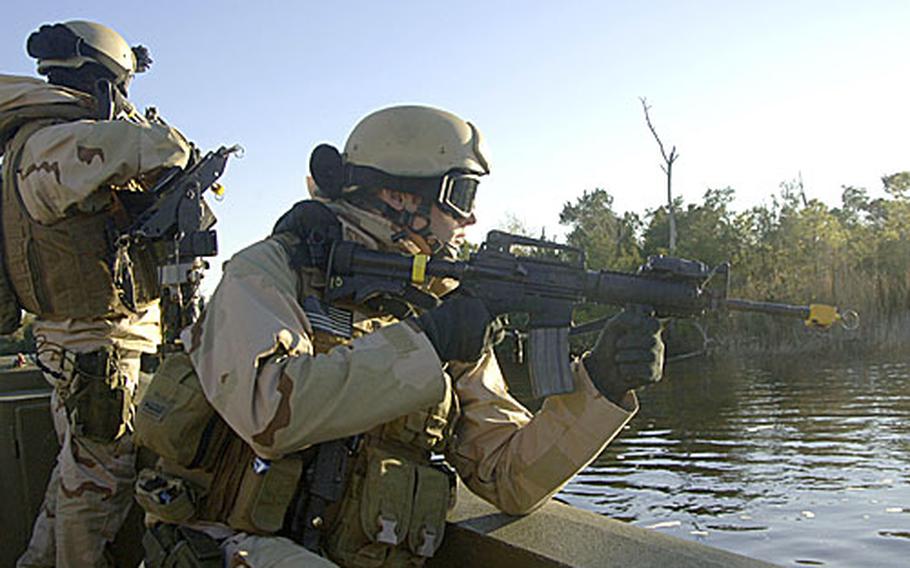 Sailors assigned to Riverine Squadron One prepare for their final exercise and evaluations near Camp Lejeune, N.C., in December. The Navy Expeditionary Combat Command, formed last year and tasked with taking the war inland, has resurrected the Navy&#39;s riverine capability. (Jackey Bratt / Courtesy of U.S. Navy)

Redpath is vice commander of Navy Expeditionary Combat Command (NECC), which was established last January to serve as an umbrella group for sailors involved in taking the war from deep to shallow water and far inland.

One of the command&#8217;s accomplishments over the past year has been to resurrect the Navy&#8217;s riverine capability, which largely disappeared after Vietnam, Redpath said.

Realizing it needed to resume its river patrol mission, NECC established a squadron of about 200 riverine sailors who are about to finish their preparations to deploy to Iraq later this fiscal year, Navy officials said.

The command plans to establish a second riverine squadron next month and a third squadron later this year, according to the Navy.

NECC has about 40,000 sailors in specialties as disparate as construction, explosive ordnance disposal, coastal warfare and logistics support, Redpath said.

The sailors in NECC have a distinctly different appearance from sailors in other commands.

Not only do the NECC sailors look like ground troops, but many are also tasked with helping ground forces nowhere near the water.

NECC is responsible for individual augmentees, who are sailors sent to theaters of operations to supplement other branches of the service, such as the Army and Marine Corps.

About 8,500 individual augmentees are now serving in the U.S. Central Command area of operations.

In the past year, NECC has established the Expeditionary Combat Readiness Center, which is in charge of training and equipping the augmentees, Redpath said.

Despite their variety of missions, all NECC sailors share a common definition, Redpath said.