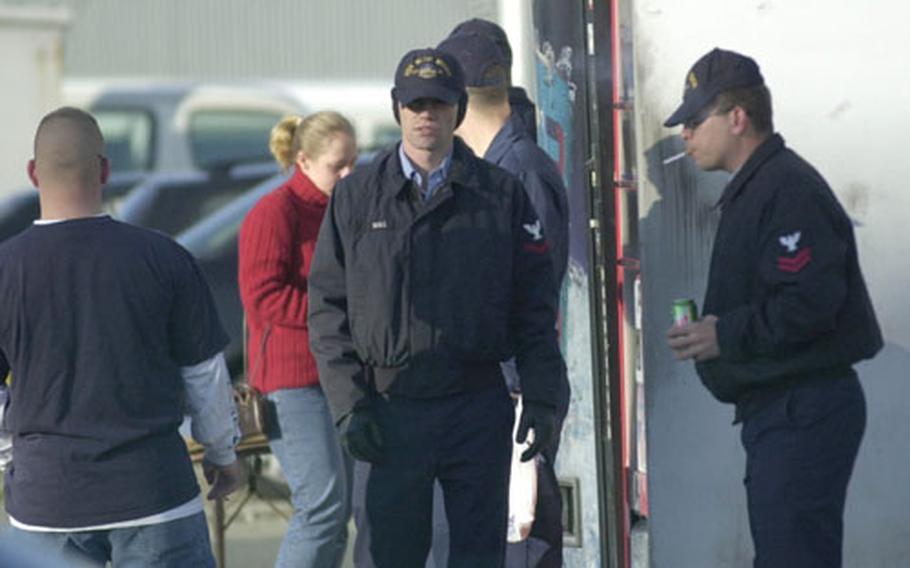 Sailors at Yokosuka congregate at the end of their pier to smoke on a cold December morning. (Jason Carter / S&S)

YOKOSUKA NAVAL BASE, Japan &#8212; You can hear the collective grumble reverberate through the ship when the announcement is made: &#8220;The smoking lamp is out.&#8221; The only solace for some comes in the knowledge that a few hours later, it will light again and sailors can head into the fresh ocean air for a quick cigarette.

But what if the smoking lamp never came back on?

The possibility isn&#8217;t that far-fetched. Official military messages call smoking &#8220;a health issue, but also one that affects readiness, military bearing, and leadership by example.&#8221; In early December, all base clubs implemented a new military regulation and went smoke-free; sailors in boot camp already are prohibited from using any tobacco products during their eight- to 10-week stay at Great Lakes, Ill.

So what would you do if the military followed on the heels of several police and fire departments in the United States and ordered that all its personnel quit?

No proposal for a servicewide ban on the use of tobacco products is in the offing, but a series of regulations in recent years have tightened rules on when and where servicemembers can light up. Certainly gone are the days when ration packs came with a box of unfiltered cigarettes (though they still contain matches).

In 1994, the Navy officially banned smoking from most spaces on ships and in its buildings ashore. The new rules provided for out-of-the-way smoking areas, to be used only at a commanding officer&#8217;s discretion.

&#8220;Commanding officers will designate smoking areas on Navy vessels not to encourage smoking, but to provide a place for smokers who are having a difficult time quitting,&#8221; Lt. Cmdr. Nancy Godfrey, then the Tobacco Prevention/Cessation Programs officer at the Bureau of Naval Personnel, said in a Navy news release at the time.

A few years earlier, new regulations came down saying that sailors in boot camp face severe penalties if caught using tobacco products. Since then, officials have become even more clear on the service&#8217;s opinion of tobacco use.

&#8220;Tobacco use adversely affects night vision, respiratory capacity, and wound healing rates, and contributes to risk of cold injuries, including frostbite. Statistically, smokers have higher accident rates than do nonsmokers,&#8221; reads a Secretary of the Navy Instruction from 1998.

The Navy Department policy, according to the same instruction, is designed to reduce tobacco use and protect nonsmokers from involuntary exposure to secondhand smoke.

Despite declining numbers in recent years, tobacco use &#8212; both smoked and smokeless &#8212; still is at a higher percentage in the military than in the general public.

The most recent available and reliable data, from a year 2000 study by the Navy, found an overall smoking rate of 34.9 percent in the Navy and 35 percent in the Marine Corps. The national average, according to the same study, is 25 percent for the general public.

The study also found that military smokers tend to be heavier smokers than normal, both in frequency and quantity consumed.

The use of smokeless tobacco products was reported at 13.2 percent throughout the Department of Defense, with the Marine Corps reporting the highest consumption rate at 24 percent; the Navy reported a 12 percent rate.

&#8220;It used to be you could go into almost any office, or any space on a ship, and someone would be there on duty puffing away. Now, it&#8217;s more of a break than anything. Whenever you want to have a talk with someone or just get away from your job for a second, you head to the smoking sponson&#8221; or area.

And even though the Navy and Marine Corps ban tobacco use during recruit training, Navy research shows that up to 10 percent of graduating boot camp recruits begin a tobacco habit upon leaving basic training and up to 80 percent of previous users return to their tobacco habit after they graduate.

Army, Air Force move to put the kibosh on smoking

According to Army Regulation 600-63, issued in 1996, from the moment a recruit enters boot camp, tobacco use is &#8220;controlled.&#8221; Commanders and supervisors are instructed to &#8220;also encourage family members and retirees to engage in appropriate anti-tobacco activities.&#8221;

And the Air Force joined earlier this month in a worldwide ban on smoking in all Morale, Welfare and Recreation facilities on military bases.

As part of routine physical and dental examinations, Army health-care providers are required to ask about tobacco use, including smokeless tobacco products, and advise their patients about the risks, the health benefits of abstinence and where to get help quitting.

In the workplace, smokers must be at least 50 feet from entrances. The smoking area, states the regulation, &#8220;if possible will provide a reasonable measure of protection from the elements ... and will not be located in areas that are commonly used by nonsmokers.&#8221;

The smoking preference of individuals is also a driving factor in room assignments, according to the regulation.

Like the Navy, the Army and Air Force, including Yokota Air Base, also have ordered their clubs to become smoke-free, with limited smoking areas. Signs posted at the Camp Zama Community Center, for instance, specify that all its facilities forbid smoking.

Soldiers indicated they share sailors&#8217; views against an outright ban on their right to smoke.

At least one soldier, however, said a total ban could be a good thing.