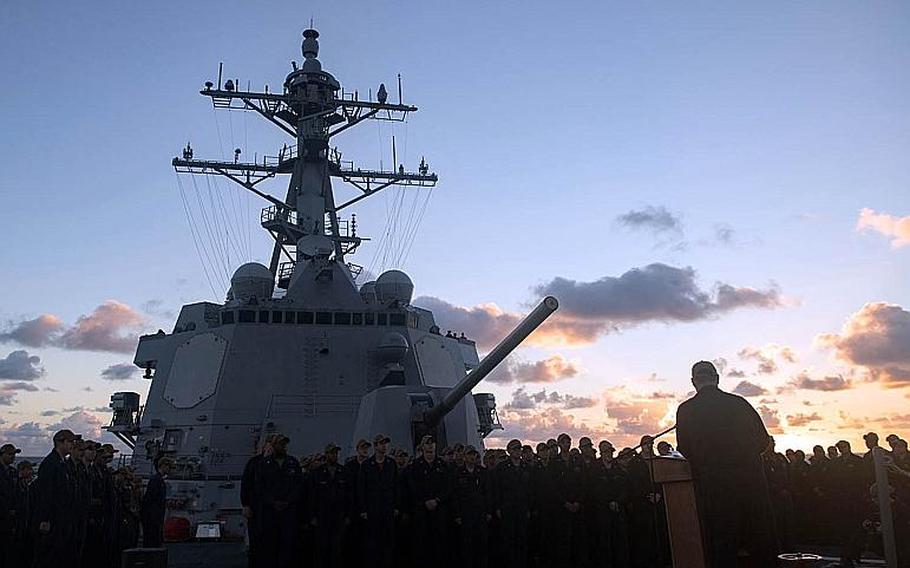 A pair of Navy ships sailed through the Taiwan Strait on Wednesday, just days before President Donald Trump is expected to meet Chinese President Xi Jinping during the Group of 20 summit in Argentina.

The guided-missile destroyer USS Stockdale and the replenishment oiler USNS Pecos made a “routine” transit that “demonstrates the U.S. commitment to a free and open Indo-Pacific,” Pacific Fleet spokesman Lt. Cmdr. Tim Gorman said in a statement.

China objects to Navy warships sailing the roughly 100-mile-wide strait that divides the Chinese mainland from self-ruled Taiwan, which split from China in 1949 at the end of a civil war. China regards Taiwan as a renegade province that must one day be reunified with the mainland.

Navy ships most recently passed through the strait in July and October. After the October transit of a guided-missile destroyer and guided-missile cruiser, the state-run China Daily newspaper criticized the Trump administration for “playing a high-stakes game backing Taipei.”

China has been flexing the growing might and reach of its navy, holding its largest-ever fleet review in April in the South China Sea near the coast of Hainan Province.

Attended by Xi, the fleet review included 48 ships, among them the country’s only operational aircraft carrier, China state media reported.

The South China Sea is frequently the flashpoint between China and the Navy, which conducts regular freedom-of-navigation transits near disputed islands in the South China Sea. China, Vietnam, Philippines, Taiwan, Malaysia, Indonesia and Brunei have asserted varying degrees of sovereignty over those islands.

The aircraft carriers USS Ronald Reagan and USS John C. Stennis held joint drills off the coast of the Philippines earlier this month near the disputed Spratly Islands. China has expanded some Spratly atolls by dredging sand and then building military facilities and other infrastructure upon them.

During the carrier drills, Chinese foreign ministry spokeswoman Hua Chunying told reporters in Beijing that the “pretext” of freedom-of-navigation operations by the United States was “undermining the sovereignty and security interests” of nations bordering the South China Sea.