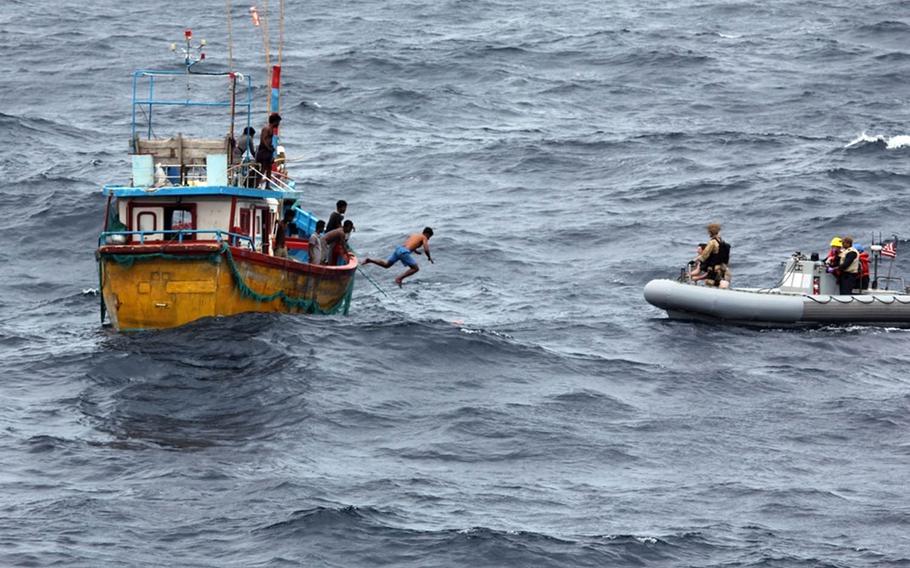 A Sri Lankan fisherman jumps to swim to an inflatable boat from the guided-missile destroyer USS Decatur in the Indian Ocean, Sunday, Oct. 7, 2018. (Courtesy of the U.S. Navy)

A Sri Lankan fisherman jumps to swim to an inflatable boat from the guided-missile destroyer USS Decatur in the Indian Ocean, Sunday, Oct. 7, 2018. (Courtesy of the U.S. Navy) 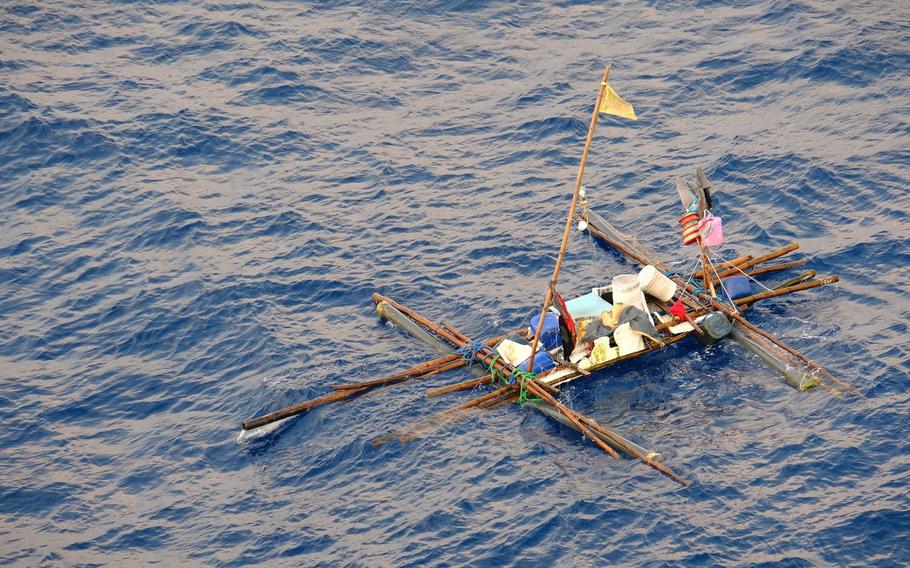 A makeshift boat filled with minimal supplies is adrift in the South China Sea, Monday, Oct. 8, 2018. Five Philippine fishermen survived for five days aboard the craft after their boat sank at sea. They were rescued by the crew of USNS Wally Schirra. (Courtesy of the U.S. Navy)

The men were waving their arms and flashing lights to capture the crew’s attention, Keith Sauls, the Wally Schirra’s civilian captain, said in the statement.

Their fishing boat sank seven days prior to the rescue after a blue marlin punctured the hull, the statement said.

“The fishermen salvaged what they could from the rapidly sinking boat, removing the outriggers and planks to turn it into a raft with floats and barrels underneath for floatation,” civilian mariner Leon Hadley, the Wally Schirra’s chief mate, said in the statement.

Search-and-rescue swimmers used an inflatable boat to pull the fishermen to safety, the statement added.

“We’re lucky we found them when we did,” said Hadley, who added that the men had no water.

The Wally Schirra later transferred the fishermen to the Philippine Coast Guard in Subic Bay, Philippines, Sauls said in the statement.

The previous day, the guided-missile destroyer USS Decatur conducted its own rescue during a routine patrol of the Indian Ocean near southern Sri Lanka, the Navy said. Seven Sri Lankan fishermen were stranded after their boat suffered engine trouble and was incapable of returning to shore.

The Decatur’s crew assisted the men, giving them food, water and medical attention while awaiting Sri Lankan authorities, who arrived the next day, a Navy statement said.