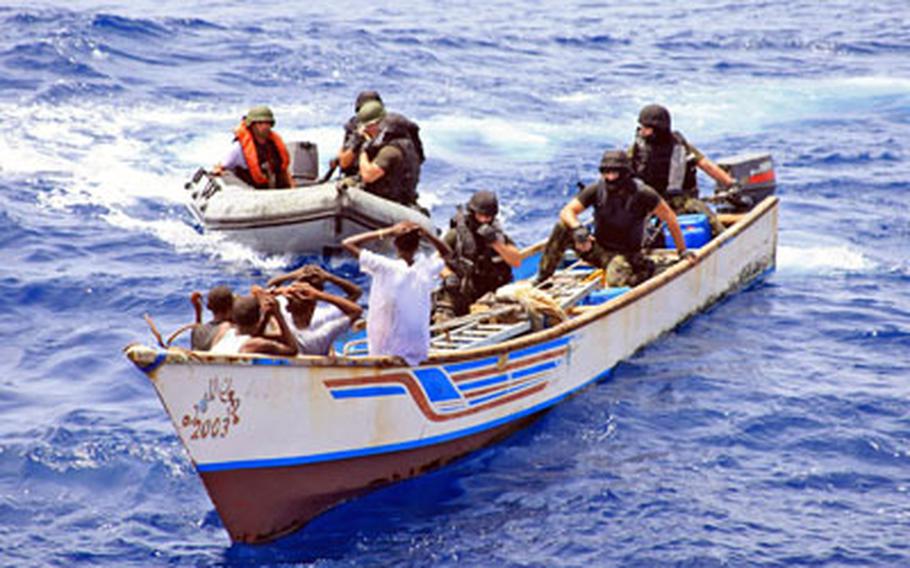 NATO forces detain suspected pirates in the Gulf of Aden area. Piracy attacks in the area are down this September compared to the same time last year. NATO and other military officials attribute the decline of successful attacks to a beefed-up military presence and merchant ships becoming better at protecting themselves. (Courtesy of NATO)

Piracy in the busy Gulf of Aden shipping lanes has plummeted recently as navies have honed their anti-piracy skills, changed tactics and taught merchant mariners how to escape attacks.

Mody attributed part of the decline to the establishment of a 492-mile corridor where navy vessels from European Union, NATO and the U.S.-led Combined Task Force 151 can escort packs of merchant ships to keep pirates at bay.

Military officials, however, are wary that pirate attacks will increase as the weather continues to improve in the area. The monsoon season is typically from June through September, and the improving weather means there is a potential for more attacks, said British Royal Navy Commander Chris Davies, spokesman for NATO&#8217;s Maritime Component Command in Northwood, England.

Davies said the monsoon weather, which started to subside a few weeks ago, could be one reason for the decline.

But there also has been an increase in the number of military vessels in the region, said U.S. Navy Lt. Nathan Christensen, spokesman for the Navy&#8217;s 5th Fleet.

There are 31 navy vessels from 17 countries operating in the Gulf of Aden &#8212; an area that is more than 1 million square miles, Christensen said. Only 14 ships from 14 different countries were in the area on January 3, 2009, he said.

Also, "ships are becoming more proficient at stopping these pirate attacks before they happen," said one NATO official who did not want to be identified. "NATO commanders are talking to merchant ships on the radio and sharing tactics. I was told the commercial ships have the NATO ships on speed dial."

Davies also credited NATO&#8217;s Operation Ocean Shield with helping to stem the pirate threat. Ocean Shield works with local governments, like the Puntland in Somalia, and helps bolster their anti-piracy capabilities. Recently the British ship HMS Cornwall and the American ship USS Donald Cook have worked with coast guard officers from the Puntland to identify areas where pirates may launch their operations to help curtail piracy.

Successful pirate attacks are also down for the year, even though the total number of pirate incidents has increased.

As of Wednesday there had been 142 incidents in the region this year, and 28 of those have been successful ship takeovers, Christensen said. Last year, there were 122 piracy incidents, with 42 of them successful.