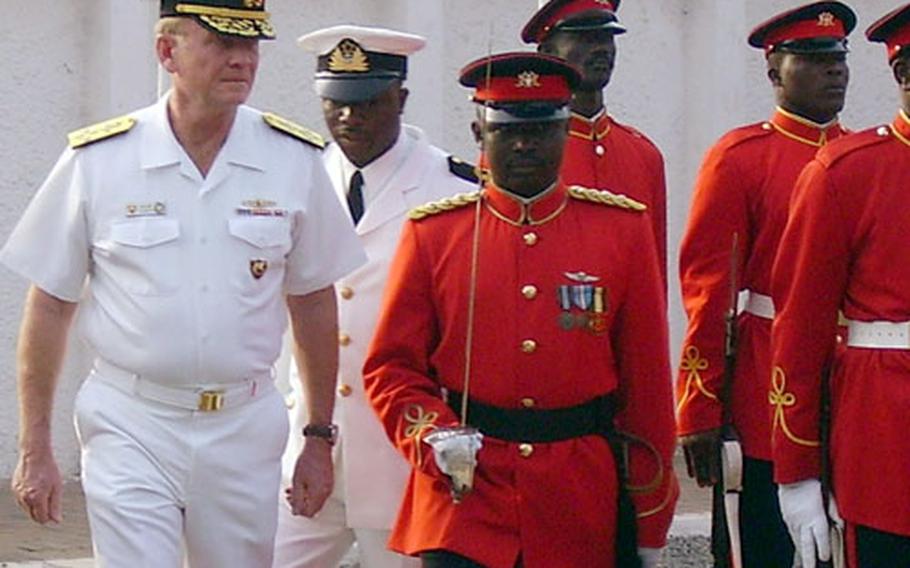 Adm. Harry Ulrich, commander, Naval Forces Europe, conducts a pass and review of Ghanaian military forces during his recent visit to Ghana. Ulrich recently met with the president of Ghana and other military and civilian leaders to discuss regional security issues in the Gulf of Guinea. (Courtesy of U.S. Navy)

While much of the military is focused on the Middle East, Navy leaders in Europe are casting long glances toward Africa.

Through the planned use of interconnected radar sites, west African nations in the Gulf of Guinea &#8212; and possibly U.S. military forces &#8212; are hoping to be able to track &#8220;ships engaged in suspicious activities,&#8221; according to a U.S. European Command.

Naval Forces Europe Commander Adm. Harry Ulrich has been in Africa over the past week, talking with leaders about the U.S. Navy&#8217;s presence in the region. Ulrich met with Ghanaian President John Agyekum Kufuour, along with other military and civilian officials, to discuss cooperative naval efforts, and maritime safety and security issues.

Ulrich touted the radar plan as a way to &#8220;economically benefit&#8221; the region by allowing legitimate shipping easy and safe access to nations&#8217; ports while keeping tabs on those &#8220;suspicious&#8221; ships.

According to the EUCOM news release, the region faces problems with fisheries poaching and piracy. &#8220;It is important to everyone in this region that safe access to the sea is maintained,&#8221; Ulrich was quoted as saying in the release. &#8220;Our ultimate success will be determined by the strength of the partnerships we develop and our combined will to work towards a common goal.&#8221;

During a Feb. 6 meeting in Pretoria, South Africa, with South African navy chief Vice Adm. Refiloe Mudimu, Ulrich said that the Navy would be deploying a ship to the Gulf of Guinea in April.

Naval Forces Europe officials confirmed that the La Maddalena, Italy-based USS Emory S. Land will be deploying to the region. It will be visiting five unnamed ports in the region.

This will be the second consecutive year that the submarine repair ship will deploy to the area. Last year, the ship and its 1,200-member crew spent two months in the region, providing training for some of the region&#8217;s naval officers and helping nations develop their own maritime security plans to combat problems ranging from smuggling to piracy.

Next month, Ghana will host the Gulf of Guinea Regional Maritime Safety and Security workshop. Officials from Gulf of Guinea nations and South Africa will attend the workshop, sponsored by U.S. European Command; U.S. Naval Forces, Europe; and the Africa Center for Strategic Studies.