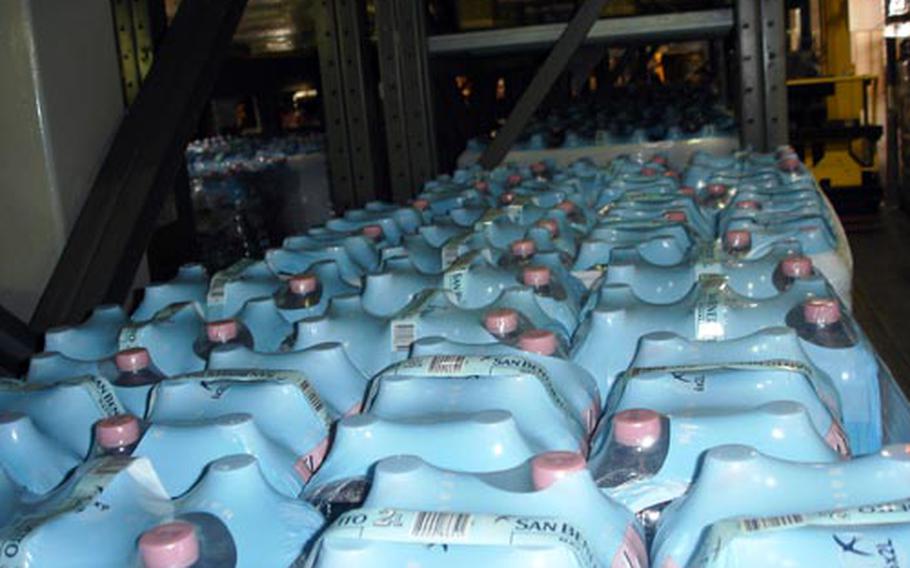 Navy Region Europe requested permission from the Secretary of the Navy to buy and distribute bottled drinking water to off-base residents in Naples. A Navy Exchange official says the command has ordered more than 300,000 liters of water in anticipation, should the Navy go through with a distribution program. (Lisa M. Novak / S&S)

NAPLES, Italy &#8212; A formal request to buy and distribute water to off-base residents in Naples now sits with the Navy&#8217;s top leader.

Secretary of the Navy Donald Winter has not yet seen the request submitted by Rear Adm. David Mercer, commander of Navy Region Europe, but it "has arrived at the Pentagon and is being routed," according to Winter&#8217;s spokeswoman.

Last month, Navy officials in Naples said no decision had been made on the Navy&#8217;s purchasing of the water. However, a preliminary plan indicated that off-base residents would receive five liters of drinking water per day and that the use of bottled water would be mandatory for those living in homes where water testing indicated higher-than-permissible bacteria levels. The Navy now says that people should receive four liters per day.

Navy officials are advising all off-base residents to use bottled water because they may be exposed to contaminants in their homes.

The Navy is currently conducting a health assessment on air, soil and water quality as a result of concerns over the decadeslong trash crisis in Naples.

Gricignano, where the Navy support site is located, is home to several thousand servicemembers, civilians and families occupying base housing. Phase I of the water and soil sampling only tested off-base homes. Officials have not indicated any plans to test water in individual residences on the support site, but did release information characterizing the water source for the support site as "a relatively pristine supply from well-protected sources."

In August, officials said the Navy Exchange had ordered more than 300,000 liters of water, in anticipation of selling it to the Navy for distribution to eligible personnel living off base.

In an all-hands e-mail dated Sept. 4, Navy Region Europe officials said they were "pursuing options via the Navy chain of command to either provide bottled water free of charge, or to increase allowances to offset the cost to U.S. Personnel in the Naples area."

Navy officials in Naples did not respond to questions regarding details of the request sent to Winter.