Navy secretary, visiting Naples, shares his view of the future 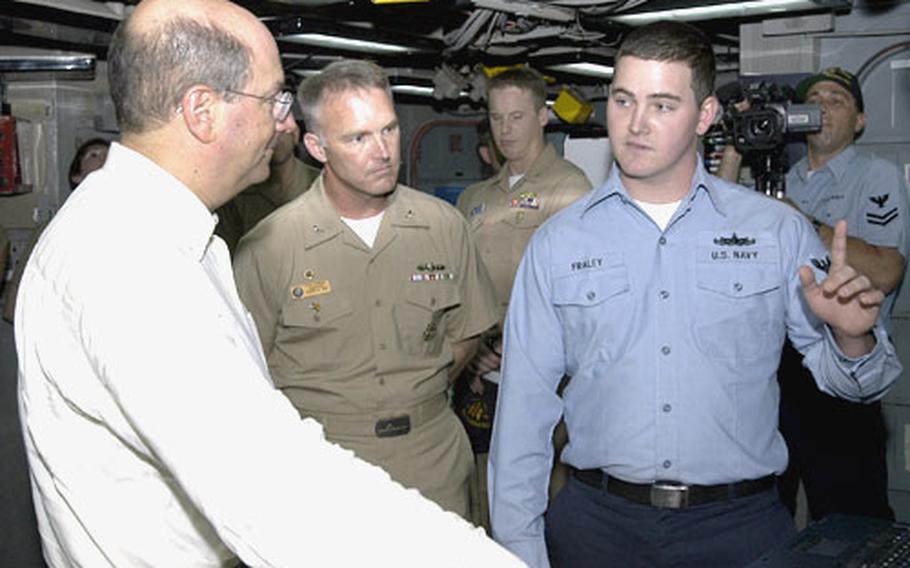 NAPLES, Italy &#8212; In five to 10 years, U.S. naval bases in Europe will &#8220;not be as large&#8221; and will take on more of a support role for deployed forces as the U.S. military shifts its focus in the fight against terrorism, Navy Secretary Donald Winter said Friday.

&#8220;Our forces were established in Europe to counter a Soviet threat that very fortunately is not a part of today&#8217;s planning,&#8221; Winter said. &#8220;In the past, we had some idea of what was going to happen, what could happen. ... We&#8217;re not looking across the Iron Curtain or looking across the DMZ anymore. It is all over the place, so we have to be prepared to deal with areas we haven&#8217;t dealt with [in the past], and the general concept is east and south.&#8221;

Winter, who took office in January, landed Friday at the spruced up Naples base for a two-day stopover to meet with sailors and top Navy leaders. He had just spent a few days with sailors aboard the submarine tender USS Emory S. Land, now in the final phases of a deployment to the Gulf of Guinea.

In an interview, Winter noted the importance of deploying naval forces to countries the Land recently visited, such as Angola, Sao Tome and Principe and Gabon.

Training those countries to protect their own waters means the United States doesn&#8217;t have to go in and do that for them.

Preparation for Winter&#8217;s visit to Naples took weeks, as sailors and contractors alike were seen powerwashing sidewalks, picking up cigarette butts, and even washing trash cans.

Winter met with roughly 300 sailors in a town hall meeting closed to the media. But sailors who attended said they asked questions about the training for individual augmentees and the impact the Navy&#8217;s transformation is having on the civilian workforce.

Lt. Cmdr. Perry Suter, head of security at Naples, voiced concern that the current two-week ground combat training sailors get might not be enough, Suter said in an interview afterward.

Winter agreed, Suter said, but added the service isn&#8217;t starting from ground zero and some lessons can come from sailors who already serve along ground forces, such as Seabees, medics and SEALs.

Sherryl Rutten, an information assurance manager for Navy Region Europe, said she asked Winter for details on how civilians&#8217; pay and benefits can remain competitive against the civilian workforce.

Winter answered that the Navy&#8217;s transformation also includes development of a personnel system that is still in early testing stage, she said.