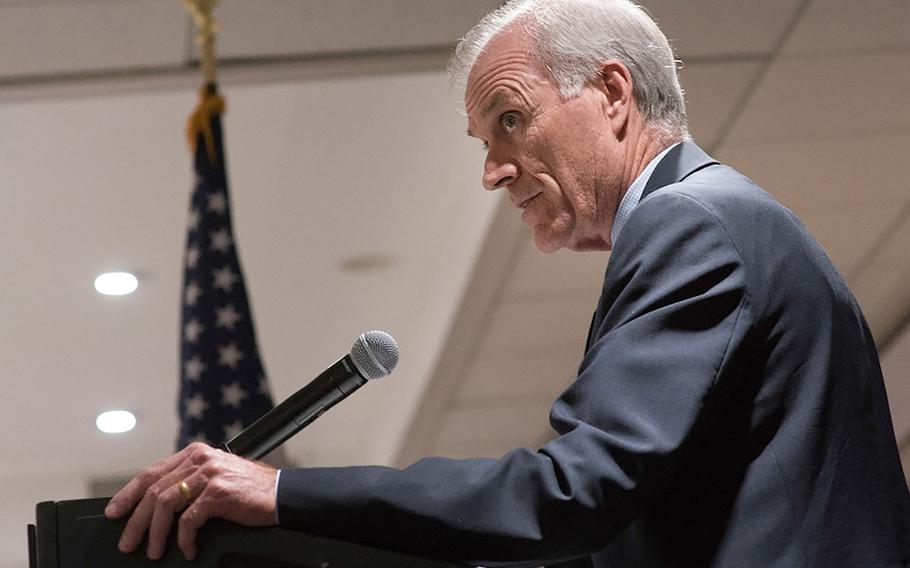 WASHINGTON — Ahead of a congressional hearing on a rash of recent warship crashes, Navy Secretary Richard Spencer said Wednesday that the service will do its part to address rising concerns about safety.

Spencer said the Navy is consulting with several industrial partners to conduct their own probe. The effort aims to find causes for the crashes, who’s responsible and boost safety for servicemembers, he said.

The crashes “are being investigated,” said Spencer, who made the remarks during a defense conference in Arlington, Virginia outside of Washington, D.C. “We are going to hold those responsible accountable, but more importantly, we are going to learn from these events.”

The comments come in the wake of two deadly Navy crashes this summer involving the USS John S. McCain and USS Fitzgerald. The McCain crash left 10 sailors dead in August, while the Fitzgerald crash, in June, left seven dead.

Thursday afternoon, a House Armed Services subcommittee will hold a hearing to address Navy readiness, assessing the McCain and USS Fitzgerald crashes. The subcommittee is expected to hear from several Navy officials.

Thornberry, R-Texas, added these “were a series of accidents that most of us thought would not, could not happen.”

The probes into the crashes will hopefully set the stage for an eventual reset, and for subsequent improvements, Spencer said.

But Spencer conceded many challenges lie ahead, from addressing budget issues to readiness concerns.

Spencer said commanders need all the ships they can get, not just to respond to hostilities but to reassure allies. But reaching the 355 ships that the Navy has said it needs is an uphill battle.

“We are exploring every option,” Spencer said of addressing ongoing needs. “Everything is on the table.”

But there’s plenty that can be done in the interim, he said.

For example, he said he hopes the Navy can doggedly pursue efficiencies. As the Navy develops, Spencer said he will be certain that “lessons learned are lessons applied.”

“We must focus on speed, value, results, partnerships,” he said.

“For too long, we have been distracted from our core calling,” he said. “I aim to bring back the focus.”