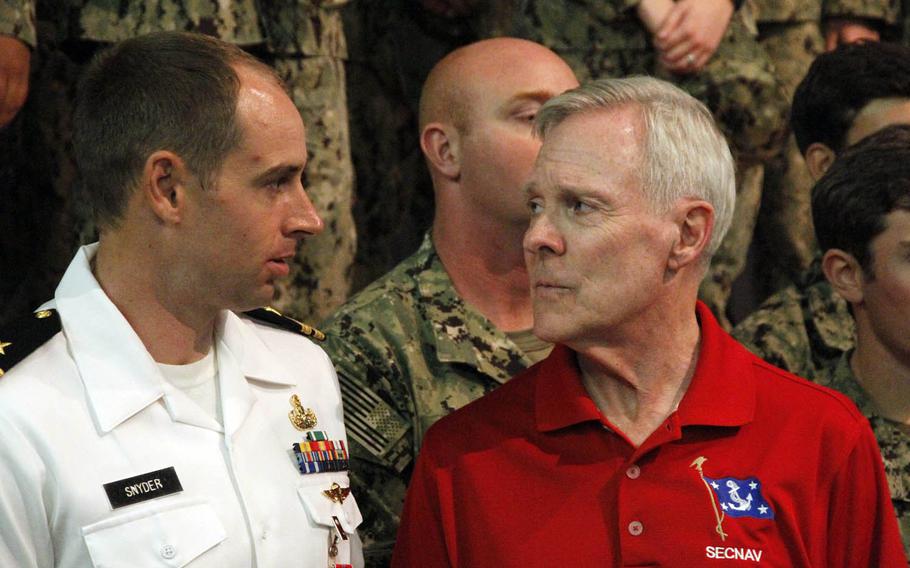 Secretary of Navy Ray Mabus, right, stands beside Lt. Mark Snyder, who was presented the Bronze Star at Joint Base Pearl Harbor-Hickam, Hawaii, Wednesday, Nov. 16, 2016. Mabus is on an around-the-world trip, perhaps his last before retiring in January after seven years in the position. (Wyatt Olson/Stars and Stripes)

JOINT BASE PEARL HARBOR-HICKAM, Hawaii — The secretary of the Navy assured sailors at an all-hands call here Wednesday that changes in the Navy’s ratings will benefit their lives and careers.

“I understand that there’s a lot of churn about it,” Ray Mabus told several hundred gathered sailors. “I also understand that a lot of the churn is coming from the alumni association, the retired community.”

Mabus ribbed the traditionalist naysayers by joking that the Navy was “pretty perfect” when he got out in 1972, and “then they went and messed it up.”

“I think if you give the feedback in terms of how we do it — not whether we do it — it’s going to be a way to a more flexible system,” he said. “And when we hear that it’s going against Navy tradition -- not so much, not so much. We change rating structures all the time.”

A petition opposing the proposed rating changes, which were announced in September, has garnered more than 100,000 signatures. The White House issued a statement Wednesday supporting the new system for the same reasons that Mabus outlined.

The changes would replace traditional Navy ratings such as boatswain’s mate and gunner’s mate with military occupational specialties common to other services.

Mabus’s stop in Hawaii is part of what could be dubbed his legacy tour, which will include New Zealand. Australia, Singapore, Bahrain and Saudi Arabia, as he prepares to retire in January after serving seven years.

“I’m winding down,” he said. “I’ll leave the day the president leaves.” Donald Trump assumes the presidency from Barack Obama on Jan. 20.

The idea of changing the ratings came from the Master Chief Petty Officer of the Navy, not from Mabus or the chief of naval operations, he said. “But we support it.”

“The only thing we were looking at in the beginning was a change in some of the titles to make them gender-neutral,” he said. “We change titles all the time. When I was in [the Navy] people in my division were radarmen and signalmen. How many of those have we got today?”

And corpsmen were once called “loblolly boys.”

But in the course of reviewing the rating system, it was determined to be too rigid, in some cases preventing promotions or getting the next duty station that sailors needed or wanted, Mabus said.

Using the example of aircraft technicians, he explained the benefits of the rating change.

“We have six different ratings for aircraft technician,” he said. “Every one of them is pretty narrow. You’re still going to have that one narrow thing, but while you’re doing that, you can qualify on one or two or all the other five. So if you can’t promote in your narrow specialty, maybe you can promote in one of the others. A lot of times because these specialties are so narrow, you have no next duty station or there’s only one choice. This way, if you can’t get to the next duty station that you want on your primary specialty, maybe you can get it in one of the others.”

The rating changes are also expected to help sailors ease back into the civilian workforce.

For example, an aircraft mechanic coming out of the Navy today can’t easily get a job at civilian airlines because they need to “start over,” Mabus said.

“We’re going to line up the training and certification with what the [Federal Aviation Administration] has,” he said.

Likewise with medical corpsmen. “Everybody in here knows what a corpsman does,” he said. “I’ve got to tell you, not many people on the outside do. And corpsman who are highly trained should be able to walk out the door and be [emergency medical technicians]. Can’t do it now because the certification is not there.”

One sailor asked whether this emphasis on transition to the civilian world was signaling a force reduction.

But many particulars about the rating change, which will take place over two years, have yet to be worked out, Mabus admitted.

One sailor, reminding Mabus of the Navy adage, “Choose your rate, choose your fate,” asked whether sailors would have a chance to “cross rate” under the new scheme.

“It ought to be a lot more,” Mabus said. “It should open up in terms of cross ratings. That’s one of the reasons it was done.”