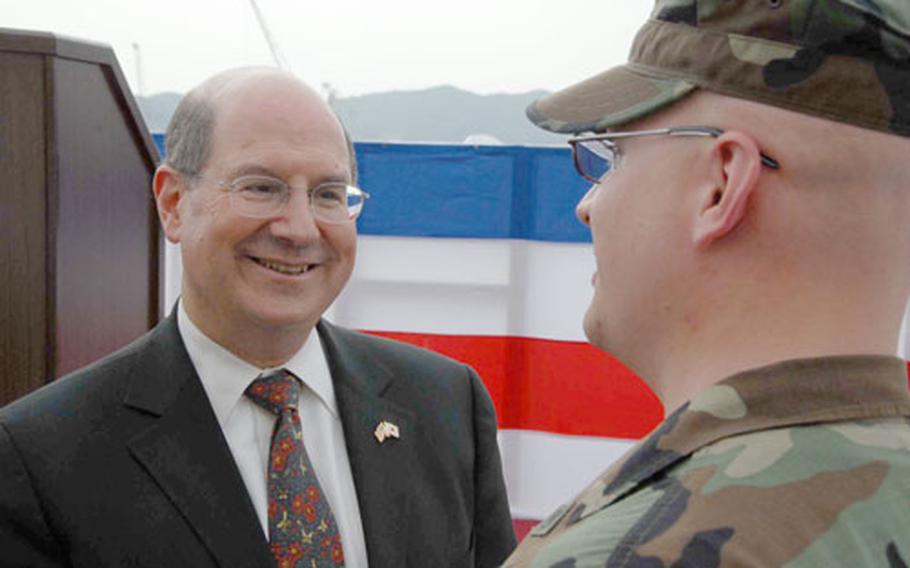 Secretary of the Navy Donald Winter meets Petty Officer 3rd Class Jeffrey Wachendorfer on Wednesday during a rare visit by a top Navy official to Sasebo Naval Base, Japan. Winter spent about 45 minutes shaking hands with hundreds of sailors at the base. (Travis J. Tritten/S&S)

SASEBO NAVAL BASE, Japan &#8212; Secretary of the Navy Donald Winter met with hundreds of sailors here Wednesday, telling them the forward-deployed 7th Fleet plays an important role in the region.

Winter traveled from South Korea, stopping at Sasebo on his way to Naval Air Facility Atsugi. And he was to attend Thursday&#8217;s scheduled arrival of the aircraft carrier USS George Washington at Yokosuka Naval Base.

From a mixed crowd of officers and enlisted sailors, the secretary fielded questions on the U.S. economy, Russian aggression and the Navy&#8217;s littoral combat ship program.

Winter said he made the visit to "get a firsthand sense of what is happening in Sasebo," and he spent about an hour with the Navy servicemembers.

"You are the best indicators of what America stands for and represents," he said.

So far, the economic turmoil in the United States has not affected the Department of Defense budget, and Congress has been generous with its support of the Navy, Winter said.

"I am hopeful &#8230; that we will still get a yearly budget before Congress recesses," he said.

When asked whether the Navy would curb visits to Vladivostok, Russia, after that country&#8217;s incursion into the Republic of Georgia, Winter said the Navy is taking a "hard look" at the overall issue but that the United States should take a somewhat measured response.

"We cannot overreact" to unexpected aggression by Russia, he said.

Meanwhile, the Navy&#8217;s littoral combat ship program has had a "few issues," but after receiving the first LCS this month, the Navy could begin deploying the new ships within four to five years, Winter said.

The ship program has suffered cost overruns and delays.

"It is going to take a few years to ramp up production," he said.

In November, Winter said, he will attend weapons testing on an LCS.

He projects the Navy will eventually commission 55 of the vessels.

The LCS, which began production by Lockeed Martin in 2004, is a fast, maneuverable and networked warship designed to operate close to the shore for mine warfare, anti-submarine warfare and surface warfare, according to Lockheed Martin.

About 400 to 500 sailors gathered on the pier to hear Winter, and hundreds lined up afterward to meet him.

Winter spent about 45 minutes shaking sailors&#8217; hands, and he gave each a rank coin.

He is the highest ranking official ever to visit Sasebo Naval Base, said the commanding officer, Capt. Francis Martin.

"We know the importance of what we do over here, but the rest of the world doesn&#8217;t," said Petty Officer 1st Class Deno Michaels.

"The fact that [Winter] knows what we are doing over here, when our request for supplies and logistics go up, he can stand up for it."

Winter arrived in Seoul on Sunday and made office calls to U.S. Forces Korea commander Gen. Walter Sharp, South Korea&#8217;s Chairman of the Joint Chiefs of Staff and the South Korean navy&#8217;s headquarters.

He also toured the Demilitarized Zone, met with senior U.S. Navy officials and toured two shipbuilding companies in the southeastern corner of the country.