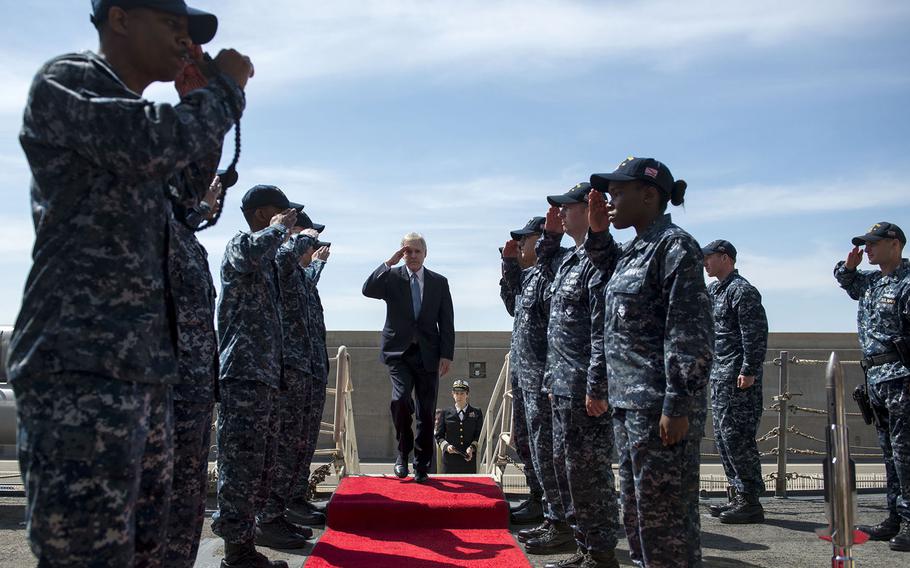 NAPLES, Italy — Deployments are up, the budget is down and retirement benefits will remain untouched.

Navy Secretary Ray Mabus covered a lot of ground in a live question-and-answer with sailors and Marines on Tuesday, even if none of it was particularly new.

Questioners asked about hair regulations, the future of women in some Navy billets and whether security should be tightened across bases following shootings in Washington, D.C., and Norfolk. Mabus said he hesitated to make installations too restrictive.

Now in his fifth year as secretary, Mabus presides over a service of more than 800,000 Marines, sailors, civilians and reservists with a budget of roughly $150 billion and a growing demand for ships and sailors from combatant commanders.

Flashpoints in the Pacific and Persian Gulf have helped drive expansion of the Navy’s fleet after more than a decade in which its numbers fell, with plans calling for the service to reach 300 ships by decade’s end. New concerns in Europe following Russia’s invasion of Crimea add impetus to contracts like the one announced Monday, for 10 new Virginia-class attacks submarines over the next five years. With more ships and more global concerns, Mabus said sailors and Marines can expect to see more time overseas.

“For sailors and Marines, we’re not a garrison force,” he said. “We will always be deployed.”

With deployment lengths already up in recent years, Mabus talked about the Navy’s new plan to standardize deployment schedules, beginning with carriers and amphibious ships. The Optimized Fleet Response Plan would attempt to fit training, maintenance and deployments around a 36-month schedule.

Mabus offered little insight into the impact of the U.S. military pact with the Philippines, and he said little about the Navy’s role in responding to events in Ukraine, noting ship deployments to the Black Sea and saying only that commanders were providing options to national leaders.

Asked by a sailor whether the service would take traditionally black and Hispanic hair styles into account when considering hair regulations, Mabus said the service was looking into the issue at the request of the Secretary of Defense. A recent Army update to its hair regulations drew complaints from some minority female soldiers.

In response to another question, the secretary said the service was continuing to open traditional male-only billets to female sailors. The Navy will open officer billets on its Virginia-class attack submarines, followed by enlisted billets on all submarines. A Navy policy change in 2010 allowed female officers to serve on guided-missile submarines, a transition Mabus said was seamless.

“The big news is there is no news,” he said.