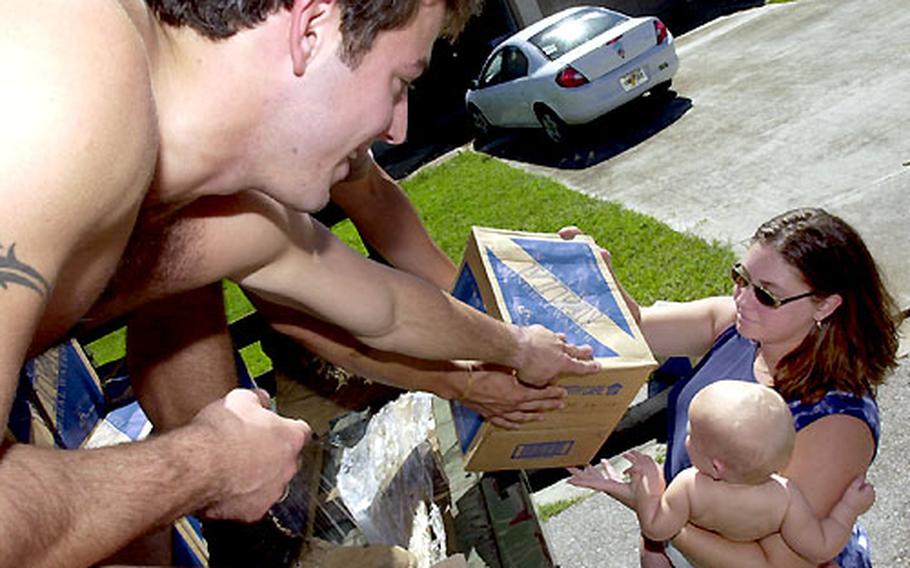 The water truck has arrived.

Members of Naval Special Warfare Unit 1 &#8212; Navy SEALs &#8212; rode around in the back of an open-bed truck on Tuesday morning, handing out water to residents of Naval Forces Marianas. Since the base is still on a boil-water notice, drinking water is a precious commodity.

Since Super Typhoon Pongsona slammed the island two weeks ago, bottled water has been airlifted almost daily onto Guam from the United States, Japan and other countries. More than $28,000 worth of medical supplies and bottled water arrived recently from Atsugi Naval Air Facility, Japan, according to a U.S. Pacific Fleet news release.

Each household at the Navy base received one gallon per person in the home, including dependents.

Spouse Leslie Pittelkow, 45, said the water truck was a big morale booster. Her neighbors looked forward to receiving the fresh supply of water, and the SEALs usually cracked jokes, she said.

But the SEALs were strictly business Tuesday: Typhoon recovery was wearing thin.

The sun beat down, and the SEALs had 260 residences to reach in the day&#8217;s water run. At each stop, handfuls of people fleshed out: a woman pulling a red wagon; a mother carrying a baby in diapers; an Army sergeant in civilian clothes; and kids of all ages.

People have been civilized &#8212; no one has squabbled over water, Martin said &#8212; but there have been a few strange requests.

The water was warm &#8212; freezers shut down with the power. But ice was available daily, courtesy of Mobile Mine Assembly Unit 8, the sailors who maintain the Navy&#8217;s stockpile of mines in the Western Pacific.

Based at the Naval Magazine, the mine men filled bags with ice every morning and stored them in the freezers that keep their batteries fresh.

Unlike most of the island in the immediate aftermath of Pongsona, the mine unit&#8217;s freezers never warmed during the power outage. Any time electricity is knocked out, &#8220;within 15 to 20 seconds, our generators kick on,&#8221; Cassidy said.

The ice was distributed at the commissary, in housing areas and at the hospital. The mine unit produced 2,000 to 4,000 pounds of ice a day.

Two out of 12 housing areas on base had running water as of Tuesday, though water pressure was low in some of them, Naval Forces Marianas officials reported.

Officers&#8217; housing in Nimitz Hill and Flag Circle was dry as of Tuesday, according to Capt. Joe Ludovici, Commander Public Works Center, Guam.

Other sources of water on base included use of a mobile machine from Atsugi that converts nontreated water or saltwater into fresh water.

Ten 400-gallon water buffaloes, flown in from Port Hueneme, Calif., after the typhoon, were set up in housing areas with flushing and potable water. Some of that water came from the USS Frank Cable, the Guam-based submarine tender. After riding out the storm, the Cable returned Dec. 12 and continued to steam in port, producing purified water for Naval Forces Marianas and the ship.

Ocean water is pumped electrically into the ship through a strainer to filter sediments and small sea creatures, such as crustaceans. The water then travels through a series of pipes and is heated to 175 degrees. It enters a compartment called an evaporator, where it immediately mists and converts to steam. The steam rises toward the cooler pipes, which contain incoming saltwater, causing it to condense into fresh water and collect like rain in a trough. The fresh water then is pumped into a storage tank, where it&#8217;s used for the boiler &#8212; which requires purified water &#8212; and when the ship is out to sea, for drinking, cleaning, cooking and showering.