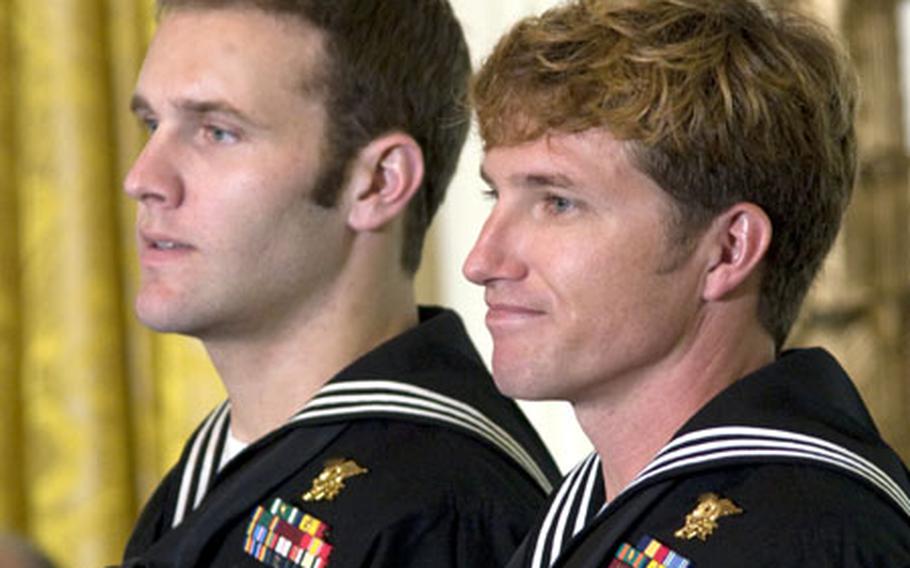 Many sailors were on hand Monday to see one of their own honored. (Joe Gromelski / S&S) 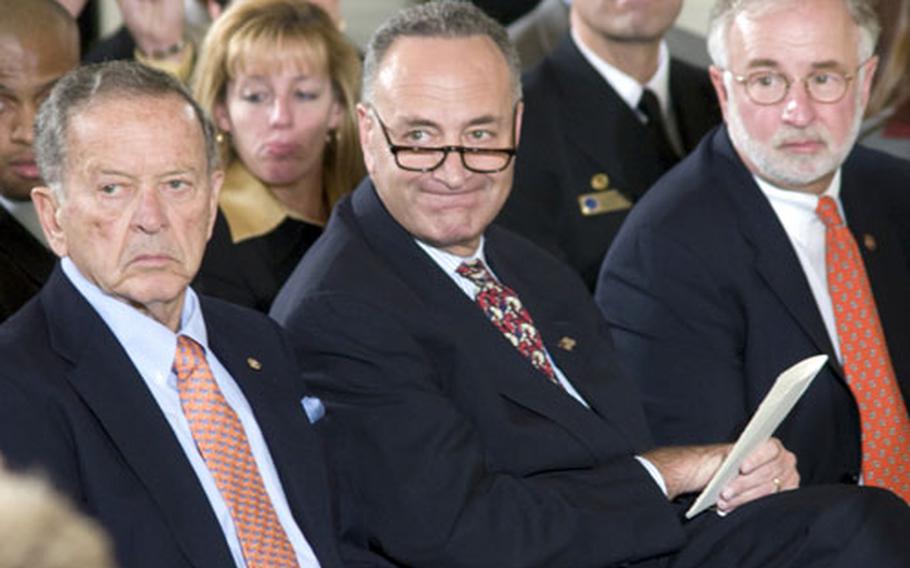 Maureen Murphy is overcome with emotion after receiving her son&#39;s Medal of Honor from President Bush. (Joe Gromelski / S&S) 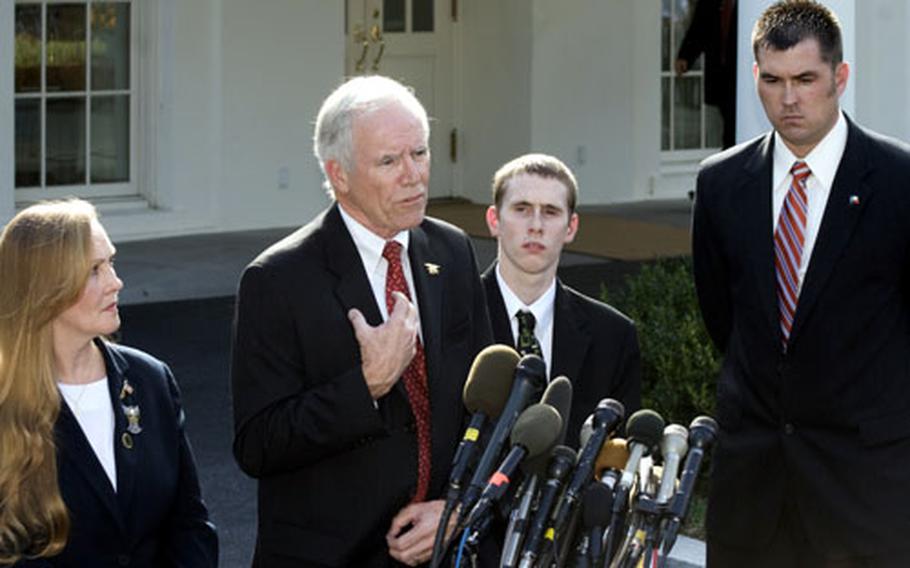 Maureen and Daniel Murphy and their son John are joined at a press conference by former Petty Officer 2nd Class Marcus Luttrell, right, the only member of Lt. Michael Murphy’s team to survive the fight with Taliban. (Joe Gromelski / S&S)

President Bush presented the award to Murphy&#8217;s parents Monday at a ceremony at the White House.

The team had come across local goat herders, whom Murphy ordered released. It is believed the goat herders told the Taliban where to find the SEALs.

Murphy exposed himself to enemy fire to call in for backup, suffering a gunshot wound to the back in the process. Yet he still completed the call.

But the helicopter carrying the Quick Reaction Force coming to the SEALs&#8217; aid was shot down, killing 16 troops aboard. It was the bloodiest day to date for U.S. troops in Afghanistan, Bush said Monday.

Bush recalled how Murphy had the respect of his men.

&#8220;They remember an officer who respected their opinions, and led them with an understated, yet unmistakable, sense of command,&#8221; Bush said.

Former Petty Officer 2nd Class Marcus Luttrell was the only member of Murphy&#8217;s team to survive the fight with Taliban.

Luttrell, who wrote a book about the event, said Murphy was a man who cared about his teammates.

Murphy&#8217;s award is a testament to his character, said his father, Daniel J. Murphy.

&#8220;I think that by the president presenting this Medal of Honor to our son, it now tells the world what Michael&#8217;s friends and we knew all along &#8212; his intense loyalty, his leadership, his devotion to his family, to his friends, to his country, to his SEAL community and to his teammates,&#8221; the father said in a phone interview Friday.

Once when Murphy was in junior high school, his parents received a call from the school principal that their son had been involved in a fight, the elder Murphy recalled. Daniel J. Murphy&#39;s voice began to break has he explained that when he and his wife got to the school, they learned their son came across three boys who were trying to stuff a handicapped student into a locker.

Murphy&#8217;s sense of right and wrong was on full display on the day he and his teammates were killed. It was Murphy who made the decision to release the Afghan goat herders who came across the team&#8217;s position, his father said.

After Monday&#8217;s ceremony, Daniel J. Murphy affirmed that the team made the right decision in letting the goat herders go.

&#8220;Marcus and Michael and the rest of the team when they were talking about this, they understood: These were non-combatants and they were going to be released, I wouldn&#8217;t expect any less from Michael to do that&#8221; he said.

Initially, Daniel J. Murphy objected to the way Luttrell portrayed the incident in his book, in which Luttrell wrote that Murphy had his SEALs vote on whether to release or kill the goat herders.

Now both he and Luttrell are in agreement that the issue was a semantic debate over the word "vote," and that while Murphy polled the SEALs to solicit their input, he ultimately made the decision to release the goat herders.

In an interview Friday, Murphy&#8217;s mother said her son should be remembered as a decent and humble and polite man.

Maureen T. Murphy said she was struck how her son was still able to end his radio call for help with &#8220;Thank you sir,&#8221; even though he had been shot.

Michael&#39;s parents discuss the pride they feel about their son

Michael&#39;s Dad talks about what Afghanistan meant to his son

Michael&#39;s Dad says Michael made the right decision to release the goat herders