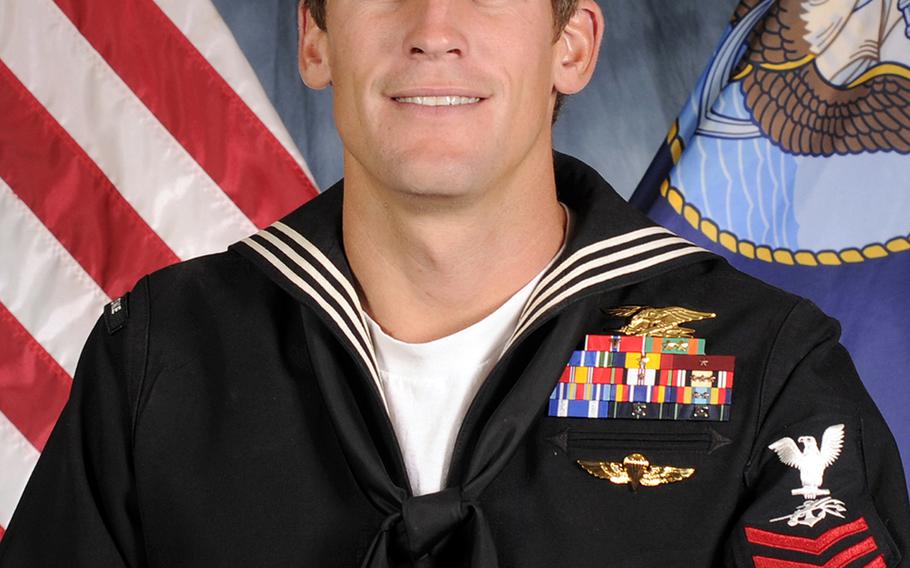 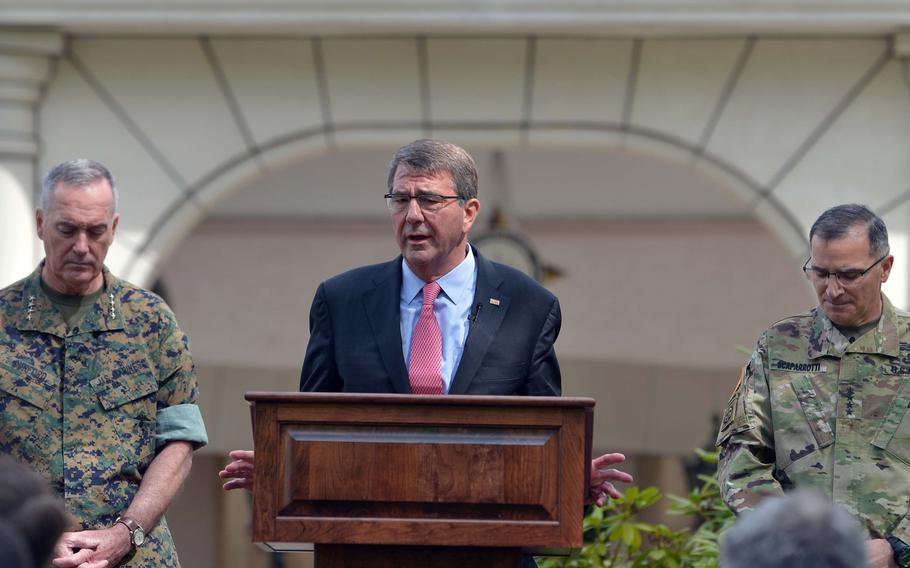 Flanked by the Chairman of the Joint Chiefs of Staff Marine Gen. Joseph Dunford Jr., left, and the new commander of U.S. European Command Army Gen. Curtis Scaparrotti, Defense Secretary Ash Carter announces the death of an American servicemember in Iraq following the EUCOM change of command ceremony at Patch Barracks in Stuttgart, Germany, Tuesday, May 3, 2016. (Michael Abrams/Stars and Stripes)

WASHINGTON — A Navy SEAL was killed in combat Tuesday during an attack by Islamic State group fighters in northern Iraq, Pentagon officials said.

The servicemember was killed near the city of Irbil, said Defense Secretary Ash Carter, who announced the death in Stuttgart, Germany, where he presided over a change of command at U.S. European Command headquarters.

A defense official, who spoke on the condition of anonymity, said the U.S. servicemember killed was a Navy SEAL.

The SEAL was identified Tuesday as Charlie Keating IV, 31, who grew up in Phoenix and attended the Naval Academy before becoming a SEAL based out of Coronado, California. Arizona Gov. Doug Ducey said Keating died in an Islamic State group attack near the city of Irbil.

Keating is the third American servicemember killed in combat since the U.S.-led coalition entered the war against the Islamic State group in 2014.

Pentagon Press Secretary Peter Cook said the incident occurred north of Mosul during an Islamic State group attack on a peshmerga fighting position. Mosul, which was captured by Islamic State fighters in 2014, is used by the terrorist group as its capital in Iraq. The city is about 50 miles west of Irbil, which is Iraqi-controlled and used by U.S. forces to train Iraqi forces.

Cook said the servicemember worked as an adviser to the peshmerga, a Kurdish fighting group that has been a close ally to the United States and considered the most effective fighting force in northern Iraq. He was working at a position located about three to five kilometers behind the peshmerga’s front lines, Cook said.

Another defense official who spoke on the condition of anonymity told Stars and Stripes that the incident occurred at about 9:30 a.m. Tuesday after Islamic State group fighters attacked. Two defense officials said Islamic State fighters used vehicle-borne explosives to breach the peshmerga’s front line and then were able to reach the SEAL’s position, where he was killed by small-arms fire.

At the time, U.S. and coalition jets provided air support to help peshmerga fighters counter the offensive. Using F-15 fighter jets and drones, they conducted 23 airstrikes during the fight.

The official said he did not know how many peshmerga fighters were hurt or killed in the attack. He also said no other U.S. casualties were known at this time.

U.S. forces are moving closer to the front lines as they assist the peshmerga and Iraq’s 15th Army Division in preparing to retake Mosul, which has raised questions whether U.S. forces are back in ground combat in Iraq. On Tuesday, Carter was direct in his assessment on the loss.

“It is a combat death of course,” he said.

The death comes after a recent announcement that the United States would send an additional 217 troops to assist in the fight to retake Mosul, most of whom are expected to be Army Special Forces, Green Berets.

Capt. Jeff Davis, a Pentagon spokesman, said Monday that the 217 troops are not in Iraq yet.

The United States is also sending $415 million to the Kurds to help pay for supplies for their forces and recently authorized providing hundreds of armored vehicles and millions of rounds of ammunition to further bolster the peshmerga.

In October, Master Sgt. Joshua Wheeler, a member of the Army’s Delta Force, was killed during a rescue operation to save hostages held by the Islamic State group. In March, Marine Staff Sgt. Louis Cardin was killed in a rocket attack at Fire Base Bell in northern Iraq.