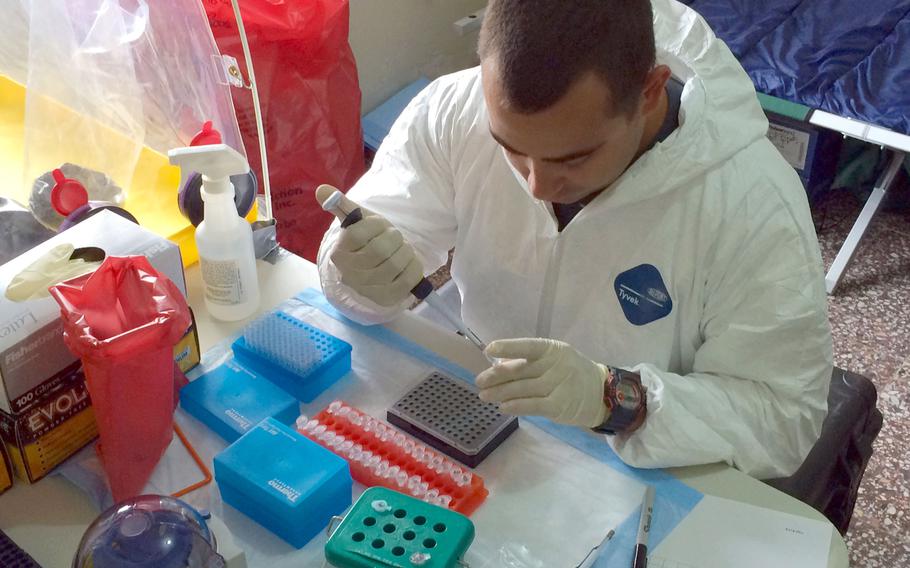 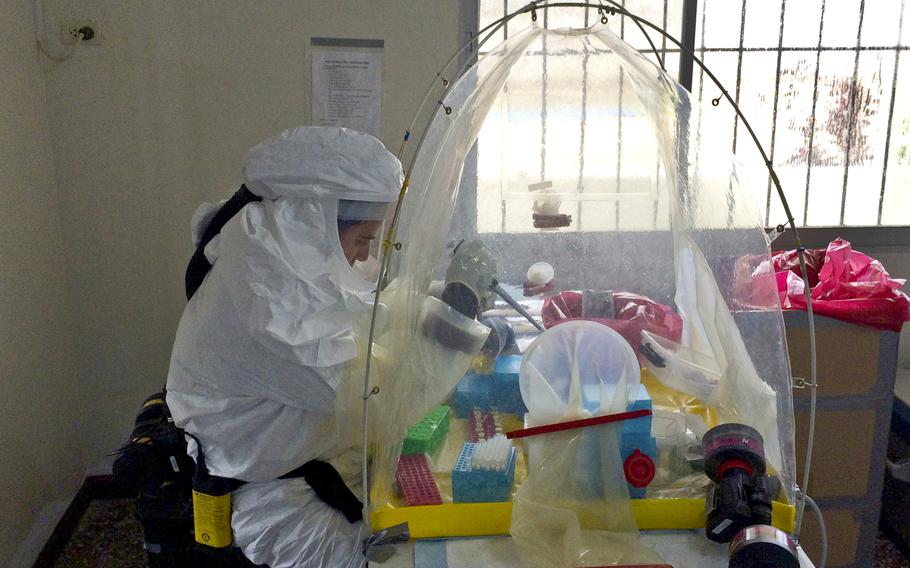 A little over a year ago Jose Garcia, a microbiologist with nearly 10 years of hard science training, walked into a Navy recruiting station in San Diego on a whim.

He was in California on a post-doctoral research fellowship when he decided to investigate career options with the Navy.

“I happened by chance to go by a recruiting office and asked ‘What are the opportunities you have right now for scientists?,’ ” said Garcia. At first, the recruiters didn’t have an answer, but then a few days later they called with an offer for a microbiology billet.

“It’s been great. I never would have pictured myself in Monrovia five years back, but here I am,” said Garcia, now a lieutenant who was commissioned into the Navy in July 2013.

Since arriving in Monrovia, Liberia, in early October, Garcia and other members of a small team of Navy researchers have been on the front line in the fight against the Ebola virus, which has killed more than 4,500 people across western Africa this year.

Garcia, who serves with the Naval Medical Research Center out of Silver Spring, Md., works in one of the Navy’s two mobile testing labs in Liberia, testing blood samples for any sign of Ebola. He is among a small cadre of U.S. military personnel in direct contact with the virus. Currently, six Navy technicians are working in the two mobile labs virtually nonstop. In the coming weeks, four more members will arrive to augment the unit.

So far, the Navy team in Liberia has processed more than 500 samples since the labs stood up at the start of October. Garcia estimates 40 percent of the samples test positive for Ebola. However, since many of the specimens are repeat samples, it is difficult to say exactly how many individuals have tested positive, Garcia said.

Federal health officials on Monday issued new guidelines to promote full-body protection for health workers treating Ebola patients, The Associated Press reported. The guidelines call for full-body clothing and hoods that protect the neck and set strict rules for removing equipment, among other rules. While the Navy personnel are not treating Ebola patients, they also have strict procedures they must follow to avoid contracting the virus. The scientists wear special suits, three layers of gloves and an air-purification respirator. Once the protective gear is donned, Garcia goes to work on the blood samples, taking a series of steps to render samples safer for further analysis.

“We’re able to basically sequester the genomic material out of the blood samples,” said Garcia.

From there, the researchers can pinpoint if Ebola is present.

For the sailors, the biggest risk of infection occurs when they take the suit off after testing is completed.

To get undressed, a two-man team goes into a decontamination room, where they spray each other down with a special bleach solution. The suits are then incinerated.

“The chances of me contracting the virus are minimal as long as our safety protocols are strictly adhered to,” Garcia said. “This is where trust in your team comes into play. Up to now we’ve had zero incidents of anyone getting sick and we plan to keep it that way.”

In recent weeks, a handful of Ebola cases in Texas have sparked a wave of anxiety across the United States. In response, President Barack Obama recently named an Ebola czar to coordinate U.S. containment efforts.

However, at ground zero in Monrovia, Garcia says he goes about his daily business unafraid. The sailor-scientist, who works in a house next door to World Health Organization doctors from Uganda, said the multinational effort to counter the virus has resulted in a sense of community.

“We’ve made good contact with the locals. We carry on conversations, and even the other day they brought us fruit. ... They know you are there to help,” Garcia said. “It’s not the zombie apocalypse.”

Still, the signs of a health crisis are all around the city.

“Everywhere you turn in Monrovia there are hand-washing stations that contain bleach,” Garcia said.

In Monrovia, no one shakes hands.

In the meantime, Garcia said his focus is on staying sharp inside the lab, where any lapse in focus increases the risk.

“You have to be on your game at all times because, of course, you are working with a very deadly pathogen,” he said.