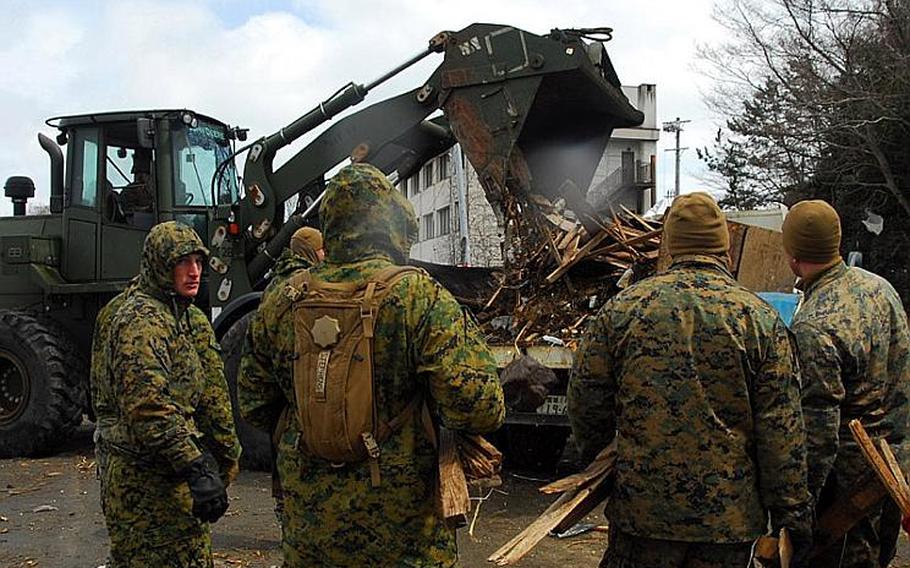 Marines with the 31st Marine Expeditionary Unit use a bulldozer to clean up debris on Oshima Island, Japan, on April 4. (Eva Marie-Ramsaran/U.S. Navy)

Marines with the 31st Marine Expeditionary Unit use a bulldozer to clean up debris on Oshima Island, Japan, on April 4. (Eva Marie-Ramsaran/U.S. Navy) 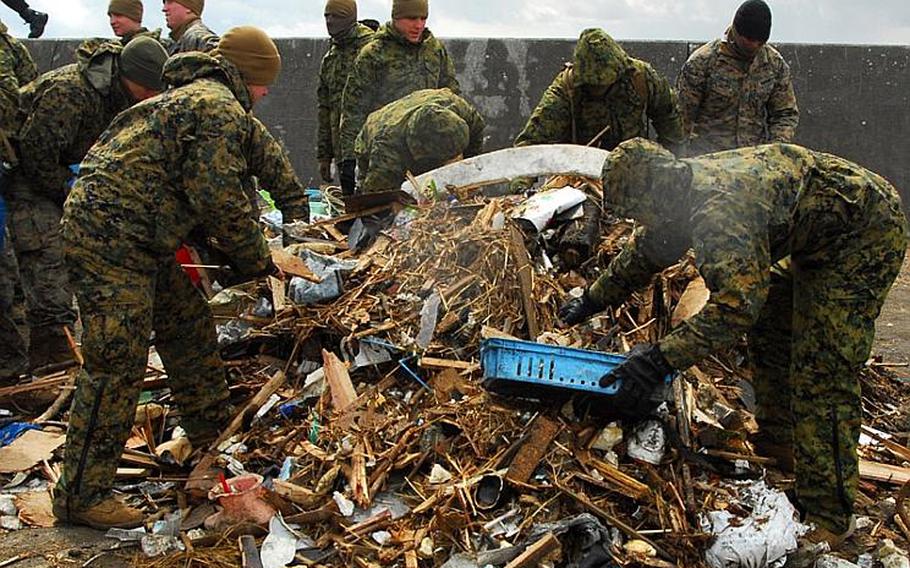 Rear Adm. Jeffrey S. Jones speaks with members of the 31st Marine Expeditionary Unit about ongoing disaster relief efforts on Oshima Island, Japan, on April 4. Sailors with the USS Essex and Marines embarked on the ship finished their work on the island on April 7. (By Eva Marie-Ramsaran/U.S. Navy)

MISAWA AIR BASE, Japan &mdash; The U.S. military continued to downsize its participation in humanitarian relief efforts in northern Japan on Thursday, as the USS Essex and the embarked 31st Marine Expeditionary Unit completed work on Oshima Island.

The ship &ldquo;was released from Operation Tomodachi&rdquo; on Thursday morning, according to Navy spokesman Lt. Justin Hadley. He declined to say where the Essex was headed, citing Navy policy of not discussing future operations.

The USS Tortuga and USNS Safeguard remain in the area, working port clearing operations on Oshima and nearby Kesennuma, Hadley said. The flagship USS Blue Ridge is the only other 7th Fleet ship still supporting the overall operation, Navy officials said.

At its peak after the March 11 earthquake and tsunami battered northeastern Japan, the Navy had 22 ships, 132 aircraft and more than 15,000 personnel working the operation, according to a Facebook post from 7th Fleet Commander Vice Adm. Scott Van Buskirk. The fleet delivered more than 260 tons of relief supplies, flew 160 aerial reconnaissance missions, searched more than 2,000 square miles of ocean and helped clear harbors, according to Van Buskirk.

But as the situation on the ground improved, and roadways were opened to the hardest-hit areas, need for the U.S. military support lessened, according to Navy officials.

&ldquo;The Navy is often going to be your first team in there when infrastructure is not functional and roads are blocked,&rdquo; 7th Fleet spokesman Cmdr. Jeff Davis told Stars and Stripes when the USS Ronald Reagan carrier group ended its relief mission earlier this week. &ldquo;The roads have become opened, and the [Japan] ground self-defense forces are getting in there. In the end, over land is much more efficient.&rdquo;

Oshima Island was devastated by multiple, giant tsunami waves spawned by the early afternoon earthquake March 11. When the Essex sent personnel to island March 27, the island still had no electricity.

Sailors and Marines from the Essex Amphibious Readiness Group joined with Japan Self-Defense Forces to transport more than 15,000 pounds of relief supplies, as well as vehicles, trucks and Japanese Tohoku Power Co. workers from ship to shore. By 5:30 p.m. that day, electricity was restored.

&ldquo;The moment power was restored, (people) heard cheers of joy from the local residents,&rdquo; Masanori Ide, a liaison officer involved in the power-restoration effort, was quoted as saying in a USS Essex news release.

U.S. personnel continued with clean-up efforts throughout the stay, and more than 300 sailors and Marines helped clear debris in Uranohama, Yogai and Komogata ports and Kodana beach.

On Tuesday, they were able to set up portable water heaters and showers, the first available on the island in nearly a month, according to an update posted on the 7th Fleet&rsquo;s Facebook page.

&ldquo;For many island residents, the showers were the first opportunity to become clean since the tsunami hit on March 11,&rdquo; according to the update.